Prof. Avoke And Others, Invade University of Education, Winneba (UEW), With Hired Thugs 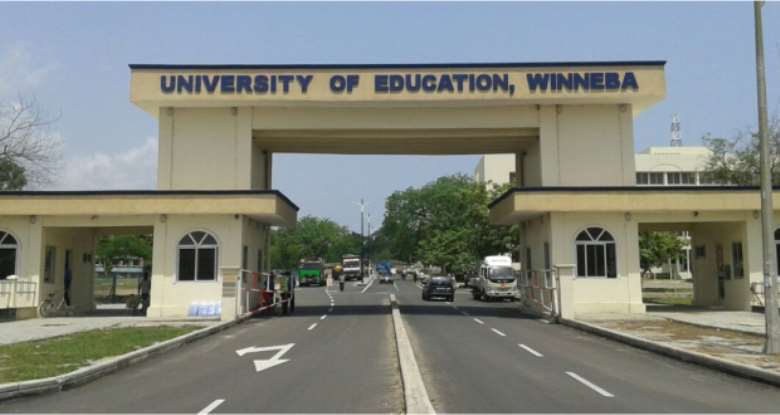 At about 10.30am on Tuesday 23rd July 2019, I received a phone call from an unknown person who later identified himself as Atta Mensah, a former NDC Youth Organizer for Effutu Constituency, desperate to arrange an urgent meeting with me. This is the same guy who was allegedly paid GHS100,000 by Alexander Kwamena Afenyo-Markin and Theophilus Ackorlie, on Sunday 14th July 2019, to solicit his help in deploying thugs to destroy lives and property at the University of Education, Winneba (UEW). I turned down the meeting request. My concerns are legitimate, so I don’t require the services of nation wreckers.

Earlier in the day at about 9.30am on same Tuesday 23rd July 2019, a close pal, who is a journalist working with one of the reputable media houses, sent me audio recordings of one Evans Otabil and Francis Bolley, who are part of the communications team of the outgoing Member of Parliament (MP) for Effutu and beleaguered Board Chairman of the Ghana Water Co. Ltd (GWCL), and who called the said journalist, inviting him to a Press Conference in Winneba later the same day.

Based on the above evidence, the events of the 23rd of July 2019 at UEW, are the machinations of Afenyo-Markin, and no one else.

It is now appropriate to refresh readers’ mind. When Hon. Martin Amidu secured a Supreme Court order against Alfred Agbesi Woyome, to pay GHS51m back to the State, did the State forcefully attempt to cease the properties of Woyome?

In addition, the Court processes that led to Prof. Avoke, being injuncted on 14th July 2017, started in May 2019. Why didn’t Afenyo-Markin forcefully attempt to remove Prof. Avoke from office as VC of UEW, immediately following his application for an injunction against Prof. Avoke and Theophilus Ackorlie?

To borrow the words of Asiedu Nketiah, aka General Mosquito: “Any idiot can go to court”. Earlier, an idiot parading as Theophilus Adepoju, sued UEW, and Rev. Fr. Prof. Afful-Broni, the undisputed Vice-Chancellor of UEW. Among the several reliefs sought, was an injunction against Rev. Fr. Prof. Afful-Broni from continuing in office as VC of UEW. Why didn’t the mentally unstable Afenyo-Markin, who was Lawyer for Adepoju, together with Prof. Avoke, and the other equally mentally unstable lot, invade UEW to reinstate themselves immediately following the filing of Adepoju’s suit at the Winneba High Court? It is worthy to note that this case has been rightly thrown out by the Winneba High Court.

The case was filed on 23rd July 2019. Immediately after the case was filed at the Winneba High Court, Prof. Avoke, led a bunch of yobs and other people of low intelligence, to invade the north campus of UEW, purposely to hold a Press Conference at the Council Chamber and declare himself, Vice-Chancellor of the University of Education, Winneba (UEW). In the demented Prof. Avoke’s mind, just by simply filing a Court process, amount to the granting of an injunction.

To finish Prof. Avoke off, even if an injunction was granted against Rev. Fr. Prof. Afful-Broni from continuing in office as VC of UEW, which Court or legally constituted body, has ordered the reinstatement of Prof. Avoke as VC of UEW? Discerning people, would no doubt, question the credentials of Prof. Avoke.

Furthermore, Kingsley Amoakwah has defrauded some staff of UEW, colossal sums of money, under the guise of acquiring land for them. Pressure is being put on him, to refund these moneys.

Therefore, the argument by the Winneba Municipal Police Command that they received a distress call from UEW, which they responded to, is untenable, for I was personally present, from the start of events at about 1.30pm to the point where normalcy was restored around 4pm, same day by Police personnel of the Swedru Divisional Command, and some National Security Operatives.

It is not far-fetched to conclude that the confused Prof. Avoke, together with his zombies, have been bitten twice by the common criminal, Afenyo-Markin. For this was the same conman, who procured the services of Supi Kofi Kwayera to front as the applicant in the case that led to Prof. Avoke and Theophilus Ackorlie, being injuncted from continuing in office as VC and Finance Officer of UEW, respectively.

The same Lunatic Afenyo-Markin, has again managed to fool the miserable Prof. Avoke and his bunch of empty heads, to invade UEW, and reinstate themselves to their previous positions, as if there are no laws governing this country. What a shame! And Mawutor Avoke, is a Professor?????

It is on record that Mawutor Avoke, Theophilus Ackorlie, Frank Owusu Boateng, Daniel Tetteh, and Mary Dzimey, challenged their dismissal by the UEW Governing Council at the Cape Coast High Court 2. After almost a year of legal gymnastics, the Court is set to deliver its ruling, on Tuesday 30th July 2019, just a week away. Why couldn’t Mawutor Avoke, and the other dismissed officers, respect themselves and wait for this ruling if they honestly believe that they were wrongly dismissed?