Why Professor Muhammad Yunus Is My Favourite Professor In The World 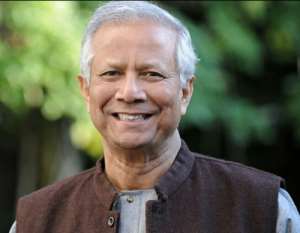 I actually hate university education, especially in Ghana. Our university education is backward-looking in nature; it teaches undergraduates what to think, and not how to think. No wonder I proudly dropped out of university since it offered me no special kind of education. The lecturers are highly opinionated professionals who seek to mould university students into inflexible beings — of course, there are exceptions. I had the chance to be lectured by a science professor during my first year in UCC when I read "Wildlife Utilization" as a liberal course. Frankly speaking, I believe Prof. Monney is a great intellectual by all standards; his sense of reasoning always amazed me and the whole class. Yet he is so unbending and uncompromising towards the primitive methodology for teaching and learning in UCC. In fact, he is a perfect epitome of who a typical Ghanaian professor is.

Anyway, I think I like him. And I also respect professors such as Prof. Allotey and Prof. Frimpong-Boateng, who are among Africa's greatest academics in our contemporary world. Prof. Allotey is the originator of "Allotey Formalism," which is a technique used to determine matter in outer space. Prof. Frimpong-Boateng is also arguably the first black man to perform a heart transplant. However, Prof. Muhammad Yunus, a Bangladeshi statesman, is my favourite professor in the world. He defied the odds in his conservative profession, and created an entirely new system that had a far-reaching impact on millions of people in his country. He proved to the world that the professor could be an unparalleled change leader, and not a mere theorist stuck on a university campus. Although his net worth would not make him a billionaire, he is credited with socially entrepreneurial works that made him a titan in business circles.

Alright, Prof. Muhammad Yunus is a 76-year-old social entrepreneur, banker, economist, academic, and civil society leader. I sincerely regard him as the world's greatest social entrepreneur. Why? He pioneered microcredit through Grameen Bank that alleviated poverty, and financially empowered millions of poor folks in Bangladesh. Mr. Yunus stated that he lent $27 of his money to 42 women in a village during his research project about poor traders and their access to credit in 1976. According to Mr. Yunus's profile on Wikipedia, "Grameen Bank originated in 1976, in the work of Professor Muhammad Yunus at University of Chittagong, who launched a research project to study how to design a credit delivery system to provide banking services to the rural poor. Based on his results, in October 1983 the Grameen Bank was authorised by national legislation as an independent bank."

Moreover, Grameen Bank offered microcredit — without collateral security, and with more flexible payment plans — to poor traders in Bangladesh who were not creditworthy in traditional banking. He and the Grameen Bank team gave the poor a fair opportunity to focus individually on business initiatives to gain income in order to repay their loans. So Grameen Bank placed a premium on empowerement of an entrepreneurial nature — not donating cash as an act of charity. Besides, their prime objective has always been to aid poor people to attain financial independence. Prof. Yunus once declared, "This is not charity. This is business: business with a social objective, which is to help people get out of poverty," emphasising that, "Charity only perpetuates poverty by taking the initiative away from the poor."

Also, it is on record that by July 2007, Grameen had issued $6.38 billion to 7.4 million borrowers. Interestingly, Muhammad Yunus's perception of poor people and poverty simply flies in the face of the conventions. Prof. Yunus could state that, "If we want to help poor people out, one way to do that is to help them explore and use their own capability. Human being full of capacity, full of capability, is a wonderful creation." Again, he once said, "In my experience, poor people are the world's greatest entrepreneurs. Every day, they must innovate in order to survive. They remain poor because they do not have the opportunities to turn their creativity into sustainable income." I dare say that this man has unbelievably redefined poverty, and refuted the capitalist school of thought on poverty.

Well, most people strongly feel that poverty cannot be eradicated from the face of planet Earth. But Prof. Yunus believes otherwise; he proclaimed, "Poverty does not belong in civilized human society. Its proper place is in a museum. That's where it will be." Yes, he has clearly blazed the trail for others to contribute towards that Herculean task. It is not surprising that he was awarded Nobel Peace Prize (2006), Presidential Medal of Freedom (2009), and hundred other honours across the world. Finally, Professor Muhammad Yunus is a very rare global hero whose unthinkable works will forever be etched in the memory of billions of folks worldwide. And I highly recommend his mind-blowing books "Banker to the Poor" and "Creating a World without Poverty" to well-meaning social entrepreneurs in particular.