Nana Konadu Agyeman Rawlings Is Not The Problem 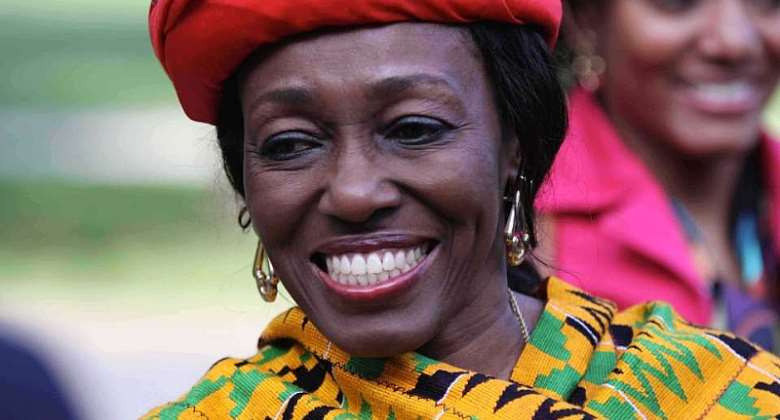 In the last few days, there have been a barrage of attacks on the person of Nana Konadu Agyeman Rawlings. These attacks were in response to a demand made by the former National Democratic Congress (NDC) member of parliament for Ningo-Pampram, E.T. Mensah, who was urging the NDC as a party to apologize to the former first lady and her husband for the ill-treatment meted out to them by party functionaries (Link available here: http://dailypost.com.gh/2017/02/26/apologize-mrs-rawlings-et-mensa-tells-ndc/ ).

In one of the responses to E.T. Mensah, Anthony Nukpenu, Greater Accra Regional Organizer of the party rejected the call, indicating that “the return of Konadu will have no bearing on the future of the NDC.” (Available at: http://www.ghanaguardian.com/call-beg-konadu-irrelevant-ndc-et-mensah/ ). In another piece on Facebook, one Michael Jarvis Bokor corroborated the position of the Greater Accra Regional Organizer of the party, but not without the usual personality attacks that are associated with how political differences are settled in the Ghanaian political milieu. Even though we are not a spokesperson for the first family, we find the two responses quite impertinent and would like to respond to them in this article.

First, it must be pointed out that what lies ahead of the NDC is not about whether Konadu returns, the manner in which she returns, and when she finally makes that return. The issues are: why and how did she leave the NDC in the first place? Can we confidently say that the conditions that necessitated her departure from the NDC and that of many others have been adequately dealt with or those conditions still exist in the NDC? How can the NDC work to ensure that those conditions are removed from party management and administration? The desire to vote and be voted for is a political right guaranteed by the 4th Republican Constitution of Ghana.

If these premises or principles hold true, then indeed Nana Konadu Agyeman Rawlings had done nothing wrong by deciding to contest the late Professor John Evans Atta Mills for the flag-beaership position of the NDC, a party she belonged to, if that was the basis for departure from the NDC. The same can be said of Ekwow Spio-Garbrah and many others, including, recently, George Boateng who wanted to contest the then-candidate John Dramani Mahama.

And then what? In the event that we respond to this question either in the affirmative or the negative, then we would have individuals such as Bokor and Nukpenu on the frontlines attacking any suggestions that do not seem to advance their interest, even as the NDC party begins its painful journey in opposition. The question journalists should be asking these individuals is whether Konadu, Spio-Garbar, and Boateng had any rights, by being members of the NDC in good standing, to contest for any position they wished to in any NDC election. If they did, then why the rancor, the hate, and the bullying and intimidation that they had to endure, leading some of them to consider leaving the party and forming their own party?

We think it is too early in the day for Nukpenu and Bokor to continue throwing innuendoes at individuals whose politics they may disagree with. Being in opposition can be both teaching and learning moments, when lessons learned can lead to the correction of mistakes and the closing of the yawning gaps between and among factions within the party. This is not just for the sake of the unity required to confront a ruling government with all the resources at its disposal, but this is also required for the strengthening of party structures for the party’s own sake.

To do this, there is the need for the party to reflect on its managerial and administrative process, identify the bottlenecks that created the ground for individuals like Konadu, Obed Asamoah, the late Josiah Aryeh, Bede Ziedeng, Goozie Tanoh and many others to leave the NDC to form their own parties, join other parties, or remain apolitical. Did Bede Ziedeng not follow Dr. Obed Asamoah to form the Democratic Freedom Party? When the NDC won in 2012, was he not rewarded by the Mahama-led administration with a Ministerial appointment? What informed the decision to bring him back even though he contested the 2012 election on the ticket of the DFP, in opposition to the NDC? How much did his work in opposition cause the NDC then? Even today, the NDC continues to make untoward sacrifices for such personalities (Please follow the link to four executives of the party in Lawra who have been deposed because of conflict with Bede Ziedeng here https://citifmonline.com/2017/03/08/lawra-ndc-sacks-four-executives-for-bede-ziedengs-defeat/ ). Is it a matter of selective justice? Or, the hate, the greed, the arrogance that drove the NDC into opposition have combined to blindfold some upstarts who now have the audacity to even control the thought processes of party members. How on earth can a party executive threaten an elder party member in the person of E.T. Mensah of dismissal for simply voicing out what would be considered his opinion on party matters at a time when the party is still soul-searching to come to terms with its recent defeat? Even though we have never been admirers of E.T. Mensah and his kind of politics, it is obvious that the Greater Accra Regional Organizer of the party is not helping the cause of the party with his arrogant and ill-informed posturing!

The NDC in Disarray
Instead of thinking of ways to make the party relevant by offering credible opposition to the ruling party, it is disheartening to watch the leadership that led the party into opposition to continue to foist its poor judgment and decisions on the party. We are not sure these folks appreciate the magnitude of the damage they have done to the NDC as a party, its representation in parliament, and the implications of a weak opposition to the political processes of Ghana. In the Ghanaian political setup where parliamentarians vote en bloc in support of their side, it is obvious that the NDC has handed the NPP a carte blanche legislative process to do whatever it wishes to do with its majoritarian 168 seats against the NDC’s 107 (a difference of 61 seats). As if that is not enough, the lack of coordinated management of party affairs, self-conceit among some members of leadership, and poor research even among the ranks of leadership is also threatening to erode the credibility of the party itself. Some of the following statements and events affirm this position:

As one reads some of these tactless, vacuous, and unapprised statements from the current NDC leadership, one begins to wonder what forms of research informed some of these tactless statements. The recent bribery accusation which has divided the NDC in parliament has also exposed the lack of coordination within party leadership even in opposition. Worse of all, it is disheartening to watch the crestfallen national organizer of the party, Kofi Adams, and others calling for the return of John Dramani Mahama to contest the 2020 on the NDC ticket, as he is the only hope for the NDC for the 2020. The question is: WHAT SORT OF RESEARCH INFORMED THESE TACTLESS STATEMENTS? If Kofi Adams and Joseph Yamin are aware of the causes of the NDC’s defeat and recognize that only John Mahama can save the party in 2020, what then is the task of the 13 member committee led by the Kwesi Botchway? It must be pointed that the position taken by these individuals is an insult to the committee! Indeed, these are some of the attitudes and behaviors in the management of the party that culminated in its massive defeat in the 2016 general elections. Don’t tell us the 2017 budget is “419 or Kasapa” budget, give us the economic forecasts that are likely to make the NPP fail in implementing its budget to improve our lives as citizens and offer alternatives. If the NDC were retained in the 2016 general elections, they would have read the budget. What budget would they have presented to ease their ostentatious foist on the poorer Ghanaian? Would they have made trotro fares free instead? Would they have made public toilets free instead? Or, they would have presented every Kayayo with a head pan? Don’t tell us Ghanaians are losing hope in the NPP in its one month in office. Tell us what you can do to offer a better alternative to the status quo. And don’t tell us the NPP has avoided its promises in its budget, we can read and appreciate that. Tell us why they have avoided those promises and what the alternatives are. For Kofi Adams and Joseph Yamin, it is unfortunate that after leading the NDC to its lowest ebb, they have failed to utilize this learning moments appropriately.

The NDC grassroots must begin to demand accountable leadership from its privileged leadership. Accountable and constructive leadership means conducting research on matters, coordinating efforts of party file and rank to ensure there is consensus on important issues, and understanding the task that is ahead of the party with its lean numbers in parliament and a party in disarray.