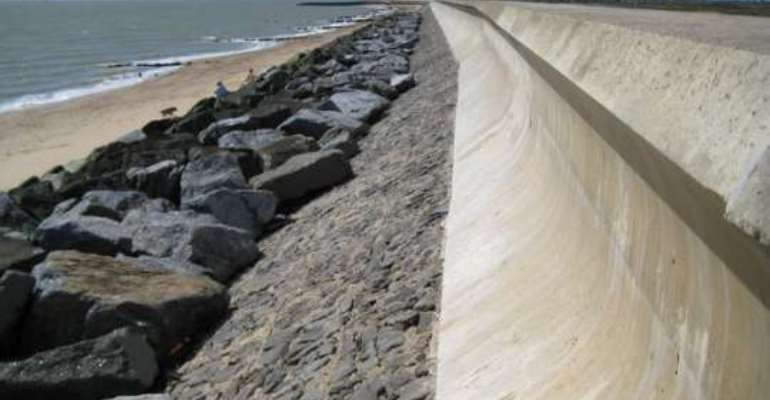 Keta is a low-lying coastal town along the Gulf of Guinea. It used to be one of the biggest commercial centers between the city of Accra, in the Gold Coast, and Lagos in Nigeria. It attracted businesses in between these two cities and beyond. But due to its low-lying nature and closeness to the sea, rising seas levels have eroded most part of Keta leaving a strip of land between the sea and the Keta lagoon.

Being the hometown of Ghana’s former president, Jerry John Rawlings, Keta attracted extra attention, not just because a vital commercial city of Ghana is being washed away by the sea, but for the political reason of being the hometown of the former leader. For a very long time, the erection of a sea defense wall to protect what was left of the once buoyant commercial center in West Africa became a political entanglement, just like any issue of the day. As usual, political promises for the erection of a sea defense wall were made repeatedly throughout the 1980s. But it was the latter part of the 1990s that the project finally received government approval for construction works to begin.

This was not without the usual political threats of losing votes if the project was not commissioned to begin. There were tales about how a fishing harbor was to be constructed as a component of the project. Many thought that should be a laudable idea – you do not only protect the remaining strip of land, but you regenerate the towns along the coast by providing a livelihood.

The project was completed after the 2000 elections in Ghana. When the then NDC government lost power to the NPP, it was rumored that the harbor component of the project was truncated by the new government. It was one of those political issues that gained currency so quickly that it added to the tall list of reasons why the people of Keta, like many communities in the Volta Region, should consider the NPP inimical to their interest. Whether a harbor component was conceived as part of the project by the government or not, it makes an economic sense to have included this component to the US$85 million project.

Any visitor to the Keta area in recent days would admit that assets or infrastructure in the whole of Keta and it’s environ may not amount to half the amount spent in erecting the Keta sea defense wall. While this may not be a good reason to have neglected Keta for the sea to ravage the strip of land that was left of it, it is obvious that the project should have been considered, to some extent, on economic basis. There is no doubt that it is not all investments that have economic viability; some investments may have economic viability from the word go, while others would have economic or political necessity. The Keta sea defense must have fallen within the category of projects that would pass as having political necessity and lacking economic viability.

This project can be considered a political necessity than an economically viable one for the reason that the sea defense wall has not been able to regenerate Keta and provided livelihood to the people of the area, even though it must have hampered the rapid erosion of the remaining landmass of Keta. Clearly, a fishing harbor component would have provided a livelihood to the people of Keta and its surrounding who are mostly fisher folks and farmers. This way, taxes from the use of the fishing harbor and its facilities would have provided a financial stream to the local authority and the government from which some of the investment in the project can be recouped over a period of time.

However, as it were, obviously, the project must have served its political and humanitarian purposes of winning votes and protecting what is left of Keta, but not an economic one of regenerating Keta and its environs.

On one of my recent visits to Keta, two friends visited me where I was lodging. By 8:30 P.M. when we went out looking for beer to entertain ourselves, it was like finding a needle in a haystack. The town itself was dead, without any sign of night life. So, as I normally do, I broached the topic on the economic viability of the Keta sea defense project and reminded my friends of the quantum of investment that went into saving that piece of land. Both friends agreed that other alternatives should have been considered for saving the people of Keta, including relocating the people and creating a new livelihood for them.

From a comparative perspective, in January 2016, the United States, as part of a federal program to help 13 states adapt to climate change, allocated grants totaling $1 billion through the Department of Housing and Urban Development to states that are beginning to feel the direct impact of global warming. Isle de Jean Charles in Louisiana, a community that is almost submerged, like Keta, as result of global warming received $48 million to relocate as climate refugees. The conclusion I came to after the US recorded its first climate refugees is that if even the US with all the economic and technological muscle could not save Isle de Jean Charles, then less economically and technologically endowed nations like Ghana must critically examine some of these projects, like that of Keta, before dumping millions of dollars into such projects, as global warming would continue to exact its impact in the years to come. I hear every now and then Keta is flooded in spite of the sea defense wall.

With sea levels projected to rise over this century and longer periods due to global warming (range 2.9-3.4 + 0.4-0.6 mm per year from 1993-2010. Values for predicted sea level rise over the course of this century typically range from 90 to 880 mm, with a central value of 480 mm), there is no doubt that most towns and cities along the shorelines of coastal countries like Ghana will continue to face perennial flooding and some of these towns and cities will finally be submerged in the near future, if global warming is not reversed. It is projected that a city like New Castle in the North of England will be submerged completely in the next fifty years if nothing significant is done to hamper the rising sea levels.

Ghana’s coastlines are not immune from these global phenomena. From Aflao in the East to Elubo in the West, it is apparent that rising sea levels pose a great threat to communities, towns, and cities along the coastlines of low lying areas. We have sank US$85 million at Keta, €183 million at Ada, US$41 million at Dzita. Our harbors and fishing harbors have their own capital intensive investments. Are there ways to consider these investments in ways that they also bring some returns or are considered on true merit? Or the political nature of these investments, which I consider as “vote attracting investments,” will continue without considering the merits of these projects in the truest sense of the word.

In the run-up to the 2012 general elections, a group of NDC conmen stormed the Keta and Anlo constituencies promising the people that the fishing harbor project was about to take off. It was definitely one of those vote buying exercises. The exercise successfully achieved its goal of getting the votes. But it has once again scarred the conscience of a people who have been deluded and sacrificed on the altar of political expediency by their own many a time.

With the prospects of discovery of oil in the Keta basin, one was of the view that funds could be raised to help finance the long-cherished dream of the people—the building of a finishing harbor. But, once again, the dreams of the people have been dashed. The contractual agreement with regard to the onshore drilling in the Keta basin reveals that the communities in and around Keta stand to benefit nothing from this new project. The projected financial benefits from the project have been channeled to the bank accounts and financial portfolios of particular families and their cronies, a development that the people must rise up against and the incoming administration must abrogate with immediate effect.

It is no wonder that a section of the people of Keta, similar to other communities in the Volta Region, chose not to come out at all to vote in order to protest the NDC’s empty propaganda in the area. As the new administration, led by Nana Addo Dankwa Akuffo-Addo, begins to take shape, they should be reminded of the very things that made the people of Keta and other communities in the region to reject the NDC’s naked propaganda, a situation that has impoverished the people for years. It is heartwarming to hear that the president-elect is on a mission to make the Volta Region his pet political project. We welcome him wholeheartedly, but we also urge him to make the effort to understand the local politics in order to tackle some of the longstanding issues that have made the region a no-go zone for the NPP for many years. Let’s make politics a competitive venture in the Volta Region.