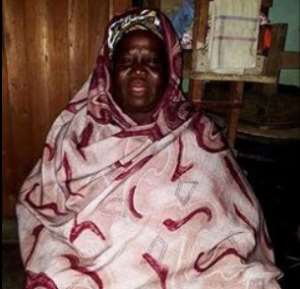 I have no spiritual powers. I am a mere mortal. And as I once told a friend, I believe I am very low on the spiritual ladder. I have no divine power (in fact, no human has). Those who claim to have that eventually find themselves powerless and kowtowing to the Master diviner when they are lowered into their graves.

But as human as I am, I perceive people who are righteous based on my interactions with them. This presents no difficulty as the qualities of the righteous are profoundly outlined in the Holy Scriptures we have. And as a Muslim who subscribes to the dictates of the Qur’an, I believe the righteous do not die.

The Holy Qur’an says “Do not think that those who are killed in the cause of God are dead; they are alive at their Lord, being provided for” (3:169)

I therefore believe that “The righteous do not die, when their lives on this earth come to the predetermined end, the angel of death simply invites them to leave their earthly bodies and move on…. “

Thus, I am vehement in my belief that Mman Gausu as she was affectionately called was a righteous woman and I have a wishful belief that she is part of the above category.

She was human and may have many imperfections, but that even confirms her status, a human being. And humans are not perfect. However, even in our state of imperfection, some exhibit Angelic qualities that are worth mentioning and revering. Some are God-sent and are absolutely irreplaceable when they are gone. None matches them in their qualities and none rivals them also. Mman Guasu stands among these.

I schooled at Tafsiliyya School for Training and Education during the weekends from when I was the age of two. We had our break time starting from mid-day and lasting for an hour. Those were the times we met together as friends to refresh ourselves, rekindle our spirits and refuel our bodies with food. There were lots of foods available for sale. But only one place called us from that tender age till a few years ago. And that was Mman Gausu’s beans and plantain. She could be found down the post office street in Nima.

It was not by default that we almost always found ourselves there. It was by an unspoken economic design. Our ‘pocket monies’ could hardly afford those other foods in town to meet our level of satisfaction. So we needed food that will best be described as ‘take me to the night’; because of how your belly will be full even with the little amount of money. And Mman Gausu came in handy. She was generous in her serving. Her plantain alone could make a whole meal. Let’s not even talk about the yam which we always left in the bowl due to how over-satisfied we were. The queue that one meets there alone tells you there is a ‘fire on the mountain’ that only Mman Guasu could quench. Especially on Fridays when the prayers are done in the afternoon. One would think the whole Nima is buying her food. It is not out of place that some have described her as “the mother of Nima.”

We fell head over heels in love with the food to the extent that even when we grew older and had extra coins to spare, we always found our way there. Her food was absolutely irresistible. Regardless of how cheap it was, it was a very sumptuous meal. And she was as always accommodating except when you try misbehaving. You will not find where your bowl landed after it is thrown. That is when you misbehave.

Some of the comments that were made after I posted the issue of her death on Facebook alone confirm it.

One said “She has kept our souls moving all this while by selling beans to us with her gargantuan plantain.” Another one reads “She has really helped some of us back in the days. Mman Gausu has helped her community very well with respect to thu’aam (food in Arabic). “I eat free beans and plantain all the time so I save my chop money” and this is a former SRC President of one of our Universities speaking. The one that made me sadder was “If you live in Nima and you are broke, it’s only your pocket that will be empty and not your stomach. Mman Gausu’s beans is very affordable but one of the best. She is arguably the most popular food seller in the hood because of her generosity, dedication and service to her customers. She is dead but her legacy will remain, for I believe the food joint will continue to exist. ” A Mighty tree has indeed fallen!

In any serious community, a monument of repute will be erected in honor of this honorable soul. It may be a school named after her or the street that lines her house or anything of honor that will serve as memento of her existence on this accursed place called earth. And this quest will be spearheaded by the leaders of the community; pulling everyone along to keep the magnanimous flames of the woman burning aloft. This will keep her vibrantly alive though she is gone to the shores of the afterlife. It will forever make her live amongst mortals though she has become a nonviable. To me she was more valuable than all the politicians we had in our community lumped together.

A brother captured it well for us.
“ The death of Mman Gausu, a Humanitarian and a prominent cooked beans seller who was based in Nima, leaves only one thing on the back of my mind:

For everything good that we have been called upon to do while alive, we must ensure we act upon it with all our hearts and all of our strengths. She virtually saved lives with the services she offered, so sad we couldn’t take her away from the wicked clutches of death. Anytime we set eyes on where her iconic body usually sat as she engaged her numerous customers, we would remember a woman who lived so others could also have life.”

May her soul rest in absolute serenity!
NB: The writer is a Nima boy who really depended on her beans to survive.