Thoughts Of A Nima Boy: The Zongo Inter-Tribal Gala: Congratulations To Coach Winter 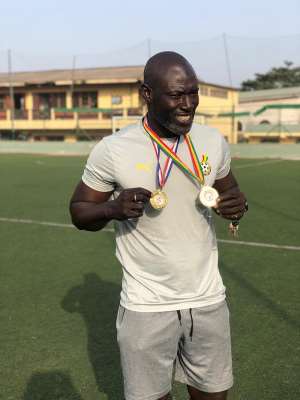 Growing up in Nima, most of the conversations I have heard and had about ‘heroes’ is centered on thuggery. How Inusah went to this area and stabbed Mubarak with a knife or how Abdul Rahim dragged Sulley on the street or how a group from another base led by Alhassan came to conquer this base or how Ampalalu rode his motorbike and jumped the big Nima-Newtown drain and a whole lot of uninspiring stories. Nothing about how one used his talent positively, how one used his compassionate nature to save a life, how a Nima boy proved his intellectual worth or how the whole world was stunned by the massive display of positive potentialities by our youth.

Unfortunately, this fed into the reportage of the mainstream media. A whole lot of negative reportage against the community. I once witnessed a minor disagreement at the Nima Roman Catholic church over the late arrival of ballot boxes at some polling centers. It was later reported in the media as if there was a pogrom. This is surprising because we have a lot of people who made giant strides in the development of our nation coming from Nima.

But we must leave a great portion of the blame on the doorsteps of the inhabitants of the Nima community. How we have conspired to resign themselves to the savagery in the community should be in contest for a wonder of the world. We have blamed several governments for our own orchestrations, we have described Members of Parliament as derelicts in their duties, we have blamed every government official but us. Our attitude as a people is appalling. We, as a people “have held our mouths open for a very long time that a roasted partridge flew into it” as our elders stated in their wisdom to demonstrate how slothful and irresponsible a person or people could be to allow a rotten situation like our society.

Earlier this year, a video came out that was as scary as it is condemnable. It was a video that showed how backward-looking the community is turning into. It was a video of a group of hoodlums in the community shooting indiscriminately into crowds in the name of a clash. Those who were not shooting wielded cutlasses and other weapons slugging it out in the streets, in the full glare of young ones. I got saddened as I saw the video. And to add insult to injury, when one of the hoodlums got a bail, the community was happy that he was out. What level of barbarism!

It is against this backdrop that I became elated sort off when I saw the flyer for a soccer competition amongst the youth in the community few weeks after that above-mentioned imbroglio. It was dubbed The Zongo Inter-tribal soccer gala. This was the second edition, and it was created to foster and enhance the unity and cohesion in the community. It was organized to give impetus to the English statement that ‘variety is the spice of life.” The Quran stated that mankind was created in tribes and clans just for identity. Not for unnecessary competition or worse case hate and war crimes as exhibited in Rwanda some years ago. The competition which started few weeks ago came to an end few days ago. It saw an exhilarating series of soccer matches with an overflowing sea of spectators each day of the gala at the Kanda Cluster of Schools Football Park. The winner of the contest was the Moshie tribe. It was a team of young talented, underdogs who dazzled and sparkled everyone with their performance all the way to the final to lift the coveted trophy. Many accolades have been given to them and many praises. But one thing that stands tall is their coach, Ibrahim Abubakar Ganam. And I intend to dwell more on him in this piece because we really must celebrate our local heroes. We must do that to inspire a gale of good acts within the community. There are a lot of good men and women who unfortunately have been silenced by a few ‘madmen’ who are running the community. We must, therefore, identify them and trumpet their works to the world.

For two consecutive editions of the gala, he has led the teams he coached to the finals and won it. The last time he did it with the Zabarma team and this time with the Moshie team. He not only wins matches, but he wins them with some verve, finesse and panache. He does it with some style, as champions do. Born in the seventies. His schooling activities from Kanda Cluster of Schools to City Academy were filled with his passion, Sports. He loved the adrenaline sports came with, the competitive spirit and discipline it imbues in a person. He played soccer with the school’s team and helped the City of Ghana Academy to chalk an enviable feat in the Inter-Schools competition those days. The stuff he learnt from been a sportsperson will come in handy later in his years as a community coach.

Beyond soccer, he played volleyball, and did athletics in his life until he developed interest in bodybuilding. He used to train with a man in a gym at Kanda though not professionally. However, that brought him into contact with a rugby select side from the United States of America and their coach, Philip Turkson who taught him the Science of Weightlifting and the nitty-gritty of fitness Instruction. According to him, body building is one of the most expensive sports in the world. Therefore, he had to work to support his passion. So, he started work with a company at the Tema Harbour as a Security before he was promoted as a supervisor. He worked with them till 2015 when he decided to go into fitness instruction full time. He therefore began organizing people in the community to take them through aerobics. He has held aerobic sessions with corporate organizations, fitness clubs and trained many youth who are now professional instructors in the security services. He is now in charge of Get Fit gym at Accra Newtown. He is also a Health motivator, everybody’s friend in the community, respectful to the young and old alike and to him, dialogue is key to solve issues. No need to take up arms. He believes strongly that “to jaw-jaw is better than to war-war.” He has in his core belief, to push the youth to their highest potential. That he believes will make a beautiful community.

As to what his secret is, he stated that ‘Discipline’ is his cornerstone. Discipline has been the hallmark of his teams. And coming from a Fitness Instructional background, he tries to infuse that aspect of his trade, the quality which dissipates tension, that quality which separates the successful and the failures, that ingredient which he believes the community needs to grow and blossom, discipline. He tries to infuse it into his teams. And it has always paid for him.

NB: The Writer is a Community Organizer, a Youth-Activist and a Student of Knowledge.

Your boos reflects the voices of the citizens; forget the se...
3 minutes ago

Our SinoHydro road projects has silence NDC, when we talk th...
26 minutes ago