Thoughts Of A Nima Boy: An Interaction With The Former Dutch Mp Who Became A Muslim Whilst Writing An Anti-Islam Book 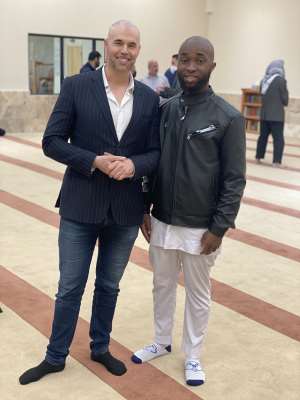 Last Friday, the Muslim Students’ Association of the University of New Mexico climaxed its Islamic Awareness week with a colorful programme in one of the ballrooms of the Student Union building. The programme, a departure from the usual programmes held by the organization in the sense of participation was heavily attended by the Muslim community of Albuquerque. They all thronged in individually and in families because of the glorious case of a miracle in the life of the main speaker for the day. They came in to have a first-hand interaction with the man who has become a victim of what he spent almost all his life criticizing. They came to see the man who had a volte-face in his outlook, belief and stance on religion and its concomitant issues. They came to see the man who has profoundly exemplified the effect knowledge has on people. He has shown that knowledge dispels all darkness and affects in the least, the life of human bodies, the beat of the human heart, illumination of the soul and the enlightenment of the human consciousness. A biographer of the Holy Prophet once said that “without a doubt, ignorance is one of the most chronic causes of lethargy, conservatism and prejudice; and it is the most difficult to correct.” Indeed, most difficult does not in any way show impossibility and the life of our main speaker for the day proved that.

His introduction alone captures the whole story and purpose of his travel from Europe to a small city in the United States of America, Albuquerque. He started, “my name is Joram van Klaveren, and I am a former member of the Dutch parliament who represented the Party for Freedom, the anti-Islam party of Geert Wilders. I even was the spokesperson of the Party when it came to islam-related topics. For years I gave everything I had to fight Islam. I tried to make legislation to shut down all Islamic schools in the Netherlands. I attempted to close every mosque in my country, and I even tried to ban the Quran.” That was an interesting introduction considering the point that he now stands a proud Muslim, conscious and actively involved in its propagation.

Joram was a very active and articulate member of parliament who considered it as a moral obligation to ward people off Islam, a ‘thing’ he considered as the deadliest political ideology in the world. He was convinced beyond reasonable doubt that Islam was violent, promoted terrorism and an establishment that was anti-women, anti-Christian and anti-Semitic. There was no ravine, riverine, valley, town, city, community, radio, television show, school or university in The Netherlands that has not received or provided host to Mr. Joram in his travels to spread his political message which had the deliberate, corporate, annihilation of Islam as its crux and focus.

According to him, he came to have such sense of utter distaste, fervid repugnance, strong feeling which gets him struck with revulsion at the mere mention of Islam because of certain ideas that are influenced by the conservative protestant theology of his upbringing. These theological teachings consider Islam an evil cult because of its strictest sense of monotheism which utterly rejects the trinity, the divinity of Christ, the atonement and concept of Original sin. He believes the aversion Europeans have towards Islam that has become cultural in outlook and violent in practice stems from the many historic clashes with the Ottoman Empire and remnants of this can still be found in many books, theater and even in some foods.

He recounts “remarkably, my first day as a student of comparative religion was September 11, 2001. Many horrors would sadly follow, in and outside of Europe. From the murder of columnist Theo van Gogh (near my old House in Amsterdam), kidnappings, anti-Semitic terror and beheadings, to haphazard stabs, truck attacks, the proclamation of the caliphate by ISIS and suicide attacks. There were even Muslims from the Netherlands who travelled as Jihadists to Syria. The combination of all these factors (the anti-islam theology of my specific church, the cultural aspects and of course terrorism) confirmed and deepened my negative feelings about Islam in such a way that I became active for the most anti-islam Party of Europe. I believed that Islam should be fought wherever possible.”

In 2017, he left parliament and saw it as an opportune time to fulfil his long-held desire, to write an anti-Islam book that would provide conclusive theoretical groundings for all the objections he held against it as a politician. The book, he believed would settle once and for all his crusade that Islam is a danger for The Netherlands, for Europe and for the whole wide world. But as he began writing his anti-islam book, he came across information stood antithetical to his beliefs and that many of the ideas he held had little or no basis in historical Islam. His research brought him in sharp focus to contexts and interpretations that were worlds apart from what he had taught and spread for years.

This piqued his interest and he decided to learn more. He began writing to various academic authorities in Islam (specifically Professor Abdul Hakim Murad of Cambridge University) who pointed out books, facts and other scholars he should consult and read again, more profoundly. This began to open his eyes to some of the positions he held in the past, his perspectives of Islam began changing and gradually his objections to Islam vanished. The wealth of knowledge he gleaned from these books broke down very strong and negative emotions he had towards the religion.

With the statement once shared by Goethe, that quotes “the mind once stretched, never returns to its original dimensions” in action, Joram began to find answers to specific dogmas such as the Trinity, the Crucifixion, atonement, Original sin etc. which have been wrestling his mind from a young age. And he described the answers he got as “surprisingly satisfying.”

Religion as described by Emile Whitehead “is seeking comfort in a world which dispassionately considered, is a terrifying wilderness.” And that was what Joram’s initial intention to write an Anti-Islam book turned into. He stated that “all that I was learning about Islam influenced my work on the book in such a way that it began to take on the character of a personal search for God.”

He took up a special interest in the character of the Prophet Muhammad and he saw in him something more special. “A man with almost supernatural patience, care, love, guidance, and above all dedication to his God and to his mission for justice.” He got struck with the story of Hind (the lady who ordered the killing of the Prophet’s uncle, parted his chest and ate his heart) and later got forgiven. That strong character of love, that overflow of compassion and massive show of humanity shook Joram’s image of the Prophet. “Since I had never lost my faith in God, and by writing this book I could no longer refute the prophethood of Muhammad. I was led to Islam in a very natural and rational way”, Joram concluded.

Still harboring some doubts because of the pressure of having do a kind of activities and specific rituals, it looked so difficult to him. However, two remarkable things happened which removed all shred of doubt from his heart. The first was the saying of the Prophet which beautifully touched his heart. The Prophet cautions all Muslims to “make things easy for the people, and do not make it difficult for them, and make them calm (with glad tidings) and do not push them away.” These words, he said took away a big obstacle because it emphasized how Islam shows believers the way they should live the religion (not how some Muslims practice it).

The second one was when he stumbled on verse 46 of chapter 22 of the Quran which stated profoundly that “it’s not the eyes that are blind, but the heart.” This to him was the last push. He observed “because that really was my problem: I could see what I had written down about the truth of Tawheed and the true life of the Prophet. Nobody forced me to do it, but I still couldn’t accept it because my heart was closed. But when I read that passage it was as if some turned the key and opened the door.”

Now Joram Van Klaveren is a Muslim and has established the Islamic Experience Center, which visits schools throughout The Netherlands to provide them with an experience that shows how influential Islam is in order to create a more positive image of it. This reduces the ignorance, fear and insecurity about Islam.

In reflecting on the whole process, Joram feels ignorance had clouded his mind and blinded him from the truth. And he feels it is knowledge that has opened the door for him, and it is what will open the eyes of many in the West. “Where feelings and emotions are often subjective, knowledge is objective. It has the power to bridge gaps. To counter populist politics, lazy journalists and irrational fears. But sadly, enough a lot of times there is nobody with knowledge to share, and to enlighten those who live in ignorance.” Knowledge indeed, is light.

NB: The Writer is a Community Organizer, Youth-Activist and a Student of Knowledge.