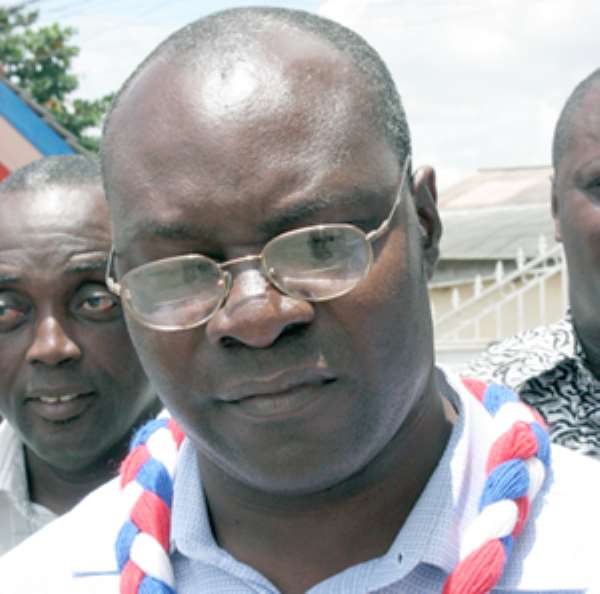 The gentleman in question is a worried and estranged soul. He desperately seeks political relevance amid his self inflicted alienation within his own political party. Across the rank and file of the NPP, most members still consider his person and views weightless relative to his contributions to the NPP's loss of the 2008 general elections and other irrelevant events he singularly masterminded.

Despite his botched presidential ambition in 2008, he seems to nurse a tinge of taste for the presidency and to stage a political comeback into the NPP space that appears to have no jolly avenue for him.

Therefore, in a bid to pick up his old-world of fame which is thickly constipating, he doodles abominations that rather defile his depreciated integrity in the NPP. In his murky fantastic world, he exhibits his prolific doodles that only arm his political opponents to mar the electoral fortunes of the NPP and that of Nana Akufo Addo.

In fact, this man has been the sole beneficiary of his own actions despite the bogus claim that he performs those activities in the name and for the progress of the NPP. As he accrued lots of coins from the sale of his popularly but untimely book (Chasing the Elephant into the Bush) partly due to the generosity of the NDC, Nana Akufo Addo and the NPP on the other hand in 2012 staggered under the pressure of NDC propagandists' salvos that were harnessed from that book.

Aside these oddities, he continuously festers without measure into a cancerous liability in the elephant fold. His recent outburst that the NPP is disunited after a successful conduct of a congress to elect Nana Akufo Addo as the flag bearer of the NPP clearly demonstrates that this man is belated or misinformed of the events within his own party.(See: Arthur K: NPP deludes itself to claim it is united, www. graphic.com.gh/news)

Interestingly, the things he communicated as the way forward to strengthen the NPP in its unity drive are old wounds that have healed or almost healed. The overwhelming and unparalleled support the Nana Addo- Bawumia ticket is basking in should tell Arthur K that his unrestrained paranoiac overtures must be shelved in his trembling bosom.

Admittedly, every political party is not free from internal party squabbles. The NPP has had a fair share of it. But the beauty in the midst of these frictions has to do with how the party is resolves it. Clearly, the NPP has peacefully held its congress despite the dissenting voices. So, Arthur K's hollow posit of disunity in the party is an overblown figment of his imagination and without any credible merit.

Personally, I think the root undergirding Arthur K's attempt to court public attention especially persons within the NPP stems from the fact he is being haunted by his past diabolical infractions that have ostracised him into political oblivion. One cannot lose sight of the point that prior to Nana Addo's selection to lead the party, he and Nana Ohene Ntow led a strong aversion campaign to discredit the former.

He cannot, therefore, turn around and assume the status of a unifier or claim to have antidotes to the perceived problems in the NPP when he, through his thoughtless actions, has armed the NDC with missiles to hack Nana Addo's presidential ambitions.

For now, it will be in his own interest and that of the party he professes to love if he limits and filters his public utterances. Internal party resolution mechanisms and channels of communication can best serve his interest as the party vigorously gathers steam to wrestle power from the incompetent NDC government.

Additionally, a word of caution or advice: since he appears to be the proverbial, 'simpa panyin' who speaks and nobody seems to heed, it will be prudent for him to hibernate from now till election 2016. If the suggested is too hard to keep, then he should apply himself in whatever form to making Nana Addo the preferred choice among the pack of politicians to lead Ghana.

Presently, the serene air of unity prevailing in the NPP can only be fouled by party men who have an exaggerated opinion of themselves. Party delegates have spoken and their verdict is a call for party leaders, elders and executives to galvanise their efforts for the ultimate: political power.

For now, the floating voters are keenly following proceedings within the NPP. An attractive Nana-Bawumiah pair is an incentive that entices floating voters to vote for the NPP. Arthur K's disunity effusions are a disincentive in the midst of ex-president Kuffuor's unflinching support for the pair. Mr Alan K's support pledge for Nana Addo should put to rest Mr Arthur K's troubled heart.

Well, if Arthur Kennedy still will want to revive his sinking and constipated fame in the NPP, he must descend from his comfy citadel, stop ranting the needless disunity cacophony in the NPP in both the print and electronic media by physically putting his shoulders to the NPP wheels.

He must exhibit his loyalty and commitment to the party he belongs to by joining the political train that has gathered momentum to garner political power. His seemingly gabble sidelines and over the bar comments will not serve the party's interest.