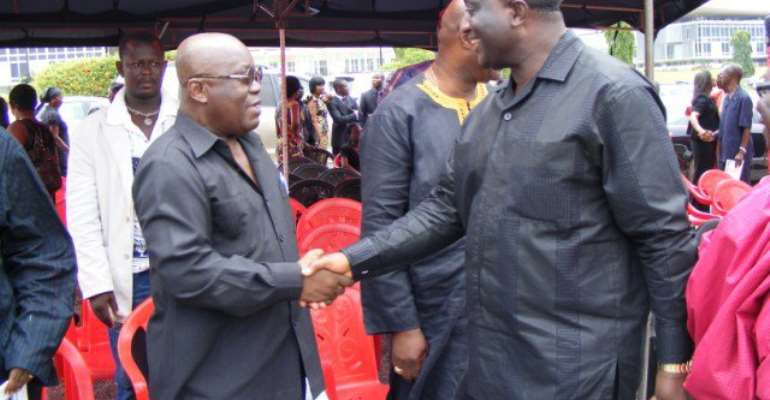 For now and some years to come, these two ostensibly enigmatic personalities have become or are becoming a political phenomenon in Ghana's political and academic space. This is as a result of their intriguing manoeuvrings towards the ultimate: political power.

It is apparent that Akufo Addo is a refined older horse and more experienced in the race to the Flagstaff House which Mr Asiedu Nketiah, the General Secretary of the NDC, in his unusual political best described as a hencoop.

Let no fanatic of Mr Alan Kyeremanten stupefy themselves with the deception that their boss can lead the NPP in the 2016 presidential election. In fact, it will rather take an extreme oddity of a political miracle for the tide to turn in Mr Alan Kyerematen's favour currently.

The force of Nana Addo's tsunamic landslide victory (at the just ended super delegate) that sent severe shockwaves to Mr Alan Kyeremanten and his stiff-necked cohorts should be an ample testimony of the fact that Akufo Addo is a man of the people. That is the plain truth Mr Ohene Ntow and many of his ilk must sincerely admit in order to avoid the needless verbal attacks on Akufo Addo's personality.

In this regard, certain political caricatures within the elephant fraternity must be reminded that they cannot dim Akufo Addo's moment-of-glory-strides to the Flagstaff House with their singular egotistic dreams of arriving at the same political venue.

Even the opposition NDC have honed and hatched strategies to retire Akufo Addo before and after the 2016 presidential elections. This is simply borne out of the fact that Akufo Addo will lead the NPP in that election.

Interestingly, if one listens closely to most of the NDC communicators and propagandists, one clearly perceives a strenuous and vile effort to discredit Akufo Addo. It is obvious Alan Kyeremanten is a grain of sugar in their political concoctions.

So, that which baffles me is the premeditated attempts by certain known 'Alan voices' to unduly and negatively tag Akufo Addo with gibberish despite his soaring popularity within and outside the NPP. Could this be the handiwork of some external influential hostile hands to thwart Akufo Addo's victory?

One would have thought that the uneasy calm and politicking (in the face of the government's poor economic management) would be managed in a manner that will put the presidential candidate of the NPP in a positive stead to garner political power. But what do we see?

For me, it is crystal clear that the 'Alan Voices' have come to the bitter and sudden realisation that should the NPP win the 2016 general elections, the presidential dreams of Mr Alan Kyeremanten will stretch further into the deep and obscure arena of the dream world. If that is not the case, why are they at each other's throat?

Without a shred of doubt, Mr Akufo Addo's victory in 2016 will obviously project further some personalities like Dr Mahamudu Bawumia, Mr Joe Ghartey among others into the political limelight. It is also possible, in my wildest guess, that Mr Akufo Addo will run for a one term as a president or complete his two terms after which he will hand the political baton to someone else (preferably Dr Bawumia) without grafting Mr Alan Kyeremanten into his succession plan.

Could this be the rationale behind the vile cacophony directed at Mr Akufo Addo to stain his moment and image which may result in his defeat in the 2016 general election? Are there attempts to clear Mr Akufo Addo from the political path to pave the way for Mr Alan Kyeremanten in the 2020 general elections as the presidential candidate?

Aside these assumptions, I cannot fathom or marshal reasons why Akufo Addo will be so much vilified within his own party. His perceived internal opponents were made to share to some extent his political table in the 2008 and 2012 general elections. Therefore, Mr Arthur Kennedy's warped effusion to the effect that Akufo Addo is not all inclusive does not wash.

There is time for everything under the sun and I think this is the moment Akufo Addo should be peacefully ushered and presented to Ghanaians as the man to revive the economy. Beyond 2016, should Akufo Addo be defeated in his third political war, his presidential ambitions become dead. He may retire and assume the enviable position of a party elder.

Why then the rush? One thing I know for sure about the NPP is that the party members largely reward long service and unflinching commitment.

Hence, Mr Alan Kyeremnaten and his cohorts should not jeopardise their immediate good standing and long service to the party by discrediting Mr Akufo Addo. When his dreams are fully ripe in the hearts of the members of the party just as Mr Akufo Addo's dream is ripe at the moment, nothing shall cloud Mr Alan Kyeremanten's opportunity to govern Ghana when his turn is due.

As a result, it is prudent to surmise that for the sake of Ghana's political growth and the longevity of the elephant fraternity, the vulgar 'Alan voices' must strive to keep Mr Akufo Addo's moment untainted and Mr Alan Kyeremanten's dreams alive.