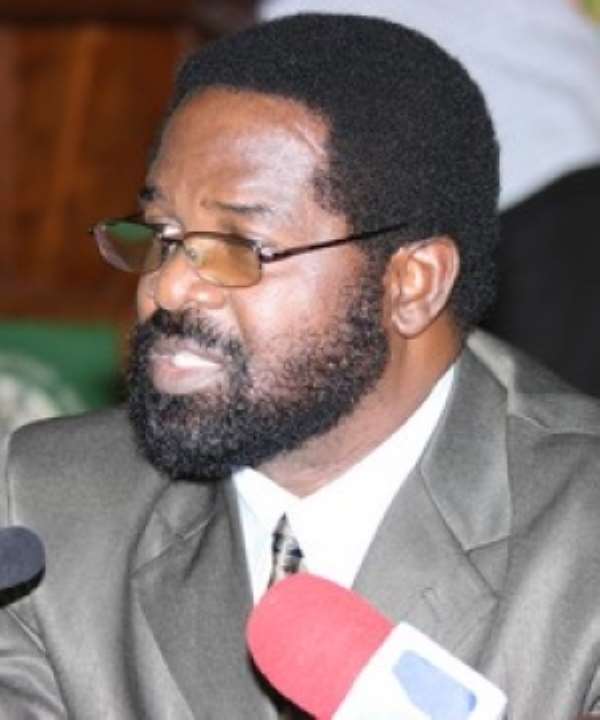 It is increasingly becoming evident every day that the mayor of Accra, Mr Oko Vanderpuije, is overwhelmed by the enormity of challenges bedevilling the city he presides over. Therefore, most of the actions he officially embarks on end up in failure and stir up ridicule.

He is simply bereft of ideas, lacks the verve and the technically competence to tackle the mountains of rubbish that are dotted all over the city which have created another murderous monster in the form cholera.

In this regard, what is the President doing? Is the President waiting for another disaster to submerge the capital city before the inert Mayor is given the sack? The President must bear in mind the Mayor's ineptitude or inertia or both has or have resulted in his ungraceful descent into the filthy gutters of Jamestown to scoop silt and other objects that are unmentionable.

The hollow excuse that the President's action was symbolic, for my money, depicts a cosmetic political exhibition carved out of a propaganda stunt that will not generate the desired impact. This is a result of the fact that city authorities who are paid to keep Accra clean but are ineffective have not been sacked. They have rather been emboldened to act with impunity in the face their crass incompetence.

That is why the Mayor in his usual display of unbridled power and crude temerity can cause the pointless arrest of a reporter and some television crew members from the Multimedia outfit. They went there with an innocuous cause to report on the deplorable plight of the homeless Ghanaians who were displaced after their makeshift structures in Mensah Guinea, a settlement in Accra, were destroyed by the AMA. (See: Accra Mayor Arrests Journalists, www.peacefmonline.com)

If the Mayor had any pure stream of sublime proaction undergirding his tactless actions, the obvious action that should have been adopted by city authorities was to put in place a pro tem measure to resettle the affected persons before the demolition jaunt.

Now, these poor citizens have been left helpless, hapless and battered by the vile vagaries of the weather. The open air has become their (displaced settlers) abode. There are no social protection or intervention schemes for these unfortunate third class citizens who are being ruled by an insipid social democratic government.

The nauseating aspect of this whole drama is, during the 2012 election campaigns, these same bourgeois social democrats never deemed the occupation of that area by these poor persons as improper but stormed that area without bulldozers to garner for their votes. What, therefore, has changed?

So, can Mr Oko Vanderpuiye point to any practical assistance that the displaced persons have been given to mitigate their sordid conditions? What the AMA did will only aggravate the mess that they (AMA boss and cohorts) sought to correct.

A classical exemplar to buttress the above assertion was how Mr Oko Vanderpuiye in his stupor of over zealousness wanted to rename the national hockey pitch after the late Professor Evans Atta Mills when the said hockey pitch had already been named after Madam Theodosia Oko.

The heroic image of this elderly woman who designed the national flag of Ghana was nearly pushed into the dark annals of the country's history if the President had not intervened to maintain the status quo that the Mayor earnestly wanted to alter to please his faceless benefactors. The President eventually had to apologise to this venerable woman for the sacrilege of his appointee.

Surprisingly, the Mayor, consumed chiefly by smugness and self inflicted shame, never rendered any unreserved apology for his needless action. The President also was never heard or seen openly reprimanding the Mayor for that singular and reckless action.

Beyond this, the Vice President has had a fair share of the Mayor's incompetence and passive steps towards keeping the streets of Accra in pristine condition. Following the outbreak of cholera which was as a result of the crushing filth in the city, the Vice President had to issue a ten day ultimatum to the AMA to rid Accra of filth. What has become of that order? Has the filth conundrum witnessed a positive turn?

By the way, must the Vice President issue an ultimatum before frantic steps are taken to keep the streets and suburbs of Accra clean? The systemic failure at the AMA headed by Mr Oko Vanderpuije must be corrected and the correction must start with the direct dismissal of the head of that state institution. Anything short of this will only be a repetition and recycling of acts that will clearly make the President unpopular.

If the President wants to remain politically relevant and not descend into the political gutter of defeat, he must act swiftly by ensuring that he either sacks the Mayor, lasso him to his proper position or reassign him as most of his actions rather sculpture the President as an emblem of scorn.

The President's recent action of sacking four DCEs due to their incompetence must be extended to the AMA headquarters for sanity to prevail. Otherwise, the Mayor's apparent slumber on his job and poor work ethics will cause the President to intermittently descend into gutters and drains to scoop silt and debris all in the name of symbolic gestures.