If I Were Alan Kyeremanten…. 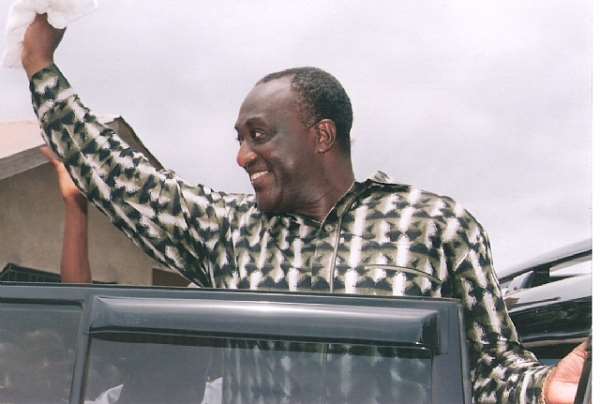 It was expected by many, both within the NPP and outside the NPP, that Alan Kyeremanten would contest the presidential primaries of the largest opposition in the country. Never mind the fact that he lost the last two presidential primaries to the most popular candidate in the NPP at the moment, Nana Addo Dankwa Akufo-Addo; and never mind the fact that his margin of loss has diminished from some 32% in 2007 to 19% in 2010.

It is also expected that Alan would lose the presidential primaries and this time his loss would be less than 10%, if we were to take into consideration the difference between his last two losses. But what do you expect Alan to do? Not contest and simply watch Akufo-Addo lead the Party? And then what happens to Alan's political future in Ghana? Alan had to declare his intention to contest. What does he have to lose? Nothing. Perhaps all he stands to lose is the Party's support.

The delegates of the NPP are more discerning than the ordinary Ghanaian voter and they have demonstrated this in recent times by electing the best National Executives to run their Party. I salute them for that achievement.

Firstly, many members of the NPP view Alan as the candidate who abandoned the Party at a critical time in its political quest for power – the presidential campaign in 2008. Secondly, they see Alan as a disloyal and uncommitted member of the NPP. Thirdly, they feel Alan does not have the interest of the Party at heart. Speaking to many NPP members, they indicated that Alan made it clear in April 2008 that he did not care if they (the Party members) thought he (Alan) was not loyal and committed to the Party.

These are major stumbling blocks for Alan in his bid to lead the NPP as its presidential candidate. Every political party rewards loyalty, and a conservative party like the NPP takes loyalty very seriously. The party would not put forth a candidate who is not loyal to the Party and has the effrontery to tell its members that if they want to think of him as not loyal and committed, so be it.

Unfortunately for Alan, he has done nothing to shake off this impression imbedded in the minds of NPP supporters and sympathizers. On the contrary, Alan has entrenched his disloyalty and non-commitment to the Party. He was not seen in the 2008 presidential election after he selfishly drew attention to himself by his resignation tactic.

Fast forward to 2010, he shows up again to contest the presidential primaries. By some weird consensus without any justifiable reasoning (because it was contrary to the NPP's Constitution) Alan was allowed to participate in the contest. Delegates had not forgotten Alan's selfish acts and punished him severely. Alan obtained a shameful 19% in the 2010 polls.

Again, he up and left the country in pursuit of his own dreams and career. Now, no one will hold the pursuit of one's career against them but if you wish to lead a political party to power, then you need to know how to balance your career with your politics. Alan stayed in Addis Ababa throughout the 2012 presidential election campaign, dropping in whenever it suited him, or whenever there was a major event. Alan easily earned himself the nickname “Tourist Politician” amongst most NPP supporters because they hardly saw him campaigning for the Party except on major events.

When the Party decided to go to court, Alan was nowhere to be found. Apparently, he was pursuing another dream of leading the World Trade Organization after Pascal Lamy left the Organization. Alan never supported or stepped foot in the Supreme Court for the 8 months the presidential election petition lasted. The famous Tourist Politician was seen smiling around the Supreme Court when the verdict was delivered, perhaps excited that the Petitioners had lost.

Alan would have been a sure bet to lead the NPP after Akufo-Addo if he positioned himself well. Yes, we all make mistakes but how we recover from those mistakes makes us stronger. The first thing Alan should have done after losing the trust and respect of the NPP supporters was to win it back. Obvious, right? Clearly, not for Alan.

Alan should have stayed around and remained visible in the Party rather than popping in and out like the Tourist Politician he became known as. He should have backed and supported Akufo-Addo like never before. If he had his career to focus on, then he should have focused on that.

One question the delegates are asking is this: “If WTO had appointed Alan as the Organization's leader, would he be in the country today seeking to lead the Party? Does he think we are fools and he can use us how he likes to further his ambition to be leader regardless of what leader he is?”

With Akufo-Addo's popularity, the obvious political move for Alan would have been to throw his weight completely behind the Ghanaian statesman. I was not surprised to hear that some NPP elders had impressed on Alan to do exactly that. But as always, and in the consistent character of Alan, he disregarded wise counsel from the elderly.

However, such a move, in my opinion, would have positioned Alan as the next best thing after Akufo-Addo. Oh yes, he would have replaced darling boy, Dr. Bawumia, as the obvious choice after Akufo-Addo. The same move would have solidified the unity efforts of the Party. Ghanaians would then be happy to see that the NPP is ready to lead it out of this economic mess.

Last thing, Alan and his supporters need to stop using floating voters as their basis for campaigning. I don't support NPP and NDC. I think both parties are not good enough for this country but we lack a better third political party. I hope PPP fills those shoes, and soon. I therefore consider myself a floating voter. Alan does not appeal to me, and many of my other friends, who are floating voters just like myself. He needs to work on his message because we see through him so easily.