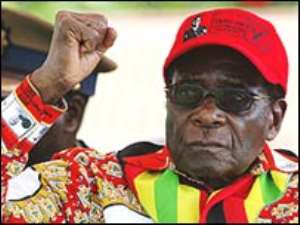 Ghana's/Africa's leaders must learn from Pres. Robert Mugabe's patriotism, intelligence, energy, effervescence (even at the admittedly unacceptably old age of 85) and courage to defending the economic self-interest of Zimbabwe. His Africanisation policy, which has attracted rounding condemnation from the western media, and even been blindfoldedly attacked by some neocolonial Africa leaders for many years, is now yielding bountiful harvests. Its economic performance indicators are rising admiringly. Zimbabwe today has the most educated workforce in Africa.

Our leaders must learn that defining an independent path of economic emancipation, like Mugabe is doing, will attract continued criticism from the west. Why? Because our national self-interest is directly opposed to theirs. The intelligent interest of a slave must contrast his/her oppressor. The west's primary interest is to exploit Africa's wealth. The core self-interest of our leadership is to defend and expand the science and technology development and modernization, and quality of life of our poorest citizens. Pragmatically, this must require defending one's national interest over others.

In Ghana today, our leaders are blatantly allowing the west to exploit and play havoc with our national commodities and key industries: gold, diamond, oil, bauxite, cocoa, Ghana Telecom/Vodaphone, Ghana Airways, GIHOC industries, etc. This is puzzlingly unintelligent and indicates the abdication of leadership duty to the Ghanaian/Africa people. Why? Because our commodity resources can run out (deplete).

This is partly because they fear attacks from the west; they are Christianised neocolonials who naively think leadership is limited by a mechanical, religious adherence to an abstract notion called, 'democracy' and 'neoliberal globalism'. This is why they have capitulated to the diktats of the IMF-SAP. Ghana's leaders are also tremulous of media attacks, and of courting unpopularity from their masters in the west. Mugabe admirable withered these very western attacks in the last two decade or so. This is what, Peter Goodwin a pro-Rhodesian supremacist, malevolently wishes to be our aging Mugabe's swansong:

"On my flights to get here, I have reread Gabriel Garcia Marquez's The Autumn of the Patriarch, and relished the scene in which sharp-beaked vultures, maddened by the stink of human carrion, tear their way through the mosquito screens of the imperial palace, alerting the citizens in the city below to the death of the dictator" (The Fear: The Last Days of Robert Mugabe, Peter Goodwin, The East African Times).

I have read Marques too. On the contrary, I interpret the vultures as a metaphor for African resistance against blatant western exploitation. The lesson Ghana/Africa leaders must draw from Goodwin's unfounded criticism is that, Mugabe does not look over his shoulders for approval from the west or east. He has continued to do what he thinks is best for Zimbabwe. Our leaders must do the same.

Our leaders must note that the west will savage any independent-minded African leader with criticism. They have hated and crucified all our most courageous, effervescent patriotic leaders who boldly defend their nation's self-interest. They hated: Dr. Kwame Nkrumah, Samora Machel, Nelson Mandela, Patrice Lumumba, Thomas Sankara and Murmur Gadaffi - although they had Sankara and Gadaffi killed, they remain everlasting heroes who are permanently etched into our nationalist, revolutionary consciousness. There is more dignity in dying for one's country than remaining a kowtowing, 'democratic,' angelic, Eurocentric, Christianised buffoon.

The British said nothing when for over 15 years he allowed them to retain the lands they stole from poor Zimbabweans. They said nothing when Britain reneged on compensating them. But immediately he started insisting on land redistribution and economic Africanisation, all hell broke loose. Their powerful media vilified him so much that initially a lot of Africans also imbibed that hatred. They personalised their hatred - as if hating him will address the major political, economic and social contradictions they also faced with their own kowtowing, IMF-SAP-pushing, neocolonial leadership.

To conclude, this is how the west now blames Africans for even their vicious, barbaric Plantation Slavery Project that has near-permanently underdeveloped Africa. Therefore, Ghana's/Africa's leaders must rediscover the earlier nationalist phase of decolonisation. I have written to help educate the African public towards the African Union for some years. 2014 should be the year to concentrate our attention to germane issues which actually edge us to actual African Unity. We must cut out all the excess internecine political infighting – fat, sinew, et al - to get to the lean meat of economic development, modernization and a sure-fired United States of Africa (USA).