Ghana Must Develop By Embracing Its Own Traditional Gods 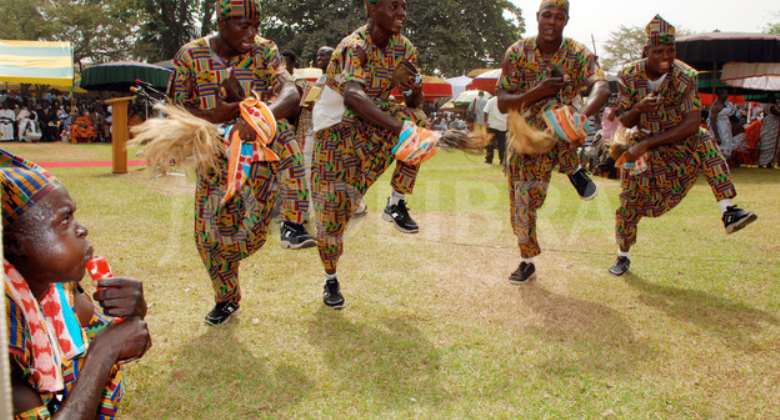 A teacher friend states on Facebook, 'My God would fetch water for me to last forever with a basket to disgrace the bucket. I'm blessed basabasa. Satan, BEWARE.!!!!!!' Expectedly she has received a deluge of dogmatic support from both affirmed Christians and Muslims. I see an ironic symbolic parallel of her basket-water metaphor with the suppression of Ghana's religions by Christianity and Islam.

I beg to disagree with her and all who sheepishly support her statement. I am not known to be afraid to walk counterclockwise to everyone on relevant issues which affect Ghana's/Africa's development. I think in the absence of Socialism and Pan-Africanism, Ghana must retain its traditional gods. I believe this will help stimulate our cultural self-confidence, independence of mind and soul, and our economic, social and political development.

As a child, my parents ensured we traveled from Accra to spend our long school vacations in Cape Coast. They were aware of the need to orient us to our traditions – to stimulate the speaking of Fantse language and bind us firmer to our extended family. I looked forward to these visits because I could play at Amanful beach, only twenty yards behind 'Yard', our family house. I also liked the many gems of cultural surprises in that community. There were spontaneous drumming and dancing whenever the Akomfo (traditional healers) danced with leaf-laid baskets that contained water. They were very adept at dramatizing their dances. The female Akomfo were my favorites. As part of their dramatic repertoire, they will contort themselves into a snake, a lion, a soldier or a Dominatrix tyrant.

In the background, there was always someone to give a running commentary to explain the religious symbolism and intentions of these brilliant, ballerina-azonto-cantata-healer-actors. Thus, the community was reinvigorated. Our sins and exertions dissipated. We were publicly propitiated. We laughed and danced alongside the Okomfo and collectively celebrated our worries away. The magic was all in the basket which leaked not.

These days, alas, our people have stopped carrying the basket that won't leak. Amanful, Ayidan, Gyegyem, Kotokoraba, etc are now unprotected spiritually. Even the 'Baka' (river) which has always been the spiritual barometer of a good agricultural harvest - a promise of a good fish catch and plentiful maize harveststhat year – has dried out. One of our key traditional gods (the other being 'Atoi') has lost its element of sustenance. Today, we only remember our gods symbolically at Afekye (festival) every July. The Akomfo only play to the very European tourists whose ancestors once enslaved our people at, Pata Kesim; only at Afehye.

The result is devastating. Cape Coast, Ghana's first administrative capital, is now a mere shadow of its past cultural and economic splendors. It is perhaps the poorest regional capital in Ghana. Reflective of this clear lose of demographic power – compared with regional capitals like Kumasi, Accra and even Sunyani - even national budgetary dole-outs for regional constructions and developments like (sport stadiums, motorways, skyline office buildings, industries, key service sectors) have all been denied her by successive central governments, PNDC, NDC, NPP, in Accra.

Even though there are Christian churches littering Cape Coast - polluting the air with 'conventions', 'all-nighters'; shrill but admittedly joyous songs and prayers to a strange, distant, ethnically estranging god - our communities are now riddled with: female pregnancies (it is common to see lactating 12 year old girls) abject poverty, ignorance and extreme unemployment.

Instead of involving our fishing communities and ever-increasing youth population in spiritually harmless, motivating socialising local religious activities, Christianity has become a stylistic way of collecting 'tithes, offerings, gifts and donations' from the poor, which are highly unlikely to be sent to 'heaven' by Western Union to the Christian 'god.' Inevitably, they are short-circuited into the pockets of our 'good' 'pastors,' 'bishops,' and Imams!

Comparatively, Indians have retained their traditional Hinduism. Like our abosum, they also worship: rivers (Ganges) the sea, trees, mountains, rock-stones, elephants, snake, and rat gods (in Ghana we eat these creature before they become gods!). But by historical accident we swallowed the white lies and shunned our gods. Result: traditional India has found its cultural self-confidence. This has propelled her to the pinnacle of space-age science and technology.

Today they even give economic and technical aid to Ghana – they employ our people through firms like: Tata, Zoomlion, and the many state industries they bought for peanuts under our clever governments' IMF-SAP-defined divestiture programme. Hinduism has contributed to Indias industrialization and technological advancement. Coversely Ghana's smart leaders (Rawlings, Kufour, Mills, Mahama) have either sold, or maintained the sale of all our gold, diamond, oil, bauxite, cocoa and key industries to western and Asian firms including India.

The irony is some of our top professionals and political leaders unashamedly practice Hinduism and its sub practices (like meditation: three paths of magas, bhaktimarga, and nanamarga; Karma sutra; vanaprastha, grastha, brahmacharga, etc). Yet puzzlingly they are ashamed and extremely hostile to exploring the philosophical underpinnings of our authentic religions. Worshiping our 'abosum' is extremely abhorrent to these hypocrites. Only Nana Kweku Bunsam self-publicises he worships abosum. He has even exposed 500 Christian 'pastors' and 'bishops' who paid to use his abosum talismans to attract more. Such is Christian hypocrisy in Ghana!

To conclude, I am agnostic. I do not believe in religions but am interested to search their cultural significances. What is germane is, that although our traditional abosum, like all religions - including, Christianity, Islam, Budhism – are mythical. They are unrealistic, spiritual bugaboo (object of fear or alarm; a bogey). But they do have some importance and relevance to our traditional cultural and economic sectors. I propose their replacement with the sustainable political ideologies, of Socialism and Pan-Africanism. Ghana needs a people-based, mobilising, motivating, science and technology-fuelled, manufacturing focused, industrialized, export based economy.

Till we get an competent, effervescent, courageous, intelligent, youthful leader which understands and will defend our national self-interest to the hilt through Socialist and Pan-Africanist philosophical and economic agenda, We must embrace our traditional religions. Indeed why force Christianity and Islam to be there when they are not there? Like India (with its thousand abosum deities as I have indicated above), Japan (with its Shintoism, Buddhism and elaborate tea rituals) our authentic religions must be allowed to coexist with Socialism and Pan-Africanism as a national ideology for modernisation and development.

Surely after all these years of Christian-Islam Muezzins noise-polluting from the Top of a Minarets, it must be clear to us all that our abject poverty, caused by our SMART leadership that has sold all our gold, diamond, oil, cocoa and key industries to the very same Europeans and Arabs who once enslaved and colonized us, has worsened under ineffective Christian and Muslim prayers to their god and prophets. They have failed us. We need our locals gods who will put the fear of god in these incompetent leaders enough to get them working. THINK!