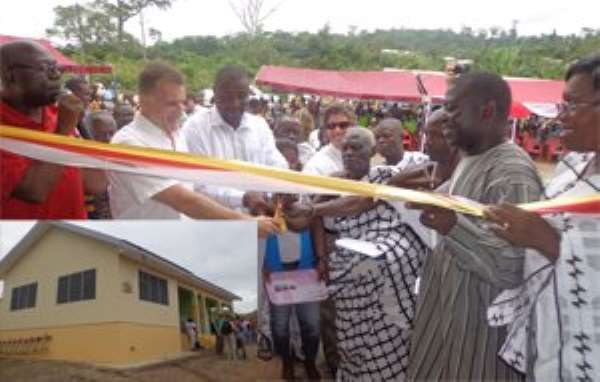 The project which would in no doubt make accessibility of proper healthcare by the predominantly farming community easier was made possible following collaboration by three health institutions.

They are the Komfo Anokye Teaching Hospital (KATH), Kwame Nkrumah University of Science and Technology -Medical School (KNUST) and the School of Public Health, University of Utah,(USA). The edifice boasts of facilities like main ward, a theatre, rooms for the resident midwife and resident medical assistant. It was constructed at the cost of GH ¢45, 000. Daniel Ansong, Senior Lecturer and Deputy Director of Research and Development Unit, KNUST, said the health facility was geared towards making access to healthcare easier for the people. Having realized the severe challenges confronting the community when it comes to health delivery, the three organizations embarked on a research study about how to help the community overcome its challenges. According to him, the intensive study by the researchers from three institutions covered areas such as agriculture, hygiene and sanitation in the predominantly farming community.

He noted the group in one of their research discovered that people were dying at an alarming rate in the community; an occurrence which they discovered was linked to non-existence of health facility in the area.

Dr Ansong said construction of the facility was to help curb the upsurge of deaths, noting that residents bearing the National Health Insurance Scheme card could have access to the newly constructed health facility.

He was speaking during a colourful ceremony at Abira where the CHIP-compound was unveiled. The historic programme was attended by people from all walks of life including traditional leaders.

Mr Rick Gaskins, the main donor of the project and leader of the Utah University Team, expressed his delight for being able to partner the district assembly, opinion leaders and other collaborators to put up the edifice.

The District Director of Health for Atwima Nwabiagya, Dr Osei Somuah underscored the importance of having CHIP-compound in a relatively deprived community.

According to him, apart from reducing deaths at Abira and the nearby communities, pregnant mothers could now access health care easily, adding that emergency services could be dealt with at the health facility.

The DCE for Atwima Nwabiagya, Nana Asare Bediako thanked the three institutions for extending such support to the Abira community, stressing that the facility would boost health delivery and better the lives of the people.

Nana Asare Bediako charged the Abira community and others who have benefitted from the benevolence of the three institutions to take charge of their numerous projects and maintain them.

Nana Yeboah Asiamah, chief of Abira commended the group for their kind gesture and appealed to the government to help refurbish some of the dilapidated basic schools in the community.

The MP for the area, Benito Owusu-Bio pledged his commitment to ensuring his constituent would get the needed access to quality health care.

According to him, 'the nation's development is pivoted around the health and strength of its citizens.'

To help sustain the activities at the CHIPS-compound in Worapong and Abira communities, the MP donated GH¢4,000 to support both hospital administrations.