'Archbishop Of Bamenda Will Kill Me Before Expelling One Mbororo From Their Land,' Prof Nche Zama, M.D; Phd Harvard 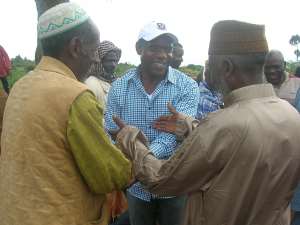 One of the top 24 heart surgeons in the United States of America, Prof Nche Zama of Area Health paid a private working visit to the Mbororo of Banja, Bamenda III Subdivision of North West Region of Cameroon on 17 May 2013 to better understand their plight, and appraise the expulsion notice of the Catholic Archbishop of Bamenda.

Prof. Nche Zama is a Humanitarian medical doctor who believes most heart problems could be prevented if the physical plight of man was addressed and resolved in time. Coming to Banja is to stop the mental and emotional torture the Mbororo have been subjected to for over four years.

He learnt of the predicament of the Mbororo of Wumse -Ndzah who were threatened with expulsion by His Grace Cornelius Fontem Esua of the Bamenda Catholic Archdiocese and some bias and interested local administrators of the North West Region. These administrators had misled Minister Jean Baptiste Baleoken, formerly of State Property and Land Tenure to sign Arête No. 000947/K.6.1/MINDAF/D1/D13 of 2 September 2011 granting 46 hectares 38 acres and 98m at Wumse Ndzah to His Grace Cornelius Fontem Esua, Archbishop of Bamenda, representing CATUC.

As the first hearing of a court matter on the advice of the Mbororo to restrain the CATUC from destroying buildings belonging to the Mbororo at Wumse-Ndzah, Barrister Gideon Nji regretted that the Catholic Archbishop applied for a land lease instead of acquiring private property.

The argument here is that the catholic University of Cameroon is a private institution and cannot pretend to be a public service hence does not qualify for a land lease on National land. Equally, the Mbororo land in question is in category one of the Cameroon National land, being occupied and developed and cannot be expropriated.

It is also important to indicate that Ardorate Mamamda of Banja is a third class chief of the Mbororo community hence the private public property of the community and by law cannot be prescribed, attached, alienated or expropriated.

After visiting the Mbororo of Mamada, Prof Nche Zama said, 'We are all Mbororo. This is not solely a Mbororo issue, it is an issue that affects humanity and human rights. Injustice against one human is an attack against all human beings.'

He praised those who have had the courage to come to the defense of the Mbororo and the lucid author of the now world renown article 'Archbishop of Bamenda Expels 300 Mbororo from their homes, Farm and Grazing Lands.'

'That article has shocked me for the last three weeks and triggered my interest to come to Cameroon and take action in association with the rights campaigners on the ground to stop the injustice against this vulnerable minority Mbororo ethnic group.' Prof Nche Zama said.

After listening to a presentation of the Mbororo issue by the rights consultant Fon Achobang, Prof Nche Zama said 'I am here to empower the Mbororo with education. Education is key and I can only stand in front of you today because of the education I received. All the young Mbororo who are willing and are qualified will be educated to the highest level of education according to their ability and wishes.'

He said he was inspired by the Late Dr. Martin Luther King to embrace civil rights and human rights. As a humanitarian medical doctor he has traveled through South America, Asia and Africa to deliver free medical care. He pledged to become a member of the Mbororo community and stand up with them to fight for their rights to life, property and decency.

'I will be offering the Catholics 25 percent of the cost of any new land they intend to purchase. But if the Catholics insist on building on the Mbororo land, they will have to kill me before expelling a single Mbororo from Banja.' Prof Nche Zama said.

Prof Nche Zama said 'life is not about money and the property we have but about the little things that we do to improve the lives of fellowman.'

Prof Nche Zama was excited when 14 year old Fadimatou Dairo said she wished to become a medical doctor. Prof Nche Zama parted her on the back and promised to take her through medical school to thunderous applause from the community.

He promised his 100 percent support to all initiatives that target wealth creation and education in the Mbororo community. Prof Nche Zama will be presenting the Mbororo problem to the highest levels of Cameroon government in the days ahead. He was also scheduled to meet His Grace Cornelius Fontem Esua, Archbishop of Bamenda.

Meanwhile it has emerged that Dr Ndi Alfred of the University of Bamenda who had applied for 45 hectares of land on the Mamada Estates never succeeded in his application. He has instead obtained 3 hectares on the Estate. He said his application for the 45 hectares earlier reported was supported by a power of attorney Ardo Adamu Bi Mamada gave him as his representative.

The Magistrate Court Bamenda has scheduled a locus for the Mamada Hills to determine its occupancy on 30 May 2013. This occupancy had earlier been settled by Ordinance No 49 of 1933, as settled by D.C.E Tovey Esq, D.O. of Bamenda Division, settling boundaries between Elachu (former name of Bandzah people or Bforchu II); Mokwene (former name of Nkwen); Mbeli (Bambili) and Bamendankwe. Similar boundary settlements by the colonial administrations have been used by the International Court of Justice in Geneva to resolve the Bakassi crisis between Cameroon and Nigeria.

Musa Ndamba, focal point of the Mbororo Social and Cultural Development Association (MBOSCUDA) asked the Mbororo community to begin planting of their crops even though belatedly as they were afraid the CATUC will come and arrest and torture them. The Archbishop of Bamenda had earlier dragged the Ardo Adamu Bi Mamada to court for trespass.

Ardo Adamu Bi Mamada was simply plowing land to plant Irish potatoes as he did every year. The Ardo alone produced 100 tons of potatoes per year. This year has suffered a serious threat to food security as the Mbororo were treated as trespassers on CATUC land and were prevented from farming their own land.

The administration of Mezam Division led by Senior Divisional Officer Felix Nguele Nguele and the Sub Divisional Officer of Bamenda III led bulldozers to the proposed resettlement site where they destroyed the houses of Bambili residents without any prior notification or court order for them to leave. The Bambili people in retaliation destroyed some 5 houses belonging to Banja people on the same piece of land they call Communal Grazing land.

Observers are wondering why the administration will lead such wanton destruction and provocation of war in a volatile region like the North West of Cameroon.