My Will To Fight Corruption Unshakable - President 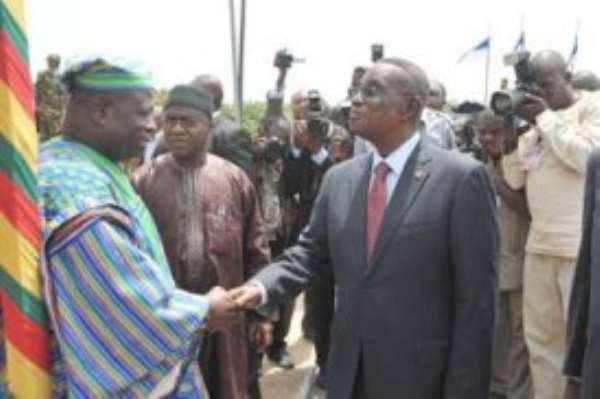 President John Evans Atta Mills says his commitment to fight corruption in all areas of society remains resolute and unshaken, even in the face of attempts to thwart his efforts by legal and technical means.

“Let me state here and now that I remain undaunted by attempts to thwart the fight against corruption by legal and technical means,” he said.

“I do not care whose ox is gored when it comes to the fight against corruption, neither will I be off-tracked by all the sideline comments that are being made to befuddle the hardcore issues,” he added.

He told parliamentarians in his State of the Nation Address in Accra Thurday that the government was making efforts to deal with cases bordering on corruption and the drug trade.

The delivery of the State of the Nation Address is a constitutional requirement. Article 67 of the Constitution requires the President, at the beginning of each session of Parliament, to deliver a message on the state of the nation.

The ceremony attracted a myriad of personalities, such as the Vice-President, Mr John Dramani Mahama; former President Jerry John Rawlings and wife Nana Konadu Agyeman Rawlings; Ministers of State, the security services, representatives of political parties, members of the Diplomatic Corps, traditional rulers and a cross-section of the public.

The President’s one-and-a-half-hour address, which was on, “Still Building A Better Ghana”, covered every area of the economy and was laced with humour and jokes, to the admiration of those present.

It was, however, not without the usual heckling from the Minority side of the House, who intermittently sang songs alluding to what has become known as “the Woyome saga”.

The President said the government had made a headway in unravelling the mystery surrounding the cocaine that disappeared from police vaults, as well as the 77 parcels of cocaine that got mysteriously missing from the MV Benjamin.

Restating his resolve to fight corruption and also make the country an unattractive destination for illicit drugs, the President disclosed that National Security had in its custody a very key player in the case of the missing 77 parcels of cocaine.

“The fate of the abortive [email protected] Commission prosecutions stayed my hand in going the route of appointing a presidential commission to reopen investigations into the disappearance of cocaine from the police vault, as well as the 77 parcels of cocaine that got mysteriously missing from the MV Benjamin,” he said.

He said he had also received a report from the Bureau of National Investigations (BNI) on the results of investigations into the cocaine which got missing from police vaults.

He gave an assurance that the truth would prevail at the end of it all, stressing, “I intend to get to the bottom of the matter, and I will!!!”

On justice delivery, President Mills said in many of the matters that reflected negatively on governance, the Judiciary, as the institution of state with the mandate to dispense justice, and the Executive, with the mandate to implement the law, must act as partners engaged in a collective effort to rid the country of corruption, drugs and other harmful activities.

He said any perception that the Judiciary was on the side of wrongdoers undermined democracy and the institutions of democracy.

The President reminded the Judiciary that it was the arm of government that had as much responsibility as the other arms of government in ridding society of criminal elements, thereby ensuring justice for the citizenry and other persons.