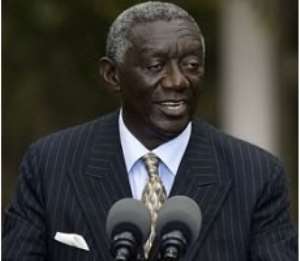 Former President John Agyekum Kufuor has explained that the refusal of some ministers under his government to appear before the Economic and Organized Crimes Office (EOCO) does not mean they have something to hide.

According to him, his government did not enter into any contract agreement with Alfred Agbesi Woyome to find money for Ghana, as it has been alleged, and for that reason, instead of appearing before EOCO in secret, he and the other names mentioned in the “Woyome issue” should be made to face a truly independent Public Commission of Enquiry and made public for all Ghanaians to know the truth.

President Kufuor was speaking in an interview with Emmanuel Chir-eebo (Kimo) on the GBC's Upper East Regional Radio, URA Radio, on his first day of a two-day visit to the region.

When asked why he has advised his ministers not to appear before EOCO he stated, “Please, again we have been misconstrued, we are demanding a transparent Public Commission, by that I mean, the President or anybody else whose name has been mentioned should be put before a Public Commission, openly, publicly so we all tell story fully".

"They said my government contracted with Woyome to find us money and I am saying my government didn't give any contract to Woyome….but if they say we gave contract to Woyome, then we are saying put Kufuor before this Commission and then quiz Kufuor for the truth to come out and I will do the same with the current government… For the President to direct that we should appear before EOCO, his creation….incidentally the law also makes EOCO answerable to the Attorney General office, but by all the accounts the office of primary suspicion is the Attorney General's office.

So why do we go before EOCO to investigate behind closed doors and at the end of the day, EOCO submits report to the Attorney General's office, the office of first suspect in this whole saga for some story to issue before a public enquiry takes place,” he said.

He assured the public that the New Patriotic Party (NPP) had nothing to hide in connection with the judgment debt scandal, rather the NPP wanted the truth about the scandal to be known by all Ghanaians, but would however be answerable only to an independent Public Commission of Enquiry and not the EOCO as President Mills has directed.

When asked whether Mr. Woyome deserved any compensation for an abrogated contract, Mr. Kufuor noted that Mr. Woyome had no right to claim any money from this government or any other government of this country. He added that Woyome had no contract with the state and further questioned why the Attorney General decided to authorize the payment of such a whopping sum of money without defending the state to the latter.

Touching on the exploration of the country's oil find, Mr. Kufuor was not happy about the management of the country's black gold though the incumbent government made Ghanaians believed that the oil was indeed going to be a blessing and not a curse.

In his view, there was very little transparency in the administration of the oil and gas sector, adding that the people of Ghana should be given the opportunity to see the insight of the state of the art project.

“Ghanaians demand more transparency in the sector and I hope Parliament will take up the responsibility of ensuring decency in the dealings of the sector,” Mr. Kufuor noted.