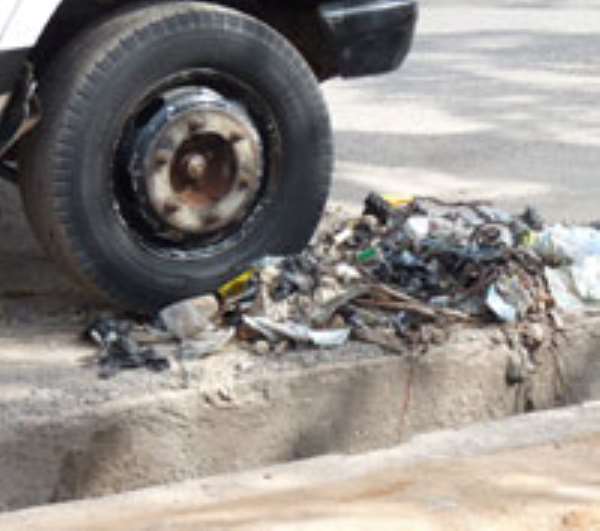 Littering the  environment is a  criminal offence punishable by law. Offenders are either given a fine or are prosecuted by the law. If that be the case, then one can emphatically say that about 90% of Ghanaians in the country fall foul of this law.

Littering on the environment, especially, throwing litter from a moving vehicle, is one of the commonest offences which most Ghanaians are liable of. The offence of littering is ignorantly over-looked by the guardians of the law, as it is not considered as serious a crime such as robbery, murder, stealing, defilement or defrauding.

Though not as serious as the above-mentioned crimes, its long term consequences have a serious effect on the environment and the lives of the people. Littering makes the environment unhygienic, resulting in contagious diseases like typhoid, which in the long run, makes the government spend more in the health sector. The most pathetic consequence of littering is the recent incidence of floods in various parts of the country. Apart from poor drainage systems being one of the main causes of flooding, littering, this time around, has been considered a cause of flooding, as it has caused most of the few existing drains in the country to become chocked. It is the responsibility of the various metropolitan assemblies or litter wardens in the country to make sure the environment is litter-free.

Littering
The term 'litter' has to do with the throwing around items such as wrappers, cans, bottles, or packaging, 'anything' includes food, as well as cigarette ends or large items such as bags of rubbish.  The act of littering has become the habit many Ghanaians, irrespective of where they find themselves. Sachet water polythenes, which are the commonest of all litter, have chocked almost every gutter in the various cities and towns in the country.

With every 50 metres of walk in some of the environs in Accra, like the Kwame Nkrumah Circle, Kaneshie and Old Fadama, one is sure of coming across a chocked gutter heaped up with filtered water, polythene bags, fruits, yoghurt, and ice cream sachets. Some people intentionally, especially those in market places or food vendoring areas, sweep their waste and litter into nearby gutters, together with gravel and sand, which results in the gutter water not running at all.

Some people, as well, take advantage over heavy rainfall and dump their waste into flowing waters, with the notion that the rain will carry them away, but end up getting chocked at a point, hence resulting in flood during heavy rainfall. For some lucky vicinities, which are fortunate to get some waste bins of ZoomLion Waste Company Limited, some residents deliberately sweep and dump their rubbish into these bins, instead of waiting for the waste truck, or even going to the main dumping site when it is full, but dump their waste around the rubbish bin, with the view that the waste truck will come for it.  During heavy rainfall, the contents of the waste bin, which is normally situated beside a gutter and surrounded by rubbish dumped there by the residents, is eventually washed into the gutter.

The pathetic aspect are people who sometimes claim to be engaging into communal labour, and do their best to take remove the rubbish from the surrounding gutters, refuse to carry them to the dumping site, resulting in the rubbish going back to the gutters again when there is heavy rainfall or a strong wind.

Littering and flood
Habitual littering, eventually, as the years goes by, has bad consequences on the health and livelihood of a nation. The frequent occurrences of floods off late has resulted in the loss of many lives and properties, as was reported by the various radio stations and newspapers that  about five people died during the last overnight torrential rains on October 26, 2011, which was a Wednesday. Two people were also confirmed dead at Asantewaa, a farming community in the East Akyem Municipality of the region, following torrential rains that hit the area last Tuesday night.

According to the report, residents fled their homes as the water levels rose, while rescue teams tried to rescue those trapped by the flood waters. Residents in some areas had to climb on to roof tops, hoping to be rescued by disaster management officers. The report further indicated that drains, streams, and rivers were overflowing, sweeping along personal properties and goods, as residents tried to scoop water from their rooms and shops in an effort to save personal belongings. Roads and bridges were as well damaged, and gullies created.

It was reported by the November 1, 20011 edition of the Daily Graphic that the toll in the Accra flood had risen to 14, while 43,087 people were said to have affected by the rains, National Disaster Management Organization (NADMO) officials indicated. According to the report, out of the 14 dead victims, eight were males, and six female. Among those affected, four sustained injuries, while the rest had their properties destroyed.

The offence of littering
It is a criminal offence to carelessly discard litter in a public open place, except where it is allowed by law, or done with the consent of the owner or occupier of the land. Throwing litter from vehicles on to public land is also a littering offence under the Environmental Protection Act. If the registration number is taken, the registered keeper's identity can be obtained from the Driver Vehicle and Licensing Authority by the police or the local authority.

Witnesses should note whether the driver or passenger threw the litter, and take a good description of the vehicle and offender, in case it is needed in evidence. Offences can be reported to the police or local authority, and they will decide whether to take further action.

Conclusion
Many people consider throwing a few pieces of litter along the side of the road as being a crime, but just an act of throwing away waste.  According to research, littered roadways, properties, and illegal dumpsites cost the Commonwealth millions of dollars each year in cleanup costs, so applies to Ghana. The government spent more money on trying to tidy up the country, instead of using it on developmental projects. The citizens of the country are always crying for jobs, but at the same time, compel the government to use its limited resources on situations which can be prevented.

It is the responsibility of the various metropolitan assemblies to make sure the law against littering is duly adhered to, so as to, not only prevent situations like epidemics, but floods especially.