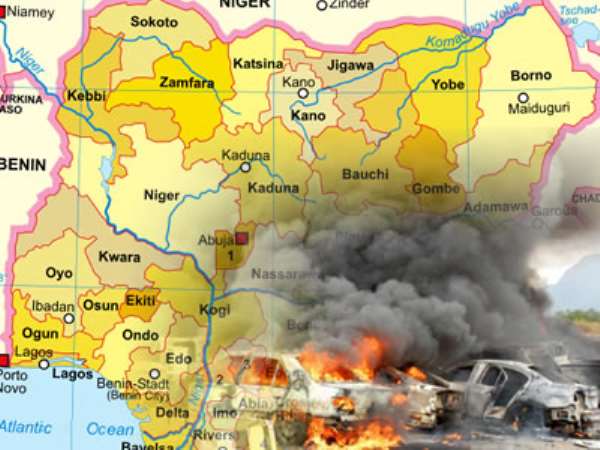 Is there a power struggle going on in the Army to kill National Conference outcome? There are potential and phantom coup d'état whenever the polity is restless in most developing countries. It will be gross malpractice if General Badeh is not prepared after calling off the bluff of retired Boko Haram General Aliyu Gusau. It is even more pertinent now since we do not know head or tail of the Generals found supplying arms and intelligence to dreadful Boko Haram for ambush.

If Ebele's National Conference fails to execute change, coup d'état will try. More want regional government right now. Some people don't realize a contradiction between National Conference agreement by mostly wanted and coups that are bound to raise ugly head in the Army by tulasi. Either of the two power plays can be used to justify the end. It depends on who gets the better grip. The consequences must satisfy majority of folks yearning for change. No going back now.

Yes, Nigerians are obsessed with Boko Haram: just sick and tired of excuses. President Jonathan cannot do this or that because of MEND, OPC, MASSOB or Boko Haram. These are past excuses that must come to pass. Violence has already grabbed the Country and it is not going to end until each region gets and defend its dwindling oil income. Nobody believes in a Unitary System just for oil income that must end one day, anyway. Obama had warned on US oil independence.

Ebele has the most important role to play. He cannot pass the buck and blame others because he wants to be elected as the next President of Nigeria. Presidency is not the most important at this stage in Nigeria, self-determination of the regions is the pressing goal. There are some good recommendations coming out of National Conference and there are some unpleasant ones like revenue allocations to each state. Attah's compromise of status quo allocation is a fantasy.

The oil producing states competing with Canada must get more of what they want. Spending it, not on individuals, must be negotiated with Federal. Restoration of the environmental disaster must be the major part of negotiation. The areas must be able to live on fishing and agriculture before oil world market dries up. Turn area to major jobs producer for Nigerians willing to work.

Nigeria cannot afford to become North and South Korea constantly at each other's throat. Ebele must deliver revenue allocation closer to what oil producing areas want than to what Boko Haram Generals want by force. The day people become rich because they are generals, militias and projects contractors that do not produce mass employment for Africans must come to an end. You cannot reward fear, idleness and corruption and expect the Country to grow.

Having accepted this, oil producing communities must realize that they have obligations to others; from their families, communities, Nigerians to fellow Africans. It does not make sense to excuses looters within that only invest little of stolen oil income in the community but squander and invest same loot in foreign lands. This is where they pay taxes on luxurious homes, cars and lose their account numbers to the banks when they die while poor communities suffer in Africa.

Actually we need renegotiation with oil companies paying little or no taxes by hiding them in their expenses. Oil producing areas in any country, must respect Federal supervisory laws against abuses, and retain the power to tax any resources on or off shore. Taxes are needed for mega infrastructure, redistribution to states according to poverty level but not allocations to king gongs, kingpins and cronies in those states as allocations of oil wells by fiat without justification.

Gen. Badeh must know, students of history learned that Tafawa Balewa got a wind of the coup in 1966; Aguyi Ironsi got a wind of the July coup since Northern soldiers were waiting for him to take action against the January coup plotters. It was no difference with Gowon's so called palace coup. But Murtala Mohammed must have been caught off guard by Dimka's coup, just as Buhari and Idiagbon. Babangida and Abacha, members of all coups, caught both by surprise.

This time there are no excuses, any coup must fail. In the first place, arms and training camps are available in the world market and every region has its Boko Haram, MEND, OPC or Biafra Zionist Movement biting it within. The second advantage is another silver lining. As much as we detest foreign intelligence on African soil, they are present in Nigeria right now with more countries like Australia offering help. But only President Ebele can act on Gen. Badeh's advice. Coup plotters will be playing a different game this time if they try and must certainly fail.

The military now understand that they cannot wrestle any of the militias to submission without prolong casualties on each side. Indeed, we have to accept the fact that the Armed Forces have been invaded by different militias. During the time of Yar'Adua, the governors were accused of sponsoring MENDS and now President Jonathan, a former Governor, claimed his Government has been infiltrated. Well, they were already there before he got into Federal Government.

Coup plotters must be put on the spot because they are clueless after taking power. They lack the expertise and planning needed to move the Country forward. Their local academicians and international contractors work to the whims and caprices of these armed robbers leaving their communities dry and backward. The only way forward is regional competition amongst states from the community to the national level. Cooperating regions can establish mega projects.

Nigeria has reached a point of no return. Nobody can coerce the polity into one basket so that they can easily drain its oil income. Moreover, the people have come to realize that individual looters from poor and rich states have spent very little on whose causes they howl; to alleviate their suffering leaving the people no better off than they were before Independence. The harsh reality is that military governments as armed robbers are no better than civilian governments.

COVID-19 Vaccine is our salvation — UGMC CEO
26 minutes ago

Stop spreading fear and panic about COVID-19 vaccination — A...
26 minutes ago