Sex Scandals In The Church 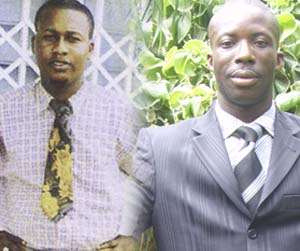 It seems that a month does not pass without a news item on a self-styled 'man of God' getting involved in a sexual escapade with a female member of his church.

These scandals have raised several concerns in our society and have the public wondering if church members know what is going on or perhaps are ignorant of the prevailing situation, as one scandal follows the other.

Pastors who engage in this activity convince their victims through false prophecy.

One infamous victim testimony went as follows: 'Pastor Addy came to my house, asked me to pray with him and that he had some bad revelations about me. While we were praying, he undressed me and started licking my vagina.'

Evangelist Okpala Ogugua was arrested for inflicting multiples wounds on his victim with a broken bottle
These are the words of a 32-year-old woman who alleged that she was sexually assaulted by a pastor at Omanjor near Sowutuom, a suburb of Accra.

Other abusive pastors who are not considered good at prophesying or perhaps don't have a permanent church go for other alternatives.

Another victim testified about her experience, saying: 'He hired me for a short time at a cost of GH¢10. I told him to pay additional money before I would allow him [to continue].

In the process of our struggle, he attempted to stab me.'

The 19-year-old commercial sex worker was nearly stabbed with a broken bottle by a self-styled evangelist client in their hotel room.

These kinds of situations are becoming more frequent and alarming, and are dragging the name of true men of God in the mud, and tarnishing the word of God.

Speaking on the issue, the chairman of the Christian Council, Most Rev. Prof. Emmanuel Asante, expressed worry over the issue of people being referred to as 'men of God' when they do not qualify for that title.

'I believe that in our days, when we say man of God, we use it loosely to refer to somebody who calls himself a pastor or an evangelist; so a man of God, in that sense to most people, is anybody who carries the bible and is preaching the word,' he said.

The Director of the Methodist Development and Relief Service, Rev Kofi Asare Bediako, also expressed worry over the upsurge in these sex scandals, saying that 'it is regrettable that such things are going on'.

Evangelist Akwasi Oppong was allegedly caught red-handed by a policeman trying to rape a victim
He added that the problem with most church members is that they no longer depend on God for interventions in their problems, but rather, 'Members have become miracle crazed and instead of them waiting on God to intervene in their problems, they run up to their pastors to seek immediate help.'

This was confirmed in a particular case described by an Agogo District Police Commander, Ekow Yawson, who said, 'The complainant heard the prophet preaching on radio where he said he had powers to solve problems faced by people; so those in tribulations should come to him for help.'

'The lady then visited the pastor for the prayers and was later invited to his home for further prayers. When she reached his house, the pastor then invited her into his room where he is said to have touched the woman's breasts and forced her into having sex,' Mr. Yawson observed.

Rev. Asare further stated that most people, because of the situation they are in, do not realise that counseling should be done in the office of the pastors.

'Christianity is dependant on God and church members should put on their thinking caps when such invitations to hotels by pastors are extended,' Asare noted.

He was however quick to note that the problem is societal, and that members should see pastors as humans just like themselves and are 'thus bound to fall at a point in time.'

In another interview with Rev. Atta Aggrey, a Senior Associate Pastor of Royalhouse Chapel, he lauded the media for bringing such issues to the limelight as these things have been happening since time immemorial.

Prophet Nana Yirenkyi is serving a 10-year jail term for defiling his 10-year-old daughter
'The extent to which the media is searching for information and broadcasting, it is why it is coming out so loudly but it is something that has been in existence for long,' he explained.

He added that the Bible has already sounded this warning that in these last days the enemy will intensify his activities, 'His agents will now move into certain areas that if we do not stand well the many good things we have built over the years will be shattered within days.'

He however noted that pastors, especially the young ones who desire to get into the ministry, should first seek God and find out what the Bible expects of them.

POTENTIAL CAUSES
Most Rev. Prof. Emmanuel Asante said in a country where there is freedom of expression and association, one cannot put a finger on the main causes of indecent acts by some pastors.

He was however quick to note that 'Ghanaians are gullible when it comes to religious matters.  We are hesitant to confront people who claim to be 'men of God'. They use this as an advantage and exploit people's situation and problems when they go for help'.

'This is why I believe that we need to educate people to understand that in spite of their problems, they should take your sense along,' he added.

He further stated that there are some tempters who are also being used as tools of the enemy to destroy the work of God.

Asante added, 'That is why we pray to the lord that He will not lead us into temptation. If you leave yourself unguarded, you will be tempted and you will disgrace yourself, your church, your Lord and your family.'

He noted that if one calls himself a man of God, then he bears the name of the Lord and must therefore seek to honor the Lord in the way he conducts his life.

He further stressed that the religious world is a dangerous world because a lot of people are using the word of God for their own ends.

'That is why it is important for the true men and women of God to teach and open the minds and eyes of their people by emphasizing the word of God,' the Most Rev. said.

INTERVENTIONS
In response to the alarming rate of incidences, government released a statement on 2nd June, instructing the police to, as a matter of urgency, set up special desks to deal with the alarming reports of sexual misconduct perpetrated by pastors.

The government further asked the Media Commission and the Ghana Journalists Association (GJA) to agree on guidelines for religious broadcasts in a bid to end the exploitation and misdirection of those who seek help from the pastors.

Government's action to deal with pastors who take undue advantage of their members has also received approval from the Christian Council of Ghana and other media organizations.

Most Rev. Prof. Emmanuel Asante also emphasized the need for laws to be enforced when people commit such criminal offences.

He elaborates, 'If somebody rapes a woman or sexually assaults her, it is a criminal offence and the law enforcement agencies must deal with that person.'

Also, the General Secretary of the council, Rev. Fred Deegbe, in an interview with a radio station in Accra, said the council will disown any pastor who is found culpable.

'The actions of these pastors are crimes against the state and the state should deal with them according to the laws,' Rev. Deegbe emphasized.

Most Rev. Prof. Asante expressed concern over the conduct of self-styled men of God who do not belong to any Christian organization.

'Members of the council will be dealt with if they flout its constitution, but if the culprit does not belong to any Christian organization, who disciplines them?' Asante quizzed.

He stressed that it is important for the legislature to come up with a law that will mandate pastors to belong to a Christian body which is registered with a code of conduct.

'When such a thing is put in our hands, we will be strengthened to deal with perpetuators,' he said.

Mr. Asante, who doubles as the Presiding Bishop of the Methodist Church, also noted that within the Methodist church, one has to undergo thorough interviews, even after extensive theological training, before being ordained as a minister.

A church auditorium
'But because we are living in a nation where there is freedom of expression and association, we cannot stop people who legally acquire a property and use it as a church or start what they now call 'ministry'.  We are not in the position to stop that person,' he noted.

The Director of the Methodist Development and Relief Service, Rev. Kofi Asare Bediako, also entreated church members to put on their thinking caps when they encounter such problems with their pastors.

'It is high time members are taught to have a personal relationship with God instead of expecting everything to be done by the church leaders,' Reverend Bediako stated.

Rev. Atta Aggrey, Senior Associate Pastors of Royalhouse Chapel, also admonished pastors to imitate Christ and learn from Christian leaders who have passed the test of time in their calling as men of God.

He however appealed to his fellow men in the clergy to always be alert since the enemy is seeking the people of God to devour.

He stressed the need to monitor these incidents and preempt them before they take place.

'I think it is becoming clearer for people to know that these teachings we have been hammering on are the areas they need to be watchful and mindful of,' Rev Aggrey said.

‘I didn’t snatch Speaker’s seat; I was only preserving it fo...
3 minutes ago