The act of spitting indiscriminately 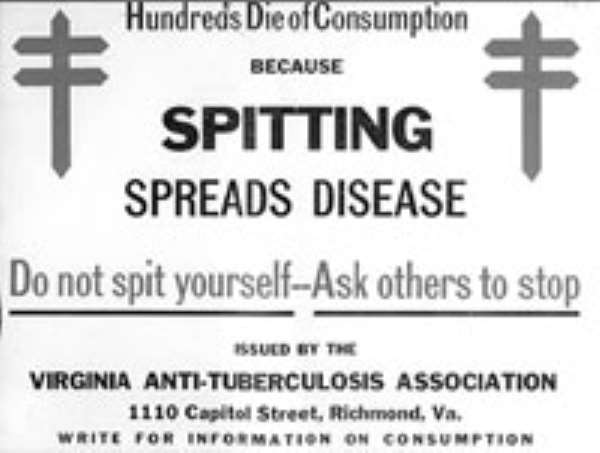 The habit of spitting on the ground has been a worldwide phenomenon for ages. People of all walks of life have a reason for doing that, even though it might not be the habit of all. No one can be exempted from this kind of habit, as both the young and old fall prey to it. For many nations, cultures and religion, spitting besides someone is a sign of insult, disgust or disrespect for the fellow.

Many people in different parts of world sometimes complain of being insulted by racists they come across, through the act of spitting. For some too, spitting beside a fellow is an implication that he or she is not scared of the one in question, or what he/she can do. Sometimes sportsmen, especially, those who jog in the mornings, spit a lot due to exhaustion.

If these reasons be put aside, what will then be the reason for the indiscriminate spitting society is facing today. Ghana is no exception, as children as young as four years have cultivated this habit, with the help of their parents or guardians.

Ghanaians and spitting
In Ghana, spitting is a daily activity by most of the population, irrespective of where they find themselves. No day passes by without coming across about six people spitting into a gutter or right in front of other people. What baffles the mind is that even in the market places, which people count on for their daily meals, people do not care, but spit when or wherever they find themselves.

It has become a normal phenomenon to see a food vendor spit right beside where she is selling, and as if that is not enough, even those who come to buy from the vendor sometimes spit there, forgetting that the food they are buying is in its final stage, and can easily be infected with any communicable disease.

The irritating aspect is that some do not only spit saliva, but phlegm, coupled with the noise they make, and also spitting on walls. Having no remorse, they sometimes render no apology when the saliva accidentally touches people nearby.

The habit of spitting has been cultivated to the extent that some people spit through the windows of buses and taxis, with the explanation that they cannot keep it in their mouth when it accumulates, lest their mouth smells, and also, according to them, they find it disgusting to swallow saliva, especially when the environment stinks.

Indiscriminate spitting can also be attributed to the numerous people who still use the old fashioned way to brush their teeth. Many people in Ghana practice the act of chewing sticks as a way of brushing their teeth, instead of using toothpaste and a toothbrush.

Using a chewing stick in brushing the teeth, results in the user spitting more saliva on the ground than usual. This act is common among traders and market women who have no toothpaste or have no time to spare to brush their teeth, since the stick can be used, even when one is attending to his or her duties, or while walking on the street.

Consequence of indiscriminate spitting
Indiscriminate spitting on the ground is not only a signs of lack of courtesy, but also destroys the beauty of walls, and contributes to the spreading all kinds of diseases. According to medical experts, when a tuberculosis patient spits on the ground and it dries up, the wind spreads the bacteria in the air.

TB is spread the way other airborne illnesses are – through coughing, spitting and sneezing. The germs can float in the air for several hours, depending on the environment. People who breathe the air containing these TB germs can become infected.

According to the Canadian Center for Occupational Health and Safety (CCOHS), an important source of respiratory disease like TB spread is by spittle. The bacteria in saliva encrust themselves as spores and survive the heat of the street. Mixed with dirt, they begin spreading through the air waiting for someone to infect, and diseases transmitted this way spread very quickly. This is the main reason why spitting is considered an ultimate despicable act.

Moreover, the saliva of people with hepatitis B can contain the hepatitis B virus, but in very low concentrations, compared with blood. Injections of infected saliva can transmit the virus; this means that when one gets in contact with saliva of a patient of hepatitis B, especially, those who spit through the windows of buses, the disease can be transferred.

It was reported by the Ghana News Agency (GNA), in the late part of 2009 that the Greater Accra Regional Health Directorate had for the first half of the year, recorded 1,322 cases of Tuberculosis (TB), as against 1,675 cases recorded for the same period the previous year. In 2008, the region recorded a total of 2,513 TB cases, with the Accra metro and Maamobi in particular, being the most endemic. The Regional TB Coordinator, Dorothy Abudey, said though there was a sign of a decline in the cases, when comparing the first two halves of the last year and this year,

Conclusion
Saving the environment does not only mean sweeping and burning of rubbish, but also learning to prevent the cultivation of certain habits that would make the environment unpleasant. It will help if the habit of indiscriminate spitting is controlled or prevented in the community. If the act is controlled, it would as well help to control the spread of TB and hepatitis B.