What is in for unemployment, robbery and waste management this year? 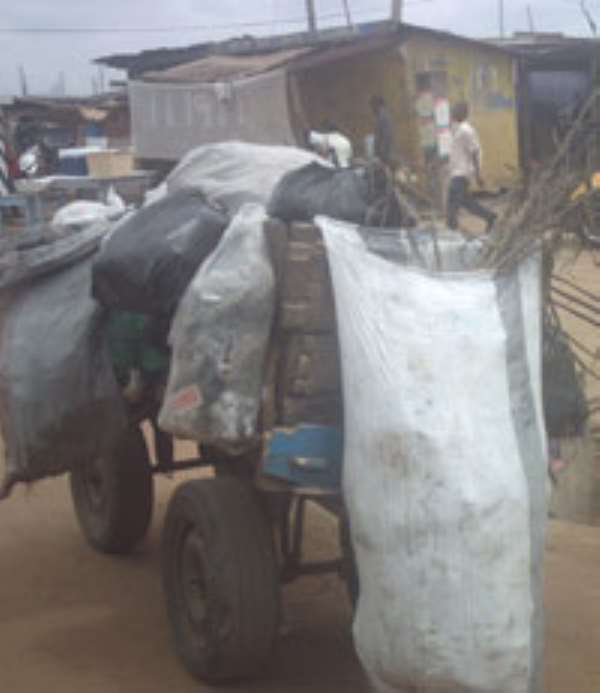 As the years go by, the social and economic problems in the country go unsolved, but tend to increase geometrically. Ghana, even though enjoys freedom and peace due to its democratic dispensation, still faces problems which hinder the progress of the nation towards development.

Despite the numerous strategies and polices embarked upon by the government to eradicate these problems, they seem not to be going away.

It is pity that a nation with rich mineral resources still finds many of it youth unemployed, and apart from unemployment, the issue of robbery and poor waste management also maims government's efforts to scale up programmes for these youth.

It is 2011, and these problems are still pending in the country, the questions is how prepared are the people and the government in solving these problems. Are these problems still going to linger around for the next government to come and make more promises, which no one knows when they will come to pass?

Unemployment in Ghana
There are active and able-bodied persons in Ghana to keep the economy strong when jobs are created for them. Unemployment has eventually taken control of the lives of people, as it is the problem causing a decline in the progress of the economy of the people, and the country as a whole.

Unemployment is a big issue most people in Ghana face every now and then, however, the most pathetic of those involved are the unemployed graduates. Most of the youth in the country, in order to make it in life, tend to further their education as far as they can. It is a new year once again, and as the routine goes, many youth have graduated from tertiary education, and at the same time, many youth are enrolling into tertiary education.

Due to this situation, many governments always add to their agenda of creating jobs for the masses, but it is unfortunate that the agenda and paperwork of the government never comes to pass.  After long years of education, and dedicating a year to serving the country through the National Service Scheme, graduates still end up not finding jobs. The lucky ones sometimes get jobs which are way below their qualifications, and paid even below the normal minimum wage. The unfortunate ones get stuck at home, with no choice, and tend to engage in all kinds of menial jobs. What then is the essence of education, if it is not meant to be the key to one's prospects in life?

Unemployment leads to a decline in the standard of living of a country's citizens. People will not be able to meet their financial and economic needs. Homelessness can set in, as people will find it difficult to rent houses. No wonder many youth in the country tend to settle with their fellow youth in just one tiny room. Unemployment, apart from resulting in social vices such as armed robbery, prostitution, internet fraud, child labour and trafficking, it psychologically takes control of the individual. The individual has to go through the trauma of not being employed after school graduation, or being sacked from work, all in the name of restructuring and reshuffling, surely, it will lead to mental stress.

Waste management
Waste disposal in the county has been tackled by governments and private agencies, but both have not been able to eradicate completely the problem of bad waste disposal, due to the climbing increase in the population, frequent migration of people into the capital, and the frequent establishment of various businesses. According to research, the population of Accra is approximately 1.9 million inhabitants, and has been growing at a high annual rate of 4% since 1984.

Bad waste disposal, including solid waste, has made it very impossible for the country to have a stinking and disease-free environment. Apart from people littering indiscriminately, they as well go about defecating in the same manner. Indeed, there are limited public dumping sites and toilet facilities in the country, but one can find ways and means of disposing of rubbish and solid waste properly, and should not always wait for the government to bring everything to them at their doorsteps.

Instead of many households, without access to waste management services like Zoomlion Waste Company Ghana Limited, dumping their rubbish and solid waste on the streets, the society in which they live in can come out with projects which will help them build these important facilities, rather than they always waiting on the government. Waste management is a very serious problem, which the country is finding very difficult to solve, despite the emergence of various waste management companies. Going through the various communities like Lapaz, Kwame Nkrumah Circle, Kaneshie, Achimota makes it evident that indeed, Ghana is a den of waste.

The intensity of waste created in a day has made the work of Zoomlion very invisible as the more they take away these rubbish the more people accumulates them. According to Zoomlion Ghana Limited as part of its effort to provide door to door services in all 11 sub metros in Accra, has now been allocated with three sub metros comprising Ayawaso West, Ayawaso Central and Ablekuma Central sub metros, but all to no avail in waste management in the country.

Robbery
Incidents of armed robbery in the country are on the increase everyday, with the youth, who are the future leaders of the country, beginning to shun their responsibilities. It has become almost a weekly ritual for either robbery incidents to occur, or a robber gunned down or lynched by a mob. Is Ghana, which is well recognised, in terms of its hospitality and safe social atmosphere, gradually turning into a den of armed robbers, where no one can be fully guaranteed his or her safety?  The frequent occurrence of robbery in the country is slowly overshadowing the hard-earned democracy the nation has worked for.

As the country is graced in so many aspects by developed countries and foreign investors due to its democratic rule, it would not be fair on the economy, and the living standards of the people, if armed robbery is allowed to run riot. If the up and coming youth are educated, then they will be able to fit into the employment sector, which might lead to the combating of armed robbery.

The occurrence of armed robbery, for many citizens, mostly occurs when people are fast asleep in the middle of the night, and even that not always at gunpoint, but they quietly sneak their way through the house in question, and steal appliances while the household is fast asleep. Things seem to have changed now, as armed robbery is being undertaken in broad daylight, or in the early evenings when the household is not yet gone to bed.

Robbery is common these days, and in many forms such as the snatching ladies handbags, wallets, briefcases, and mobile phones. Robbers go to the extent of attacking banks and offices at gunpoint, and sometimes end up taking people's lives. As if that is not enough, the citizens even don't feel safe enough when travelling, as it has become a recent tactic of armed robbers to block roads, hijack buses and rob the passengers on board. In the mid part of 2010, it was reported by one of the FM stations that a white man was followed from the airport by robbers, and robbed of an amount of $5,000. According to the white man, the money was meant for a poor family he met during his last visit.

On another occasion, a man was as well followed by robbers in police uniforms from the airport to his residence, where they ordered the man to bring his possessions, other than that they would charge him with possession of narcotic drungs, which they planted on him. If this is what the nation is turning into, then the image of the country is gradually being soiled.

Conclusion
Surely, these problems are not the only ones hindering the development of the country, but can be termed the visible ones. As the year has begun, it will be wise for the government to speed up its documented process in eradicating these problems. It should bear in mind that the more the problem is allowed to linger, the stronger its roots become.

The people must also bear in mind that the government cannot put the troubles of every society or individual on its shoulder, and giving a helping hand in the eradication of these societal problems does not help the government only, but also the individual.