Tree cutting and effects on the economy 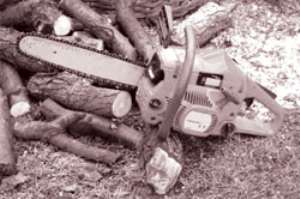 'When the last tree dies, the last man dies.' This saying is one of the commonest in the Ghanaian society, however, its meaning is rarely put into consideration. Trees can be termed one of the life dependants of man, and without trees it is doubtful that man will be able to survive even for a second on the environment.

Trees do not only provide food for man, but as well serve as medicine to treat all kinds of diseases. Trees have gone a long way in helping to save the existing problems of climate change in the world.

They serve many purposes in the life of man, but yet still, men don't think twice when reducing the life span of these trees.

One may ask why trees, which are very important for the survival of man, are always cut down by man. Whereas some of trees are cut down for important purposes, others are cut down just for cutting sake, or the reason behind it being very flimsy.

Everyday a tree is cut down in any part of the world, including Ghana, according to Robin Lumsden, a bee farmer, resulting in Africa now becoming a leader in deforestation.

He said almost one per cent of African forests are cleared each year. From 2000 to 2005, Africa lost 10 million acres a year, up from 9 million a decade earlier.

The importance of the existence of trees on the environment seems to be conflicting with the daily uses of trees by man, that is to say, in as much as the existence of trees on the environment is importance for climate change, for food, medicine, job creation, and many other things by man, it is as well important for them to cut down these trees for infrastructure, and also for export to gain revenue for the country.

It is very sad to hear of someone cutting down trees because the leaves it sheds gives lot of work, as they have to be swept up every day, ignoring the fact that the same tree gives shade for shelter from the scorching sun during the hot dry seasons.

Not long ago, trees at the central part of Accra and alongside the Accra-Tema motorway were cut down for reasons known only to the perpetrators. Some drivers complained that the presence of the trees in between the roads of the highways help reduce motor accidents.

Trees and the rapid increase of the population
Trees are very important in every way. The use of trees by man has been since the beginning of creation, however the reduction in the size of the forests and the number of trees on the environment was not as rapid as it is now.

Trees have always been the source of food, medicine, firewood, and also for building. In spite of all these activities that man used tree for in the olden days, there were still trees in abundance. However, things seem to have changed now.

The frequent reduction of trees in the forest zones, and on the environment, can be attributed to the frequent increase in the population size, modernity, technology and even poverty.

The poverty level of the country, and the government being in dire need of infrastructure for the people, makes it turn a blind eye and a deaf ear to the consequences of cutting down trees in the country.

According to research, deforestation accounts for 20 per cent of man-made greenhouse gas emissions, second to fossil fuel emissions from electricity and heat, and together, they contribute to global warming.

Moreover, during the climate conference at Bali in Indonesia, it was warned, by about 300 scientists, conservation groups, religious leaders and others, that “If we lose forests, we lose the fight against climate change.”

Trees are of importance to the environment. According to research, although tropical rain forests now occupy less than 6 per cent of the land surface of the earth, they probable sustain more than half of the biological species on the planet.

Trees and mining
Indeed poverty and the governments' desires to create jobs and infrastructure for the people, always compels governments to take decisions, which in the long run, do more harm than good.

Mining activities have been in existence in the country since time immemorial, but has never posed any immense threat to agriculture, nevertheless the emergence of more mining companies seem to pose a threat, not only to a section of the economy, but most especially, to agriculture. Mining activities have brought about the destruction of a lot farms, especially that of cocoa, in the country.

It has destroyed, and is on the verge of destroying more farms in the country. Many cocoa and fruit farmers in the mining areas have complained that the activities of the mining companies are almost on the verge of destroying their livelihoods, as they will not only lose their farms, but are denied the compensation they deserve to sustain their livelihoods.

The activities of mining companies do not only reduce the number of trees in the country, but as well, increase the poverty level of affected people, create unemployment, and reduce the Gross Domestic Product (GDP).

It is pathetic to note that the government is giving up the 60% agriculture contribution to GDP, for the 5% contribution of mining. The government seems to forget that deforestation, which causes desertification, does not only affect the climate, but also leads to drought, famine, and starvation, like what is being experienced in some countries like Niger in Africa.

Conclusion
Man cannot live without trees, because trees seem to have all the solutions to the problems of man, due to its diversity of use. However, the importance of trees is being underestimated nowadays, due to modernity and technology.

With the level at which the forest area and the environment of the country is being depleted, Ghana might not be able to win the war being waged against the effects of climate change in the country.

The country also stands the risk of starvation, drought, and great unemployment in the future, as the consequences of cutting down of trees is evident. It is the responsibility of the government to make good decisions which will be of permanent benefits to the nation, and not temporary. The citizens also ought to think about their future, and the future of their generation to come, and avoid the practice of cutting down trees.