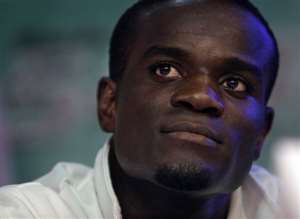 The days when boxing was used to assert national superiority are well and truly over. The earlier Ghanaians accept this fact, the better.

Years ago, Azumah Nelson fought as much for himself as he did for the nation. Anytime he jumped the ropes to enter the ring, he did so not just for personal glory. And it wasn't just for the money.

For Azumah, it was a matter of national honour. It was also about the millions of Ghanaians who had stayed up all night to watch him in action. He loved us and we loved him back.

That was long ago and there will never be another like Azumah Nelson.

Ike Quartey never matched up to him. Marvelous Nana Yaw Konadu did not even come close. And Joshua Clottey cannot even try.

When Clottey agreed to fight Manny Pacquaio, he knew there was no way he was going to beat the Filipino, who is reputed to be the best boxer in the world today. Clottey was just too happy to go in there and make three million dollars. That's all. For him, going to America must have been nothing more than a paid vacation.

Standing toe-to-toe with Pacquaio in the ring on Sunday morning, he thought very little about the millions of Ghanaians who had stayed awake to watch the bout. He thought even less about national pride.

Much of his thoughts must have been on the money he had earned and how he didn't want to use any of it on medical bills occasioned by the Packman's hefty punches. He could as well have asked to be allowed to wear a helmet into the ring and he would have saved us all the embarrassment of watching him use his arms to guard his precious head all throughout the bout.

Judging by the way he held his arms close to his head to block Pacquiao's punches and his refusal to throw any significant punches of his own, it is clear that Clottey was in no mood to fight. From the way he fought (or pretended to be fighting) most Ghanaians agree that he deserved to lose. Many are angry with him for the cowardice he displayed in the ring.

“We're losing every damn round,” the coach said as he encouraged Clottey to go out there and box. Yet, Clottey refused to throw punches. “Take chances baby. If you don't take chances, you are going home lost.”

“Pacquiao has made by far the greatest pay day Clottey ever had or Clottey will have,” one of the match commentators said.

So he had no incentive to take risks. Why take risks when you are earning three million dollars in less than an hour?

And refusing to take chances meant, national pride was the last thing on Clottey's mind. Most of us understand that he had to do what he had to do to earn three million dollars. And frankly, some of us are jealous that Clottey had such a good day in the office on Sunday morning.

What we don't get (and will not accept) is his decision to rub it in by telling us cock and bull stories to excuse his cowardice. In particular, he should come up with a better excuse other than that silly story about the banku and okro meal he had and how he suffered a bout of diarrhoea because there was too much 'kanwe' (saltpetre) in the okro soup.

If he's smart enough to put up such a pretense and earn three million dollars, Joshua Clottey must have the brains to come up with a more plausible explanation for embarrassing us all and wasting our time.

How about just coming out to tell us plainly that he was in no mood for fight and he was just content with the money? We will understand, won't we? We don't even need an apology from him. Who says sorry for legitimately earning three million dollars?

The least Clottey can do for us is to shut up and enjoy his money. If he's wise, he would donate a few thousands to some charity project. He could even write a book titled 'Pretending to be fighting', and we will love to read it.