Techiman vrs Asanteman: No one wins 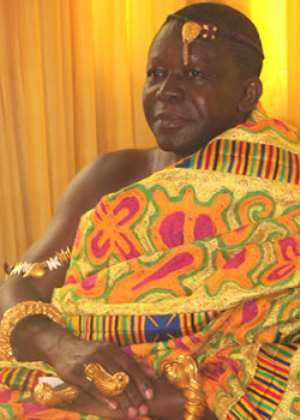 A monarch's intemperate response to a senseless crime has raised tensions between two ancient tribes to a boiling point – for the first time in more than a hundred years. For decades the people of the Ashanti and Techiman kingdoms lived their lives without thinking much about what the other was doing. Even in the worst of times, they tolerated each other until the chief of Techiman decided to take matters into his own hands.

When the chief of Techiman ordered the kidnapping (some called it the arrest) of the chief of the smaller town of Tuobodom, he must have thought that he was flaunting his power and helping bring a man he considers a criminal to justice.

But he seemed to have committed a grievous diplomatic faux pas.

Even in primitive African diplomacy, when the leader of one tribe orders the seizure of the leader of another tribe, it marks a very resounding declaration of war. And when a chief many expect to know better and be a little measured throws caution to the wind and decides to beat the war drums in return, the battle is all but joined.

The result is what we are seeing in Kumasi and Techiman.

At this stage it's safe to say that there is war between Ashanti and Techiman. Young people in the capital of Ashanti (Kumasi) and their counterparts in Techiman have been visiting mayhem on innocent people (mostly bus drivers driving to the opposing town) after the Asantehene, rather unwisely threatened to get the Techiman chief kidnapped in retaliation for the arrest (or kidnapping) of the chief of Tuobodom.

Why would the Asantehene jump into a fray between the chiefs of two neighbouring towns?

Tuobodom, apparently, is an Ashanti protectorate. It is the Tuobodom chief's insistence that he owes allegiance to the Asantehene that ticked off the Techiman chief and prompted the seizure and subsequent handing over to the police. The Tuobodom chief had reportedly refused to respond to summons to appear before the Techiman chief to respond to allegations that he had been involved in an attempt to murder, insisting that he only responds to summons from the Asantehene.

That is the genesis of all the escalating madness.
If the security agencies had acted with a little more common sense, a speck of foresight and some dispatch after the kidnapping of the Tuobodom chief, the Asantehene wouldn't have been so angered to engage in the sort of loose talk you wouldn't even expect from a loose cannon like Tony Aidoo.

In fact, it's the Asantehene's remarks which have escalated the situation to the point of violence. It's a great disappointment and a serious let-down from a chief many Ghanaians hold up as a good example of how a modern traditional ruler should behave.

The arrest of the Tuobodom chief was a serious provocation. No doubt about that. But threatening to retaliate in kind is not what right-thinking members of our society expect from a chief who is brokering peace between feuding royals from a different tribe. In other words, the Asantehene cannot ask the Abudus and Andanis to smoke the peace pipe whilst he beats the war drums against Techiman.

If any ordinary citizen had uttered the words the Asantehene spoke, he would have been arrested – at the very least for causing fear and alarm. But it's only in moments like these that we are reminded that we are not all as equal before the law as we are often told. Some people – like the Asantehene – are above the law.

The Asantehene might escape the long arm of the law but he can't escape his conscience, which must be pricking him by now. That's why we are hearing today that “he's let down his guard”, according to the Ashanti Regional Police Commander. But that's not enough. The Asantehene must take active steps and speak new words to calm tempers. Speaking through an emissary won't do. He must say the words himself.

And while he is at it, he would be doing us all a world of good if he realizes that his Asante tribe is part of a sovereign state called Ghana. Some of us are very keen on building a prosperous nation in which our diverse, ancient tribes work together to form a beautiful, tightly-knit tapestry of a modern, progressive nation.

This is the 21st Century. Chiefs cannot declare war on each other. If a minor (almost insignificant) chief provokes a more powerful and respectable chief, we expect the man with more clout to exercise greater restraint. We trusted the Asantehene to know better. But we were wrong. If he wants to return to the ways of his ancient forebears, he should take his Asante tribe somewhere and leave us alone to build our nation.

A/R: One dead, six arrested after clash over land at Adum Af...
6 hours ago

You are going to IMF because of the way you mismanaged covid...
6 hours ago