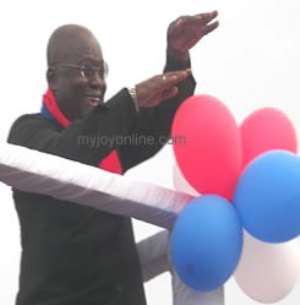 Though just a few months into the administration of the NDC, thousands of Ghanaians including myself have our hearts filled with total regret for having given Professor Mills and the NDC the opportunity to mess and destroy the destiny of Ghana our motherland. The lessons of history should have been our guiding principle in determining who should lead us but unfortunately this was not the case. Now it is time again for Ghanaians to journey through the path of serious economic difficulty, with the NDC government acting virtually unconcerned about our plight. The early signals are clear. There is no light at the end of the tunnel!

A multitude of Ghanaian youth including myself who invariably see Nana Akufo-Addo as a mentor and role model in life could not wait but stay patient to hear him break his long silence. After five solid months of staying quite, Nana finally spoke to the issues on Tuesday may 26th at the Osu Presbyterian hall. As result of which severe shivers have already started running down the spines of the NDC with looming confusion hitting the various sects of the NDC.

The import of Nana's speech was clear, vivid and without any malice of a sort. All the issues raised therein are true, real and reflect the exact situation on the ground. The NDC should better pick up the challenge of confronting these problems with the aim of finding practical solutions to them and stop their inferior communist and populist tactics of bad mouthing Nana for doing what a senior statesman should have done.

As a matter of fact, I am personally of the view that Nana Addo's press conference was even long overdue. The NPP since the aftermath of the 2008 general elections has been in dire need of direction. I am however happy that Nana Addo who undoubtedly has a very loud voice in the party has taken it upon himself to provide the kind of leadership and direction needed.

I am also surprised at the manner in which the NDC has been shaken to the core just after one press conference by Nana Addo. They better get prepared for more because this is just a tip of the iceberg. In response to the issues Nana raised, I thought the NDC would have confronted the issues head on rather than employ people like Ablakwa to engage in senseless talk shops and hurl insults at Nana Addo and the NPP.

Nana Addo raised serious concerns that must be addressed urgently. The ever worsening state of the Ghanaian economy, the free fall of the cedi against other major currencies, increase in tuition fees in our universities for the next academic year and the increasing cost of living are the issues that the NDC should preoccupy itself with and not fighting against Nana Addo. The insults from Okudzeto Ablakwa and Tony Aidoo would not simply sell because these are mere diversionary tactics being employed by the NDC. Unseen before in the history of politics in Ghana Nana Addo was very benevolent in showing the NDC the path to follow in order to move our dear nation forward. He made adequate proposals to the NDC government on ways of militating against the current turbulent situation. The NDC must shown gratitude for this!

Clearly, Nana has shown that he is the kind of leader that this country needs to progress. He has indeed shown that he is capable of providing the nation with the kind of bold and visionary leadership that we require to be able to transform our society into a modernized system where poverty and disease will be a thing of the past.

As for us in the NPP, we cannot stay patient but wait for 2012 to come. No shaking Nana, no shake!!! 2012 is certainly yours. The fever is everywhere and the NDC have already been shown signals of your return.

All supporters and sympathizers of the NPP, as posited by Nana Akufo-Addo, must stay united and work relentlessly to ensure that the NPP comes back to power in 2012. The coast is very clear and Ghanaians are very eager to have the NPP back to power.

No matter how long the night is, that can never prevent the day from breaking!!!!!!

NANA SHALL SURELY BE BACK!!