IF I HAD TO ADVISE NANA AKUFO ADDO 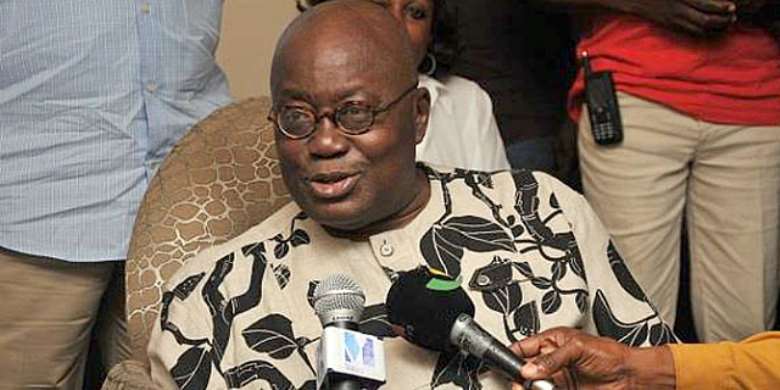 Without doubt, Nana Addo is the greatest President Ghana never had and, to my mind, may never have. I have been a great admirer of Nana Akufo Addo for a longtime. I had a better opportunity to listen and follow him from 1991 when Ghana started the process of transitioning to the fourth republican constitution. It was always refreshing to listen to Nana as he dazzled his audience with such intellectual breath and eloquence.

In 1998, as a university student in Cape Coast, I had no hesitation in supporting Nana Addo's presidential bid. I followed his campaign when he visited Cape Coast to campaign to be our presidential candidate. To some of us, his bid was long overdue. As a resident of Sunyani at the time it was easier for me to be at the congress grounds to help project our man Nana Addo at the Sunyani congress even though I had no vote. Ever since, I have supported Nana's presidential bid and I believe Nana will make a very good president for Ghana. Indeed in 2012 I travelled twice to Ghana from the US (May and December) to be part of the history that I was yearning for. Unfortunately this long cherished dream has not materialized.

The grace and humility with which Nana has accepted defeats and has been patient about biding his time is very praiseworthy. It speaks to the character of the man. He accepted defeat in an election with the closest of margins in Ghana's history and probably among the few in the world. Again, in 2012 he opted to use legal processes to challenge the results of elections that were riddled with so many malpractices.

Nana Addo's conduct since the results of the 2012 elections was announced, through the election petition and his graceful acceptance speech up until now has been very commendable. Indeed his exemplary and honorable conduct has won him a lot of respect and admiration not only in Ghana but across the globe. The number of high profile dignitaries who paid courtesy calls on him after the election petition and the subsequent invites he has had speaks to this. In Ghana today I can say, without any equivocation, that Nana Addo is one of the most respectable statesmen. In my opinion Nana is someone you can describe as a consummate politician, a democrat's democrat and a diplomat par excellence.

The question however is; with all the local and international respect Nana Addo has gained for his conduct will it be a good advice and a smart political move for us, the NPP party, to throw Nana Addo back into the vicious political campaign in Ghana? We all know how Nana Addo has been vilified by our political opponents. Any attempt to put him up again will likely give our opponents the opportunity to wipe off all the gains Nana has made for his personal image and that of our party. As the saying goes, it is always good to bow out when the applause is loudest. Nana is on a high note enjoying a lot of goodwill. Even though my dream and I believe that of many NPP members was to see a Nana Addo presidency but as the saying goes, man came to play his part and not to do all.

I think Nana has an opportunity to do a lot for himself, the NPP and Ghana as a whole irrespective of the fact that he is not the President. I understand he is writing a book. I whole heartedly support that decision. Beyond that I think Nana can set up a foundation to work for peace and democracy in Ghana and Africa. There will be a lot of international support for such an organization given Nana's pedigree now. In the NPP, Nana Addo can be the godfather that the party is fervently yearning for. If Nana pulls himself out of the presidential contest he will be in a better position to pull all the factions together to unite behind whoever emerges as the presidential candidate. Within Ghana, Nana will be a more unifying figure who will be able to work across party lines to build consensus on important national issues.

However, if Nana should contest he will be seen as part of the factions in the NPP and the polarization within Ghana thereby reducing his stature and influence and eventually diminishing the opportunities above.

My personal reading of the political system in Ghana is that, Ghanaians are hesitant to change a sitting president. 2016 presents a stiffer challenge for the NPP than we experienced in 2012. It will therefore require a lot of political maneuvering, strategizing and consensus on the part of NPP to truncate John Mahama's presidency. We need all hands on deck and we have to be very competitive among the floating voters and in the NDC strongholds. There is no gainsaying the fact that Nana Addo is the most popular figure in NPP now. Anyone who will attempt to contest Nana in the NPP primary will be humiliated. It is as simple as that. However, can we market Nana as the candidate for floating voters and especially the minority tribes which happen to be the stronghold of the NDC? We have marketed Nana Addo twice so we have a fair idea of how successful or unsuccessful we have been at this effort. If the 2008 and 2012 (with some caution) elections are anything to go by we all know how herculean that task has been.

I have argued before on other fora that given the gains NDC has made in our strongholds, we have to also burrow deeper into their strongholds in order to make us competitive for power in 2016. Much of the NDC success in our strongholds is due to their success at extricating themselves from the Rawlings factor and their success at tagging us as an akan or asante-akyem party. It is an undeniable fact that the two parties draw their support from certain tribes or parts of the country. Unfortunately for us our Achilles heels are the northern regions and Volta which coincidentally is the NDC's 'world bank'. These are also the areas where the akan (asante-akyem) tag or the propaganda of minority tribes marginalization in the NPP works most. As I have argued before, the best way to fight this tag is not by our usual intellectual arguments. It is by showing or displaying that we value all tribes and people and that one can aspire to any position in NPP irrespective of their ethnicity. Our intellectual arguments haven't worked as the NDC seem to be winning this argument.

Since 1992, while the NDC has selected their presidential candidates from 3 ethnic backgrounds and regions we have selected our candidates from one ethnic background and two regions. This obviously is not the best way to fight the akan tag. I am not by any stretch of the imagination positing that the akan tag is the cine quo non of NPP's woes. Neither am I arguing that by selecting a candidate from a minority tribe the akan tag will automatically evaporate. I however believe, based on the influence of tribe in the voting pattern of Ghanaian voters, that we will do ourselves a lot of good if we could have a candidate from a different ethnicity. My reading of the political climate in Ghana is that it will be almost impossible for us to wrestle power from John Mahama if we go with an Akan candidate in 2016. Our Akan strongholds seem somehow saturated. We have to take the fight to the NDC. We need someone new who will afford us the opportunity to rebrand our party and make it more appealing to floating and minority voters.

I speak here of Dr. Mahamudu Bawumia. I am not sure I will be the best advocate for Dr Bawumia as I haven't had any close relationship with him. But my own reading of the political terrain in Ghana and the little I have seen of the man convinces me that he is our best hope if we want to wrestle power from John Mahama in 2016. Dr Bawumia is seen as;

Less political dirt for our opponents to use against him

I am not sure Dr Bawumia has expressed any interest in running for the presidency. If Nana Addo intends to run, I doubt if Dr Bawumia will contest Nana Addo even if he is prevailed upon. One of the best decisions Nana made in his campaign was to nominate Dr Bawumia, a man with so much potential, promise and talent. When Nana Addo asked Dr Bawumia to go on a thank you tour on his behalf, I thought Nana was about to hand over the button to Dr Bawumia. However, criticisms of the thank you tour and calls on Nana Addo to contest seem to be swaying Nana Addo back into the race.

But I think the NPP needs to have a proper introspection and reflection of the state of our party, our political fortunes and how best to position our party for the 2016 contest. This reflection should be more sober, less emotive and devoid of personal idiosyncrasies. We should be more strategic in our thinking and focus on how we can put our best foot forward. I don't know how Dr Bawumia will fare in an NPP primary. He may not be the most popular person in NPP but I know he will help us to be more competitive in most of the regions where our fortunes have been less flattering. Dr Bawumia will need both Nana Addo and all the influential personalities in the NPP. We have a lot of potential presidential candidates who may be very popular in the NPP but not so much nationally. The party will have to build some consensus among the potential presidential candidates in order to pave way for Dr Bawumia. This is where Nana Addo's influence and that of President Kufour may be critical. It doesn't matter even if we have to cut deals on who partners Bawumia including what is in it for all the other candidates. Of course I don't expect all the potential candidates to agree so there will definitely be a primary. However, we can build a groundswell of support among the potential candidates for Dr Bawumia's candidature such that the primary will be a walk over. I am not in any way suggesting Dr Bawumia cannot win on his own steam. He has built considerable goodwill and support in the NPP to be able to run on his own steam. But if we can reduce the competition and build consensus it will improve unity within the party and ultimately support for the presidential candidate.

This is my contribution in helping Nana Addo to reach a decision about his political future. Our party is at the mercy of Nana. As the most popular person in the party currently, a lot depends on him. It is therefore incumbent on us to help Nana by bringing all the different perspectives to bear on him. As I have argued here, a compromise candidate is what we need and I find that in Dr Mahamudu Bawumia. Let's cease the opportunity when it is more potent