Prosecute ACP Kofi Boakye not reinstate him in the police service 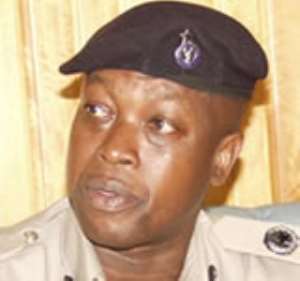 My attention has been drawn to a news item carried by Joyfm on the fate of ACP Kofi Boakye the former Director of Operations of the Ghana Police Service. ACP Kofi Boakye is reported to have called on the Police Council to reinstate him with full benefits in the Police Service. He was supported in this call by the self described "ace" journalist and NPP serial praise singer Kwaku Baako Abdul Malik on Metro TV Newspaper review program.

It will be recalled that ACP Kofi Boakye was found culpable by the Georgina Wood committee that investigated the mysterious disappearance of a large quantity of cocaine from MV Benjamin and subsequently the committee recommended that he should be prosecuted for his role in this saga.

Instead of implementing the committee's recommendation, the Police Service rather interdicted him and he has been recieving his full salary and other benefits since then for no work done. This was way back in 2005. The decision to interdict him instead of firing him and prosecuting him as recommended by the committee of inquiry was itself a scandalous act and an insult to Ghanaian taxpayers by the NPP government which saw nothing wrong with even the worst deeds among its members.

To me, his interdiction was like a study leave awarded him, a reward instead of letting him face the law as all citizens are supposed to when they fall foul of the law. Now ACP Kofi Boakye used his "study leave" erroneously being referred to as interdiction to go to Law School which I congratulate him.

But this doesn't take anything away from the fact that he is an alleged criminal and he has criminal charges to answer according to Georgina Wood Committee. Forget about Kweku Baako's assertion that he (Kofi Boakye) has a huge potential embedded in him and cannot be allowed to go waste. I bet there are hundreds if not thousands of hardworking Police Officers as talented (if not more) as Kofi Boakye, the difference, they have not had the chances Kofi Boakye through his political (and I dare add his tribal) connections bestowed on him. He had his chances and blew them. Such a person is a disgrace to the Police Service and Ghana will be better off without his service. He should be fired and prosecuted in the M.V Benjamin cocaine saga period. If he is acquitted by the courts, he can go into private practice with his newly acquired law degree.

Now the NPP seem to have learned nothing from their return to opposition as demonstrated by their willingness and readiness to defend the indefensible......examples abound.......Chinery Hesse,stolen government cars,looting of government bungalows, Sekyi Hughes , Wereko Brobbey , and a whole lot of other improprieties etc. When the prosecution starts, maybe Nsawam will not be big enough to accommodate them all. We will surely need a maximum security prison to rake them all in.

I think the party has a serious credibility gap now. Theirs was a property owning democracy, so people in government had to acquire property legally and illegally, through fair or foul means, bu hook or crook and damned the poor and the masses who voted for them.This led to an antithesis of anti-democratic governance system- in effect, "a privately held government" where the lust for naked power and the greed to acquire property traded places as the means and the end. That explained their desperation to hang on to power at all cost even when it was clear the good people of Ghana has rejected them. The eight years of NPP rule was "government of the greed, by the greed, and for the greed".........others have variously described it as "lootocracy" or "Kleptocracy". Most of NPP members participated in the loot and the greed but it would be very interesting to hear from any relective and conscientious members now on their misdeeds while in office.They were going around begging the people for forgiveness during the round off elections last December. In opposition, let them apologise to Ghanaians and maybe we will consider it a genuine apology instead of displaying the same level of arrogance and self importance that sent them crashing to defeat.

The Mills government must move quickly to punish in a very stern manner those who have looted state coffers. Not even a single one of them must be allowed to go scot free. Instilling discipline, morality, fairness, justice,participatory and accountable governance should be the way forward. Corruption has to be tackled head on not in any half hearted manner. I agree with Kwesi Pratt Jnr. It's high time President Mills "cracked the damned whip". Five months is a long, long time, and the President hasn't done much to dispel the public perception that he runs a weak and inefficient government.

Ben Ofosu-Appiah, Tokyo, Japan.
The writer is a Public Policy Expert and Policy Strategist based in Tokyo, Japan. He welcomes your comments.

Brazil's president contracts virus as US starts WHO withdraw...
33 minutes ago