North Korea Unlikely To Give Up Its Nuclear Weapons Program 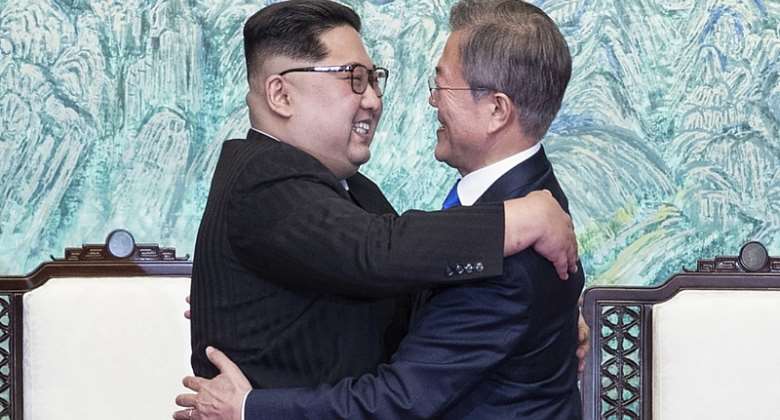 The question has been asked many times. Will North Korea give up its nuclear program? The answer is not likely. Despite the thaw in relations between the North and the South, and the end to name calling between Trump and Kim Jong un, (a welcome relief) it is all something we have seen before. Brinkmanship. To the brink and back. Tensions flaring and easing. All part of international politics.

There is no doubt that even casual observers of international diplomacy saw that the summit between the North Korea leader and the South Korean President last week in the demilitarized zone was a major success. It was the first such summit in a decade and the first time a North Korean leader actually crossed the border to the South. Huge in its symbolism. In the Summit declaration, the two Koreas pledged to work towards a peace treaty by the end of the year (something likely to happen if Trump does not throw a spanner in the spokes) to formally end the Korea war, and declared their commitment to work towards a “complete denuclearization of the Korean peninsula”. This is the biggie. What does that mean?

Prior to that, North Korea had announced the suspension of all missile tests. That only makes sense because they have been media reports of the collapse of their underground testing site which has reportedly caved in as a result of the testing of their most powerful weapon to date. If these reports are true, then it means they don’t have a testing site to continue testing missiles for now until they build a new one. So this suspension of tests announcement and sudden interest in peace overtures to the South and willingness to negotiate may be an excuse to buy time, so they can develop a new testing site heavily fortified and deeper underground. This, they can do. If you have ever visited Pyongyang, you will notice their subway system is the deepest in the world almost a kilometer deep underground and this was constructed in the 1960’s. The purpose is for it to serve as a bunker and shelter when the Americans invade.

In a subsequent summit between the two Koreas in 2007, North Korea again declared an end to its nuclear program and in a demonstration of its ‘commitment’ to denuclearize, invited the world’s press to come witness the blowing up of a nuclear cooling reactor in Pyongyang. In June 2008. The international press were allowed to witness and air live the demolition of a cooling tower at the Nyongbyon reactor site, a year after the US and four other nations reached an agreement with North Korea to disable its nuclear facilities in return for an aid package worth $400m. The deal collapsed after North Korea refused to accept US proposed verification methods and they went ahead to conduct their second nuclear test detonation in May 2009.

So you see, we have been here before many times in the past. They have declared an end or an intention to end their nuclear program before only to go back on their own word and start testing again. Ten years ago they publicly blew up that cooling reactor saying they were stopping all nuclear activities only to resume with even much sophisticated activities at a speed not known before. Ten years ago, I didn’t believe them when they made that public declaration and today, I don’t. North Korea is a master of deception, and they play the game better than anyone. Ten years ago, when they blew that reactor to deceive the world, I knew they had developed a much more sophisticated underground facilities hidden from the prying eyes of American satellites and International Atomic Energy Commission (IAEA).

Today, according to many experts, they have perfected their program. They have developed the bomb and the means to deliver it. Some experts even believed they are capable of putting a nuclear head on Inter Continental Ballistic Missile (ICBM). They have short range missiles and medium range ones. Their ICBMs are capable of hitting the United States mainland, short range missiles capable of hitting South Korea and Japan, and medium range missiles capable of reaching Hawaii and Guam. They have all the targets covered. They don’t need to continue testing. They are confident that they can now negotiate from a position of strength. They want the World to admit them rather reluctantly into that exclusive club of Nuclear powers ironically, rather peacefully. If that doesn’t happen, they are willing to gate crash the party.

When both North Korea and South Korea declared they want to work to “denuclearize the Korean peninsula”, it means different things to both sides. The devil is in the interpretation. To the US and South Korea (and Japan), it means an end to North Koreans nuclear program but to the North Koreans, that means the removal of all US troops and nuclear arsenal from South Korea and Japan. This is something the United States is not willing to consider. North Korea may have China’s tacit agreement on this one, in linking the end of its own nuclear program with the removal of over 150,000 US troops from Japan and South Korea and the removal of the US nuclear umbrella covering those countries. Frankly, this is something the US is not willing to put on the table for discussion. So there’s a stalemate right there. If the summit with Trump fails, China may relax sanctions against North Korea so long as they maintain the rapprochement with South Korea.

It is very hard to believe that the North Koreans will give up something they have been working so hard for, for 50 years to achieve just when they have it. Remember, there is this difference between North Korea and South Korea economically today because the North marshalled all economic resources into its nuclear program at the expense of other sectors because they genuinely believed that the only way to ensure their country survived was to acquire nuclear weapons. They have a genuine concern and fear that without nuclear weapons, America will invade someday.

So today when John Bolton, Donald Trump’s National Security Advisor, holds up the Libyan model as the way they want North Korea to go, Kim Jong un is pretty much aware of what happened to Gaddafi when he diplomatically gave up his nuclear program. He was killed by American back rebels and with America air power. Pyongyang always cites the fates of Saddam Hussein – who was overthrown in an American led invasion, and Gaddafi’s case as the need to have nuclear weapons as a deterrent. They want the Americans to give a firm pledge and a promise that they would NEVER invade North Korea and also a commitment to remove its troops and nuclear arsenal from the Korean peninsula. These are tough conditions that the Americans may not agree to so I don’t see North Korea giving up its nuclear program. Not likely.