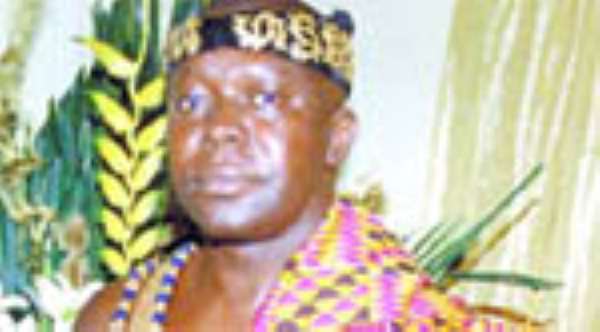 KOSMSOS ENERGY, a giant oil mining company in the country operating in Sekondi-Takoradi has donated a whopping GH¢10,000 to the Otumfuo Education Fund.

The gesture which forms part of the company's social responsibilities is aimed at helping the Asantehene realize his dreams of helping brilliant but needy students in the country to attain their academic ambitions.

The presentation which coincided with the second Akwasidae festival of the year was graced by high-powered government officials, including Kwadwo Mpiani, Chief of Staff; and Madam Patricia Appiagyei, Kumasi Metropolitan Assembly (KMA) Chief Executive.

Otumfuo Osei Tutu II, the Asantehene, dressed in a rich kente cloth, with gold ornaments to match, sat in state amidst drumming, dancing and firing of musketry by the royal guards at the palace.

Addressing the gathering after the donation, John Musserman Jim, Chief Executive Officer of Kosmos Energy expressed hope that the benevolent gesture which was the widow's mite of the company, would help Otumfuo extend education to every child of school-going age in the country.

He commended the people of Ghana for giving his company the opportunity to operate in the country, and expressed hope that activities of his outfit would help transform the local economy and better the lives of Ghanaians.