Is The Ghanaian Diaspora Ready For A Third Party? 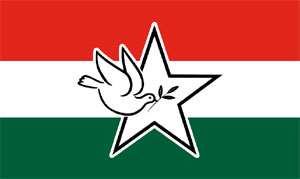 Inside Politics: Is The Ghanaian Diaspora Ready For A Third Party? Introducing Ghana Social Democratic Movement (GSDM) Fellow Ghanaians let's not think of what Ghana can do for us but what we can do for Ghana (Borrowing from President Kennedy).

As a concerned citizen and especially one who believes that Ghana's redemption shall come from the Diaspora, it is refreshing to learn that besides individual diasporans hoping and in fact striving to penetrate into the top decision apparatus of the nation a movement with roots from the Diaspora is already registered and doing business in Ghana to educate the masses. According to the leader of the GSDM, it is the goal of the movement to soon translate itself into a political party that will seek for three key elements in the lives of Ghanaians as depicted in their symbol- Peace, Freedom and Justice.

In this dark hour of our country's history where corruption abounds in Ghana, it is daring to find a movement choosing as its symbol a dove. Simply because a dove as we all know is a symbol of holiness or purity. In his Feature Article of Sunday, 11 September 2005, Aidoo under his sub-heading, “Where is Ghana heading to?” wrote: “Blessed are those who survive with the rhythm of the universe; for their souls shall not envisage the iniquity of nature. Woe betides ye who seek for the natural talent, which is like a dangerous decease within the body that takes several decades to destroy the soul; for ye shall never be free from, sorrow, oppression, moral and the iniquity of nature” (Prince Aidoo). He also wrote, “The crow will never stop crowing until those who are sleeping hear the sound of his voice and wake-up. This crow will not stop crowing until the dead hears this voice. It is a voice that the righteous are ready to hear. It is a voice that the evil will not like to hear because of his iniquity against humanity.” Never before has one dared to talk so boldly about holiness in politics than Mr. Aidoo.

So what message exactly is being portrayed by Ghana Social Democratic Movement? Do we as a people accept that for our words/views to be respected, we must as well practice what we preach? After all, “Action speaks louder than words.” Hitherto this had not been true in politics. Politicians had come and preached to us all the fine sermons one could dream of, assuring us that they would live to their words. No later than sooner did they break their promise. Then (when elected) they tell us to do what they say but not what they do. Leadership indeed!

Folks, this should be history. We should now hold our politicians (leaders) accountable. They cannot tell us one thing, win our vote and confidence and do the contrary. It is at this backdrop that I congratulate Prince Aidoo for daring to choose the dove as the symbol of his movement because, he, especially coming from the Diaspora understands that the action of a politician or leader is not separate from his office.

THE DOVE (As a symbol)

This author is particularly interested in the symbol of the GSDM. What does this symbol mean and what motivated the choice of the dove above all animals or icons? In a private conversation with the leader of GSDM he said, “Our symbol means, we the voice of the new generation, are descending like a Dove with three leafs into Ghana. The first leaf means, Peace, the second in the middle means Freedom, and the third means Justice. These are the three core principles of the Ghana Social Democratic Movement.”

According to the leadership, it is the hope of the GSDM that having chosen the dove as its symbol anyone running on her ticket would live beyond reproach; that the GSDM would not be a save-haven for evil political practices.

Well said but how would this be enforced such that GSDM does not become like one of the many and lose its touch of purity? This is the question they would have to answer to the electorate, come the time they present themselves for a mandate from the people. Look out for the Ghana Social Democratic Movement! Meanwhile it is the prayer of this author that the GSDM would be able to give its members the orientation befitting the life of the dove.

Politics unfortunately has come to be known as a dirty game, no wonder we are often cautioned to keep God's name out of politics. The irony is that when our politicians are in trouble the first place they go to is the Church. This author therefore believes that God must be an integral part of politics. We cannot place God on the shelves when we know very well that it is only the fear of God that keeps one from engaging in corruption. In other words, politics per se is not a dirty game. Rather it is only the players who have been dirty from our past experiences. Please don't let us dismiss all who come in the name of purity by saying that we have many religious people in Ghana yet Ghanaians are all victims of corruption. The issue is how many Christians actively get involve in our politics? The problem of corruption in Ghana has more to do with the government than the Churches or religious bodies so let's give the GSDM a chance to make her case.

In a private telephone interview the leader of the Movement stressed that there should be a day that Ghana shall be redeemed. The leadership of GSDM thus, admits that although Ghana is made up of many God fearing people Ghana has not had trust worthy leaders. Now Ghana needs a leader who will work like the dove; a leader who is clean and spotless like the dove. No matter how we look at it, it is imperative that we let in clean/virgin players into the politics of Ghana to transform the country. This is a serious business that needs our careful consideration. Politics is about protecting and preserving precious human lives in a polity therefore, we need to look at it with our every serious attention. How long shall we continue to endorse dirty players and hope that they or things would get better? “You cannot show old cat new tricks.” So goes a popular saying.

We often refer to optimists in politics, especially in Ghana as dreamers. Because many of our folks still think Ghana (and for that matter Africa) is broken beyond repairs. No. There is still room for success. Whatever leader Ghana shall choose in 2008 would be our voice into the future. We all have a responsibility to repair/fix our nation. Therefore we must wake up from our slumber of defeat. We can't throw in the towel now.

Ghana cannot say she is free so long as able-bodied persons don't find jobs to do. Poverty is slavery. Therefore Ghana's freedom must be tied with economic emancipation. In his article Aidoo wrote,

“This evil in our society will never be free until he is forced to hear this undisputed voice of the New African. It is the voice those who are in political bondage will like to hear because their redeemer is coming to release them from economic and social injustice. It is the voice that will shake the three pillars of evil. I say to you today that I have a vision that our motherland Ghana shall be reformed. I have a vision that the day is coming when people shall lift up their voices together and shall sing the song of freedom and justice once again in their lifetime. They shall see the light when the New African appears in their midst and shall demand without condition the “freedom and justice” that has been stolen from them some 49 years ago.”

In creating jobs for their people, this author thinks it is a right observation when the GSDM argue that in spite of the many borrowing from the IMF our leaders under whose watch these loans were made cannot tell us how many industries they have been able to create. At best Ghana is a neo-colonial entity. Unfortunately this time we are not colonized by compulsion but by choice of our own indigenous political elite. No wonder Nkrumah has now become the symbol of Ghana's future; because out of all our political leaders he seems to be the very one with his name on structures and developments Ghana still can boast of. What became of Rawlings 19 years in office? Hopefully, Kufour would do something to save his name in Ghana's political annals of fame? Who knows? We have to give him the benefit of the doubt.

There is no peace if our government cannot enforce the laws of the land. Nor can we say Ghana is peaceful if certain personalities are deemed to be above the law. “Our reformation strategy is to revisit our constitution and to ensure that there is justice written in it. We shall ensure that never again shall anyone be seen to be above the law of this republic. A lawless country is a useless country” (Prince Aidoo). GSDM asserts that Ghana is now witnessing politicians who are criminals, murderers, liars, intellectual arrogant, money-conscious, tribalistic, envious, and above all corrupt? Thus, GSDM highlights that Ghana's politicians have dampened Ghana's hopes for a better tomorrow and in the process, have destroyed the nation, her culture and her good name. “Forty nine years later, the life of the average Ghanaian is still sadly crippled by the manacles of segregation and the chains of corruption, murder, wickedness, discrimination and tribalism”(Prince Aido)

According to his article, the birth of GSDM has its vision to intervene in Ghana's disgraceful political scene and to pick-up the pieces left over in her 49 years painful political history. This author also shares the view that, Ghana now needs leaders who will carry out “their vision in collective selflessness, denying themselves any acts of individualism, with the hope that in the end, the achievement of their cherished dreams, the liberation of Ghana, the then Gold Coast, from the shackles of mental, physical, and psychological slavery, as well as from white colonial domination and superiority in our own land would justify the struggle” (Prince Aidoo).

Unfortunately the Establishment does not think that corruption, nepotism, tribalism and lies in the state apparatus are any big deal to Ghana's development. No doubt the Establishment may resist any reforms from the Diaspora, like Dr. Kennedy's reforming the NPP, on the one count that they (The Establishment) have lived in the country all these years and know what Ghana needs better than any one abroad; but are Ghanaians going to be fooled again? Let the people decide. However, this author believes that Ghana's political front especially the two major parties, NPP and NDC as of today urgently needs reformation if they want to go any far in 2008. The nation is not satisfied with their empty rhetoric. This author hopes and believes that ere long Ghanaians will break their culture of silence and unite behind the Diaspora voice to redeem Ghana. Views expressed by the author(s) do not necessarily reflect those of GhanaHomePage.