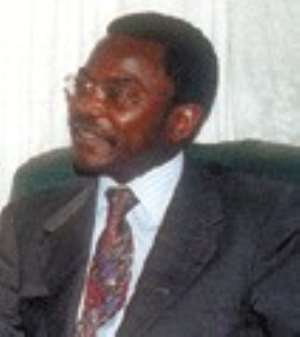 – AFRICA'S BANK GOVERNOR OF THE YEAR

We have to applaud Dr. Acquah if he was voted Governor of the Year. As reported in Ghanaweb, 2005, Nov.15, and reported by Sophia Hoffman, we read: “The Emerging Markets award for Central Bank Governor of the Year is based on nominations from investment banks, analysts and economists” (World Bank/IMF Edition, Sept.25, 2005).

There are definitely lots to be done about our archaic Banking system in Ghana, and it looks like Acquah is trying. [This is not an Osafo-Marfo type of award, mind you]. Anybody who has opened an account in a Ghana Bank, judging from the US standards of measurement, will wonder the requirement and regulations and how they can even survive till today with no national ID system and no street addressing system for a database creation. Folks, let's not see partisan politics into everything. Ideally the Governor of the Bank of Ghana should be independent of the power politics. However, in the real world we know some politician leader has to appoint them and therefore as normal, they may have a certain tendency to soften up toward policies of whoever appointed them.

1. For the first time in 35 years the Cedi has actually appreciated with respect to the dollar. In November 2003 when this writer was in Ghana the cedi was C9,500 to $1. Today it is around C9009 to $1. This is definitely an achievement worth praising.

2. I am particularly desirous to know how it took him difficult LEGAL battles to lay off (reduce staff) by 1,000 people. Is it a law not to lay people off in Ghana? If people have life long jobs, that is one major factor we never can balance any budget and we keep increasing taxes in order to pay people who may not necessarily be productive. I have to admit that one of the most difficult aspects of life I learnt myself was to fire people even when they were not productive or meeting goals. It is not easy. However, what a creative CEO can do is job training and re-assignment to new duties. There are many ways the Banking Sector can modernize and I am even surprised that in 4 years the Governor has not completed full computerization.

2. The other important statement was the fiscal discipline. If this means not printing money when we don't have money to pay workers, I say BRAVO! Fiscal discipline simply means taking care of public funds like one would do his own. One does not spend money one does not have. If you do, it is borrowing or stealing!

Our culture seems to be completely deteriorating compared to when some of us were growing up in the 1950s/60s. It used to be one's word was a bond. Today relatives are desperate to dupe relatives. Ghana has become a nation of desperate people due obviously to the poor leadership we have had for over 30 years. Everybody in Ghana seems to live on money they don't have, and anybody at all seems desirous to deceive in order to make ends meet. Some of us with a softer heart have had to develop very hard shells in order to survive in Ghana. Family units always want to have a so-called fitting burial when they have no idea where the money is going to come from! They always wait on relatives from overseas to pay the bills. This goes all the way to the man at the top, the President of Ghana. President Rawlings ordered many Toyota Landcruiser vehicles, and so President Kufuor also has to order $450,000 worth of bullet-proof Toyota Landcruiser vehicles! We have never heard of government cutting costs! Instead the President has 88 Ministers doing a job that should be done by no more than say 15 to 20.

3. The article quoted Dr. Acquah as saying: “Subsistence agriculture accounts for 41% of GDP and employs 60% of the work force, which consists mainly of small landholders” (Ghanaweb, 2005, Nov.15). One wonders if the Governor would see it fit to allocate funds for rural road, communication and water infrastructural development. We always quote figures, but did anybody ever think that the rural people producing 41% of the nation's GDP are also human beings?

How much money are really allocated for developing roads, water, electricity and phone networks for these 70% of the people. The governor and the President both should bore their heads in shame! We have words we quote but we do not attach human faces to them! We the elites have failed our people if 70% of them /50% of the world force and 41% producing our national wealth are denied water, electricity, decent roads and phone lines!

4. Again, the governor is quoted as” “The current challenge is to computerize the bank's systems and operations fully”.

Mr. Governor, how do you computerize banking when you are using a P.O.BOX 39 for everybody in my village? I am sure the Governor is aware of the databases systems he was familiar with in the USA. Sir, one does not have to be an engineer to appreciate this databases system. Lee Kuan Yew of Singapore is a Lawyer and he has wired all his classrooms and city-state. Don't let us give excuses that it is a small city state. At least we are more than 10 times what Singapore has in population and resources (except money). Are we listening to experts or the economists are making all the decision for Ghana?

5. The governor also said: “Poverty reduction remains the central goal of the government”. One hope the governor was misquoted. There are terms thrown about in Ghana that we need to understand. Poverty Reduction is not a Goal. It is a Vision. It is a vision that no society in the world has ever met, not the United States and not Britain nor any society. Poor people are in every country.

6. The governor talks about “Macroeconomic stability and full capital account convertibility, which allows unrestricted financial flows in and out of the country”.

If I may borrow an American expression, I'd' say Waoh! This is the first time such words have ever been used since the 1960 that the writer can recall. The stability of our currency and our economy to be stabilized is only in fable tales in Ghana. For money to be transferable from Ghana and for us to become part of the international currency exchange is perhaps the greatest financial revolution and coup we have ever seen!! [Note I used the word financial]

1. I strongly suggest if you want any job done in Computerization, forget about government bidding process, hire a Chief Technical officer [if you don't have one] and have him use a purchase order and monitor and audit him/her. Government bidding is very inefficient, corrupted, and prices are inflated. Anybody can buy computers cheap now from the Internet at half the price a bidding process will quote. People at your level should have the autonomy to make such effective decisions.

2. Again in the computerization, a database is the system you are interested in for a Banking system. You are doing well, Mr. Governor, but this writer suggests strongly you seek technical advice and collaboration with other Ministries, and don't think you can computerize with a P.O.BOX 39 as we have in our villages. It won't work. We need to do some simple homework first. You need to work with the District Assemblies and the Minister of Interior and the Lands Commissioner to create street and house identification systems and the national ID system for individuals. [This may be my 10th time of writing on this in the last 30 years!].

3. On Poverty Reduction, let us be realistic and not that poor people are in every country. Let me make a suggestion. If the national Vision is truly to reduce poverty, we need to define the level of income or other HDI [Human development Index] criteria for this target Goal. Then we need to craft well articulated STRATEGIC GOALS, break them down into smaller sub-Goals or Objectives of what is to be done, who is responsible for each, when, and with what budget. PUBLISH THIS! It makes the job easier for you and the President to know how well we are really doing. At least this is how things get done in the Profit-making world. We have heard this clarion call to reduce poverty before under many leaders; including Jerry Rawlings and we are still crying poverty!

Cheers, Kwaku A. Danso, President Ghana Leadership Union, Inc. (NGO) Views expressed by the author(s) do not necessarily reflect those of GhanaHomePage.