Kennedy Agyapong (Hon) is the immediate future president Ghananeeds to solve her problems - I am for Ken! 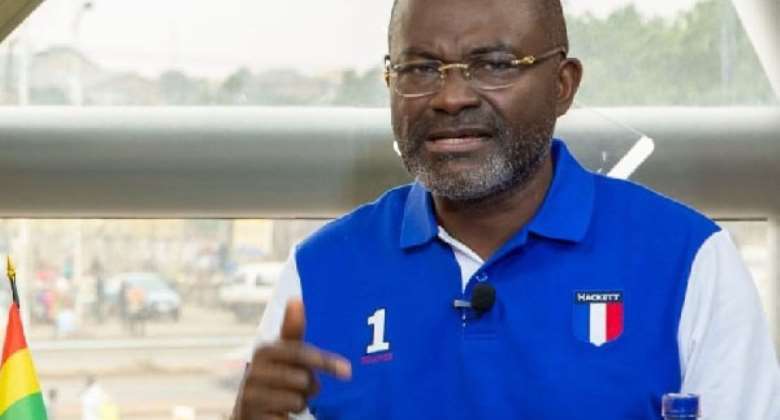 Time and again, I, Rockson Adofo, the proud and fearless son of Kumawu/Asiampa who self-styles himself as the voice for the voiceless, had said that his choices of persons for the presidency come election 2024 are:

I have not reneged on my gospel-truthful belief, conviction and assertion. And, I have not rescinded my decision to campaign for any of them were they to put themselves forward for the presidential-candidacy for election 2024.

Having given thoughtful consideration to the genesis and chronology of the problems that have brought Ghana thus far, and onto her knees, I have settled on Kennedy Agyapong (Hon), as the first-choice person who can honestly capably and ably apply the needed life-saving bitter concoction to the nation-threatening ailments come to torment and engulf Ghana, my country of birth.

Yes, Ghana's economic situation has currently worsened owing to the affliction of the fatally excruciating Covid-19 pandemic and the ongoing devastating Russia/Ukraine war that many a president or government has no absolute control over their adverse effects on their countries but only to try to mitigate them. For this fact, I am aware!

However, the other problems that have become chronic and are known to rob and shame Ghana as a country and Ghanaians as a people, are those that I am talking about as informing my decision to go for Kennedy Agyapong, the man I perceive, if not convinced, to have the clout to sincerely liberate the nation from their clutches.

Endemic official corruption, embezzlement of funds and state assets, non-enforcement of the laws of the land, ramifications and applications of foreign religions in the country to the detriment of our collective interests and well-being, intensification of criminal activities in the country committed with impunity, wanton destruction of the lands, water bodies, air and forests (ecology), murders and arson, only but to mention a few, could better and effectively be addressed by Kennedy. For that I am certain!

He can better apply Meritocracy, Pragmatism and Honesty, when forming his future government because he has proven time and again, that positions and offers are given to he who merits it but not awarded on the basis of whom you know, the opposite to what is known to apply in Ghana until today.

When the son of an NDC executive member in Central region had 8 As in his final West African Senior School Certificate Examination (WASSCE) last year, Kennedy offered him a US$84,000 per year scholarship for three or four years to attend Harvard University in the United States of America to study medicine.

He said, "I don't care about the father of the boy belonging to the National Democratic Congress (NDC), my rival political party. All that I care about is the fact the boy is a Ghanaian. He has done well and has the potential to be a great person if he was assisted. The political party himself, or his father belongs to is irrelevant to me".

Yes, this is the man Ghana needs but not those who will either break the laws themselves or help others to break them.

In the case of his son, if he had told the police officer yes, he is my son, your guess is as good as mine, the police officer would have let his son off the hook. That is Ghana for you hence people committing crimes with impunity.

The above two cited examples have something in common with demonstrable actions of meritocracy and honesty.

Many a time, Kennedy has demonstrated pragmatism in his dealings. The religious knowledge of Ghanaians is destroying not only the country but the people themselves, yet all presidents and governments so far feel so impotent to address the canker, all for shabby reasons only best known to them only.

Barring all tribalism and its associated political nonsense, if Ghanaians do seek better Ghana with its concomitant benefits for all, I call on you to seriously consider any future candidacy of Kennedy Agyapong (Hon) for the presidency.

If he is chosen as the New Patriotic Party (NPP) flagbearer and presidential-candidate, he will surely break the 8-year cyclical rotation of political power between the NDC and the NPP.

I will suggest to him strategies that will win him the presidency provided he will be ready to drink from my overflowing fountain of wisdom and abundance of political strategies.

I shall be penning down about three strategies to pass on to Kennedy in total confidence and in secret. I shall tell him why, how and when to carry that message to the Ghanaian public.

He will be the one able to implement those strategies to win him power and again, translate them into practical policies to solving Ghana's chronic problems to move Ghana forward.

Any known negative things people intend to use against Kennedy, such as he waist-deep into insulting people, will not wash and I shall come out fully to defend him, assigning persuasive reasons.

How I wish all the above mentioned people could form a perfect team and government to run Ghana. Each of them has the good intention of Ghana at heart but Kennedy is the one seen to be able to take the bull by the horn, regardless.

From the video below on how Singapore developed, ask yourself if Kennedy has not already proven right the three methods, the economic pillars on which Singapore revolved and continues to revolve, in his private life, to capably put Ghana on the right economic footing?