Dr. Kwasi Botchwey And - The United Wolves - On Their Way 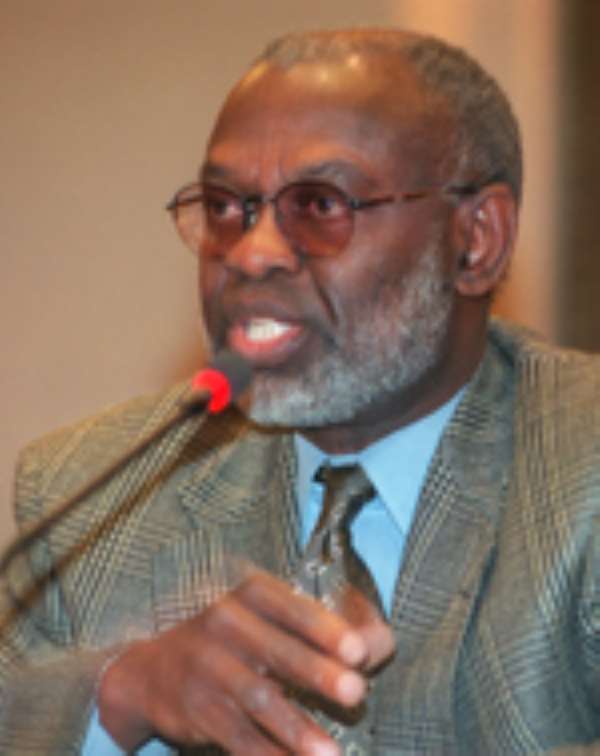 Dr. Kwesi Botchwey and his united “Wolves in Sheep Skins” are on their way to milk Ghana dry for the third time. They have not finished eating the crumbs of the “CAKE” left for the blind Ghanaian. NLC (National Liberation Council), N.L.M, U.P (United Party) and the latest PNDC regime, has distracted Ghana from achieving its industrialisation and democratic dream and the country now finds its self in such a terrible shape. They felt yet not satisfied despite this fact. The national “CAKE” that was baked for over past 45 years is yet to be finished entirely by the same disgruntled Wolves. Rawlings came and Ghanaians said; let the “BLOOD FLOW” J.J, and it did for nothing. The wolves: Dr. Botchwey, Rawlings, Dr. Obed Asamoah, Professor J.E.A. Mills and their accomplices are on their way for the third time. They are now fighting among themselves because of leadership. On the question of Botchwey´s relationship with Professor J.E.A. Mills, he said they were school mates and that he had great respect for him and hoped that the right playing field would be created for both of them at the congress to determine who leads the party in 2004.

Dr. Botchwey, when asked whether his relationship with Dr. Obed Asamoah had any influence on his decision to contest, replied in the negative and said the only time he saw Dr. Asamoah physically was between 1994-1995, shortly before he left for abroad. They are like “Greedy Dogs” which can never have enough. They are even fighting over the crumbs of cake on the ground which was left for the poor.

Now they are dressed in the “Sheep Skin” of (NDC) the so-called democratic elected party; thanks to their introduction of the famous “INDEMNITY CLAUSE” before they left office. Yes they are on their way because our “Our Blind Constitutional Rulers” have made it possible for any Stupid leader to change our baseless and lawless Constitution without course. Everyone can amend it anyhow to suite them.

Yes, this useless Clause states: This Clause 34 (2) of the Indemnity Clause of the Transitional Provisions, which provides protection for act or omission during the administration of PNDC. It says, “It is not lawful for any court or tribunal to entertain any action or take decision or make any order or grant any remedy or relief in any proceedings instituted against the Government of Ghana whether before or after the coming into force of this Constitution or against any person or persons acting in concert or individual to assist or bring about the change in government which took place on February 24, 1996, January 13, 1992, June 4, 1979 and December 31, 1981 in respect of any act or omission.”

The Curse of Kwame Nkrumah on Ghana has now materialised. “The evil that men do lives after them”. Now our dear Ghana is now called Mr. HIPC after 45 years, the young generation are deprived of free education, justice, accountability. Poverty is now the National Anthem of the youth. Our “SILLY” and irresponsible leaders will stand up an Salute this meaningless Anthem sang by the youth. Our industrial revolution is no where to be found. Intellectuals are leaving the country to seek for better living. They left us nothing.

Now our new President is forced to go globe-trotting trying desperately to invite foreign investors to set up industries to create employment for our youth. He is now going to this same colonial masters who ill-advised Ghanaians to do away with Kwame Nkrumah because he was said to be a threat to Ghana´s political emancipation. He was a threat to industrial and socio-economic development and those “BLIND” Ghanaians betrayed and despised him for few thousand US dollars.

Now, a look at Ghana’s recent history will show where we went wrong and why our economy is in such a terrible shape after the 1960s. These “Blind, Greedy” and disgruntled people who betrayed him thought they were doing harm only to Kwame Nkrumah, but forgot that they were doing it to their own children. I pray to God that those who betrayed him, “The stick that was used to hit Mr. Baah, that same stick will be used to hit Mr. Takyi”, one day.

This same story we hear from the German history. Hitler said “Let the blood flow on the Jews because they are a threat to our economy” He thought he was doing the Germans good. Today what do we see?. The German youth are paying heavily for the price of their ancestors “STUPIDITY”. Today Ghanaians are paying heavily for our ancestors ignorance, “STUPIDITY” and for their iniquity.

This “INDMNITY CLAUSE” has made it possible for the same Wolves to dress in “Sheep Skin” to seek their third fortune with their master Rawlings. They are now preparing themselves to finish Ghana once and for all. This is because there is no “MAN” in the system. They killed our leaders living only children behind. We are all witness of Osagyefo Dr. Kwame Nkrumah’s political and economic policies that seem to illustrate that the negative propaganda that was unleashed following his overthrow in 1966 has had a damaging effect on the direction of industrial development in our country.

In fact, this negative propaganda has reached a point that even young highly educated men and women growing up today do not know the real facts about what our first Prime Minister and later President was about. These men and women shouted crucify him. They shouted: Nkrumah “Yaa saa ta”, (in Hausa language), meaning “Nkrumah has stolen, Nkrumah is driving us into communism. Do away with him and every body enjoyed his crucifixion whiles nefarious Pastors shouted HELLELUYA.

I quite remember Nkrumah saying. “They have turned the clock 20 years back” 35 years is exactly gone and Ghana is HIPC. Those countries we started with are 35 years far ahead of us. Ghanaians thought they were too intelligent.

One of these newly dressed in Sheep Skin is said to be Dr. Kwesi Botchwey former Minister of Finance and Economic Planning, who could achieved nothing for Ghana, but rather led the country to be crowned with the name “DR. HIPC”, stated categorically in an interview on the 10. October 2002, that: “he is a card bearing and paid up member of the NDC and that he was prepared to unify, strengthen and help democratise the party in his bid to contest the 2004 presidential elections.

He said his decision to contest the presidential slot was in response to numerous calls from the “Blind and Stupid” party supporters who felt that he was the right person to lead it in the 2004 elections”, he added. He said, "I am aware of the many challenges that face our nation and I think as a man of vast experience, I am the right person to offer this service," he said.

He gave the assurance that he had come to bring his experience and expertise to bear on the country's socio-economic and political development. He says he can see clearly now. The Blind Kwesi Botchwey´s eyes are now opened to see how Stupid and ignorant Ghanaians were 20 years ago, and as such ready to come back to sell the rest of the nation again because in Ghana we now find Children and Women without any fore-sight. Yes, where are the so-called Ghanaian “Intellectuals” they are all “Sleeping like sleeping Giants”. Yes, Ghana has only produced “Book-laws”.

Leaders of CPP, NPP and other opposition parties beating about the “BUSH” because they too are Blind to see what these PNDC/NDC have done to our economy and our democracy. They are just afraid to tell our Sleeping and poor Ghanaians the truth.

Is Dr. Botchwey who was then blind under Rwalings regime really aware that the past criticisms that were levelled on Nkrumahs industrial, socio-economic and political planning policy by NLC, N.L.M, U.P (United Party) and the latest his party PNDC accusing Nkrumahs government of corruption, totalitarianism, destructiveness and inefficiency, were false accusations?

Which of these bad policies of Kwame Nkrumah has he and Rawlings been able to ratify after 20 years in government? What can Dr. Botchwe the so-called economic specialist do for Ghanaians? What about those who studied economics in Ghana Universities with him has got to say about his second coming?. Don’t we have any intelligent economist in the country? Where are those economist that were educated with the taxpayers money?.

Don’t we have MEN with WISDOM and better ambitions in Ghana today, who can prevent these nefarious men from leading the country again for the third time?.

It is really a “PITY” to see Ghanaians intellectuals sleeping like a “SLEEPING GIANT”. A nation despite its potentials, cannot envisage the danger ahead when these “WOLVES in SHEEP” dresses strikes again. It seems to me that Ghanaians were educated only for speaking and writing English but for Wisdom, creativity and political awareness were meant for others in another planet. When shall we have eyes to see, and when shall we have ears to hear?.

The Wolfs: Dr. Botchwey, Rawlings, Dr. Obed Asamoah, Professor J.E.A. Mills and their accomplices are on their way coming and as usual, innocent Ghanaians will once again shout the famous slogan, “ LET THE BLOOD FLOW” and it will definitely flow on our Stupid leaders heads for the third time.

I think we “BLIND” Ghanaians, should allow these “WOLVES” in for the third time to finish the rest of the national “CAKE”, as testimony of our “FOOLISH, IGNORANT, IRRISPONSIBILITY”. “Father have mercy on Ghanaians”. Prince Aidoo Ghana Social Democrats Germany