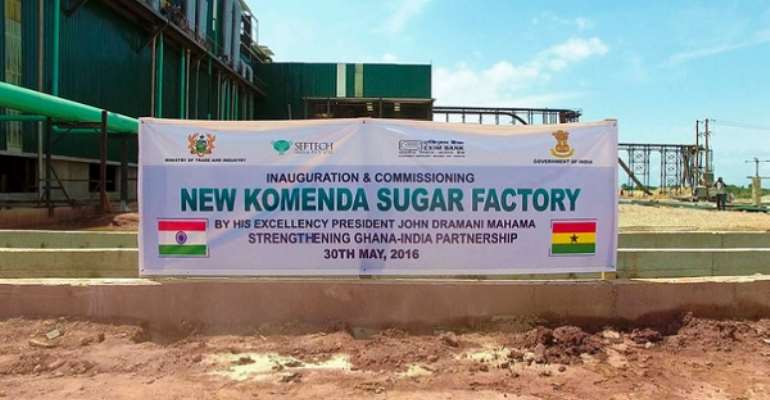 A group calling itself the Concerned Citizens of the Komenda Traditional Area is sceptical about the Minister for Trade and Industry, Alan Kyerematen's promise to ensure the operationalization of the Komenda Sugar Factory before the end of 2021.

Convenor of the Group, Samuel Awudzah said he is not optimistic that the factory will be operationalized anytime soon, as government had failed to fulfil similar promises in the past.

“We’ve heard this before. We do not believe the mere rhetoric coming from him [Alan Kyerematen]. The only thing that will make us believe him is when the factory is actually working,” Mr. Awudzah said on Eyewitness News.

Giving a vivid picture of the state of the Komenda Sugar Factory, Mr. Awudzah said: “you cannot see the silver colour of the building again. It has turned brown. The place is weedy, and it is just recently that they cleared the weeds.”

“The factory has been closed down for five years without any maintenance,” he added.

The Komenda Sugar Factory which was inaugurated in May 2016 by then-President John Mahama was built at a cost of $35 million from an Indian EXIM Bank facility.

It was estimated that the factory could employ 7,300 people along the value chain, boosting employment prospects in Komenda-Edina-Eguafo-Abirem municipality.

But the factory has developed a reputation as a white elephant after not being fully operational for the past five years.

In June 2020, the government said the ban on foreign travel due to the COVID-19 pandemic affected the processes of reviving the Komenda Sugar Factory.

In June 2019, Cabinet approved Park Agrotech as the strategic investor to revive the factory after a technical audit by Price Waterhouse Coopers.

Park Agrotech was named as the strategic investor in the project, with a financial commitment of US$28 million.

“I have instructed the transaction advisor to ensure that the condition precedent to the concession agreement and the roadmap for the opening of the factory is finalized by the end of August 2021 to enable operational activities at the factory to commence before the end of the year,” Alan Kyerematen to Parliament on July 22, 2021.