Presidential Spouses: Something Small for the First Lady is Good.

By Selassie A. Rich
Feature Article 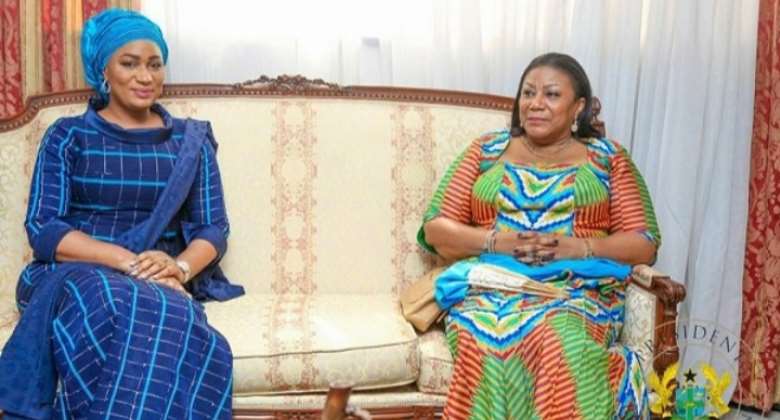 All work and no pay make the first lady a dull “lady”. Permit me to take a glass of water before I proceed. In fact, a few friends contacted me to seek my view on the issue whether first and second ladies should be paid by the state.

The role of the first lady became no longer just a matter of casual discussion, but a hotly and daily debated national issue. The constitutionality of federal statutes, such as Article 71 (1) and (2) of the 1992 constitution, the efficacy of conflict-of-interest laws and, the political legitimacy of a Flagstaff House, may all be dependent on the answer to a single question: Is the first lady an officer or employee of the government? Clearly, these debates are coming up because of the legal problems created by a first lady with an undefined role. Regardless of how one looks at it, first ladies are not employees or officers of government, de facto or otherwise. Accordingly, no legal roles exist for them. First and second ladies are therefore private citizens in the eyes of the law.

Nevertheless, considering our first ladies’ unfettered access to our presidents over the period makes it clear that they have some degree of influence. In fact, they are the first assistants to the president. Their inputs into our national development is notable. You may choose to be emotional about it, but the truth is our nation's history is replete with examples of first ladies whose activities far exceeded conducting state dinners. Considering the many initiatives and their attendant economic benefits to the nation by most of our first ladies from Konadu Agyeman Rawlings through to our beautiful Rebecca. In case you pretend to forget about their works let me help you to remember just a few. Rebecca Akufo-Addo has been instrumental in mobilizing resources to build critical healthcare facilities across the country. The witches of Gambaga are eternally grateful to Lordina Mahama for coming to their aid with a witch camp. The 31st Women Movement by Konadu influenced an inclusive educational agenda in the rural areas and urban slums and championed the opportunity of many women in rural Ghana to access microloans to work with. The list goes on and on.

Granted that presidential aides are paid by the state because they support the president in discharging his duties then it is very reasonable to consider formalizing the salary of the spouses of the president and his vice because they are the ultimate assistants. The lack of recognition by the 1992 constitution of the roles of first and second ladies itself is an evidence of gaps in our laws which ought to be amended.