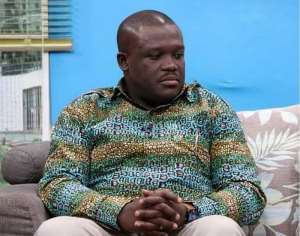 It is common knowledge that Parliament’s basic function is law making. Nevertheless, several functions are incidental to the performance of this function. Among others, representation is visibly identified as a key function performed by Members of Parliament (MPs). Parliamentary instruments such as question time, statements, motions, debate on policy, among others presents an opportunity for MPs to draw attention of some challenges in their constituencies and explore avenues for socio-economic development. Sadly, this is what has eluded the talkative Sam George who rather have a rare proclivity for a lot of empty noise. I find it strange how a lawless man like George find himself in the chamber of law. Talkative Sam George is continually seen at the center of every pandemonium. No wonder the talkative “onukpa” has received some very memorable slaps and beatings so far.

Last night, a friend told me in Afienya that “things are falling apart in Ningo-Prampram now and the center self no dey hold”. The past four years has witnessed the worse form of underdevelopment which is largely attributed to the bad posture of the talkative Sam George! This MP has disrespected everybody in this country; the president, clergy, colleague MPs, security personnel just name it. This behavioral defect of disrespect and empty pride is alien to the ordinary Ningo-Prampram native. The talkative MP finds joy in the convenient excuse that developmental projects are not his duty as MP anytime he is confronted to account for same. The truth is that the Sam George “dey talk plenty wey he no dey see top”. I reminisce my personal encounter with him on one occasion when I humbly asked him to mention one high impact project he undertook or has lobbied to be undertaken for my people in Ningo-Prampram. To my utter amazement, he said without indignity that he was not the chief agent of development. That day he dissed me “waaa wey I feel”. Well, this talkative is seen to have insulted everybody so “whom am I?” in chairman tone I asked myself. Sam George made a statement on national television which seeks to suggest that ensuring maintenance of roads is not his duty. Yet as part of his campaign promise, he assured my people of Ningo-Prampram that he will construct the road stretch between Afienya and Dahwenya. How could a man who distant himself from lobbying for the development of the constituency make this happen? Believe me, the social capital of “onukpa” Sam George is near zero with no luster. Especially, when it comes to lobbying for Ningo-Prampram. That is why I know this promise will not see the light of day.

Prior to the 2020 general elections, some of the things this never-do-well talkative MP mentioned as his achievements provoked a lot of laughter. How on earth could an achieving MP give GHc 1000 to NDC constituency women organizer and state it as one of his achievements? Whiles in other jurisdictions MPs are seen to be doing fantastic jobs. You get excited and “wowed” when you walk through the social media handles of some MPs even opposition MPs like Hon. Samuel Okudjeto.

His plenty talks on radio and TV yielded near to zero dividend for the constituency. The talkative “onukpa” has been very irresponsible in handling issues that fall within the ambit of interest of Ningo-Prampram constituency. From poverty, child labor, unemployment, gross insecurity, lack of portable water, poor infrastructure, health to the tumbled educational standards I can tell you the voluble MP scored zero. There are many who are waking up from their slumber that speaking grammar on radio does not connote competence.

In my view, Ningo-Prampram is agonizing the crisis of good representation that could bring any phenomenal project by way of lobbying. As it appears the MP has abdicated his role to lobby. Currently, we have an emasculated white elephant with no market value. He only prides in vain talks as though speaking grammar from one media house to the other equals good representation. Empty grammar is certainly not competence.