‘My uncle didn’t kill my father; release him’ – Kaaka’s daughter to police 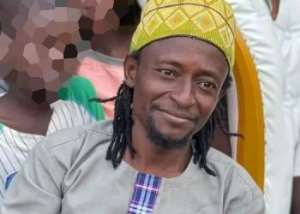 Munawara Ibrahim, daughter of Ibrahim Mohammed, alias Kaaka who died after being beaten to a pulp, believes her Uncle, Iddris (Iddi) Muhammed, who has been arrested in connection with her father’s death is innocent.

Kaaka left behind a wife and children.

The bereaved relatives of Kaaka and the two others who were killed by soldiers during a protest over his death in Ejura, were agitated soon after the Vice President and the National Chief Imam left the family house after going there to commiserate with them on Friday, July 2, 2021.

Speaking to Citi News after the visit, Kaaka’s daughter, Munawara Ibrahim, pleaded with the government to intervene and release her Uncle, because in her view and without any sound evidence, he was “innocent”.

“He is not the one who killed my father. He is not capable of doing such a thing. I can swear to that. I am really hurt. The real culprits are walking around freely while my innocent uncle is in police custody.”

“I am pleading with the government to release my uncle.”

Iddris Muhammed was the third suspect to be arrest after two other suspects, Issaka Ibrahim and Fuseni Alhassan were picked up.

Police have so far not given details about his connection to his brother’s death.

They were slapped with two charges; conspiracy to commit crime and murder.

During the court proceedings, the prosecutor, Chief Supt. Kofi Blagodzi, prayed the court to remand them into police custody to allow them to conduct a thorough investigation into the matter Background

Ibrahim Muhammed, died on Monday, June 28, 2021, after he was attacked by unknown assailants when he was returning home on his motorbike on Sunday at Ejura in the Sekyedumase District in the Ashanti Region.

It is alleged that he was attacked and killed because of his social activism, which some felt was making the government unpopular.

This is because the 45-year-old was noted to be vocal on both local and national issues using his Facebook page.

His family said he had faced threats over his activism prior to the attack.

Following his burial, some residents of Ejura started a street protest, but were confronted by armed police and military personnel, leading to the death of two persons who were said to have been shot by some soldiers.

The police claim the protestors had become rowdy and were pelting the security personnel with stones.

A three member-committee has subsequently been constituted upon the instructions of the President to conduct a public enquiry into the incident and report to the presidency within ten days.