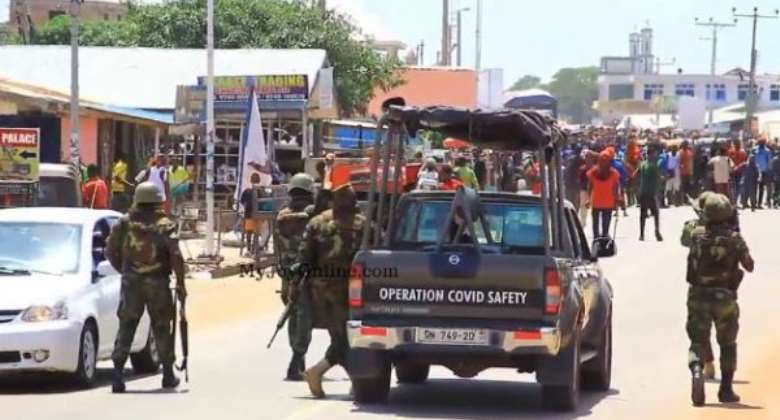 The Ejura District Police Commander, DSP Philip Hammond, said he had no hand in the military’s deployment to the area after protests over the killing of social activist Ibrahim Muhammed, alias Kaaka escalated.

Responding to questions posed to him by the members of the three-member ministerial committee probing the chaos in Ejura, DSP Hammond insisted that while he requested for backup when the protestors began to overwhelm his officers, there was no specific call for military deployment.

“I called for reinforcement, and my Divisional Commander assured me that a reinforcement team would be brought. The team that came comprised of soldiers and police officers,” he told the committee.

He conceded to the committee that his team was not adequately resourced to deal with the situation, hence his request for reinforcement.

“Not all of [the police officers on the grounds] were armed. Under normal circumstances, not everyone is armed, only a few are,” he said.

“I requested, through my Divisional Commander, for backup and I knew very well that when he deployed personnel to augment my team, he would give them the needed logistics to come and support us.”

When asked whether he knew whether officers from the joint police and military taskforce, Operation Calm Life, had been deployed, DSP Hammond replied “no”.

“We were only informed that a military team had been deployed, and they would arrive there with a police team from the regional command. So where they came from, I cannot tell,” he added.

“We only requested for backup but in the wisdom of our authorities, maybe they felt they had to bring in more.”

The Ashanti Regional Minister, Simon Osei Mensah had earlier admitted that he requested a military deployment in the area during the chaos, in his capacity as the Chairman of the Regional Security Council.

He defended his decision, explaining that having learned that the youth had planned to attack the police station in Ejura, he believed military support was needed.

“I called on the military, as the Chairman of the Regional Security Council (REGSEC), to be a backup a day before the incident. I did that based on intelligence I gathered that the youth had planned to go and burn the police station in the town and the homes of the two suspects the police have arrested after the burial of Kaaka.”

“It is very unfortunate what happened, but this isn't the first time the military has been called upon to assist the police. It is a strategy I have used since 2017.”

Although the Minister faced some criticism for his unilateral call, the General Officer Commanding of the Central Command, Brigadier General Joseph Aphour said the decision was timely.

“But if not for what we did together with the police in Ejura, I can bet you that there would have been more deaths to civilians. I believe the judgement he [the Regional Minister] gave by inviting us to intervene was the right one,” he told the Committee.

The killing of Ibrahim Muhammed, alias Kaaka, in June incited protests from the youth in the area.

Two others were killed after the military, called in when the protests escalated, opened fire on residents.

The deaths and the military’s approach have been widely criticised, leading to the President, Nana Akufo Addo ordering the Interior Minister, Ambrose Dery to undertake a public enquiry into the incident.

Mr Dery subsequently set up the three-member committee, which held its second day of public hearings on Wednesday.