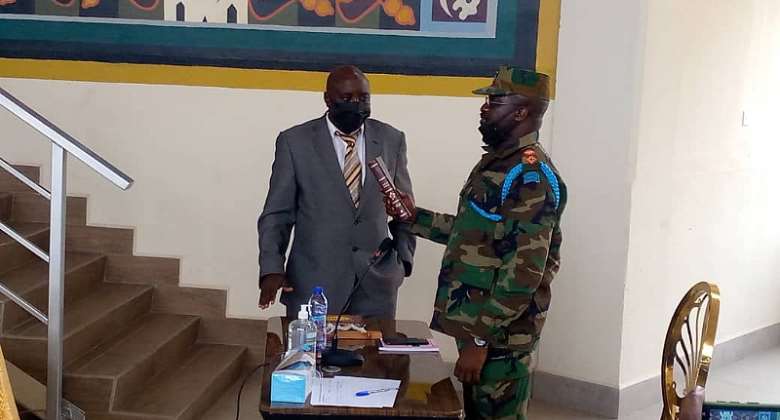 The Commanding Officer of the 4th Infantry Battalion, Lt. Col. Kwesi Ware Peprah, says he suspects some casualties of the disturbances at Ejura in the Ashanti Region may have been hit by gunshots from the protesting youth.

According to him, some protestors also fired shots during the disturbances.

The General Officer Commanding of the Central Command, Brigadier General Joseph Aphour, who appeared before the committee early on, had said the personnel were compelled to fire into the protestors after gunshots were fired from among them.

This was the first time such a claim has been made, as initial reports only suggested that the protestors pelted the security personnel with stones and had in their possession knives and machetes.

Giving his testimony before the 3-member committee set up to look into the development, the Commander of the 4B Infantry Battalion, Lt. Col. Kwesi Ware Peprah, said although some viral social media posts showed some soldiers kneeling and aiming their guns in the direction of the protestors, none of them shot directly at the protestors.

He added that the soldiers who were on operational duty at the scene did not intend to shoot to kill anyone.

“The aim was not to kill. It was just unfortunate. As a matter of fact, I even suspect that the weapon that fired from protestors might have hit one of them,” he said.

The military commander suggested that while a professional would understand that there were gunshots from weapons other than what was being used by the military, others may assume that all the gunshots heard at the scene were from the armed soldiers.

“Because the soldiers started firing into the air, if you are not a professional and there is another rifle firing, you wouldn't know, and that is why some people are saying that they [protestors] were not handling weapons… The ordinary civilian doesn't know. The media wouldn't know,” he added.

Two people died of gunshot wounds during a protest that turned bloody last week at Ejura.

The protestors, mostly youth, were returning from the burial of a social activist, Ibrahim Mohammed, also known as Kaaka, who was killed by some unknown persons.

The protest turned violent as military and police officers tried to stop the protestors by firing shots and spraying water cannons on them.

The security officers justified their action by indicating that the protestors were wielding machetes, pelting stones and that some even fired shots, hence their response.