Bawumia Is Vice-President, Not an Ordinary Cabinet Appointee, Period! 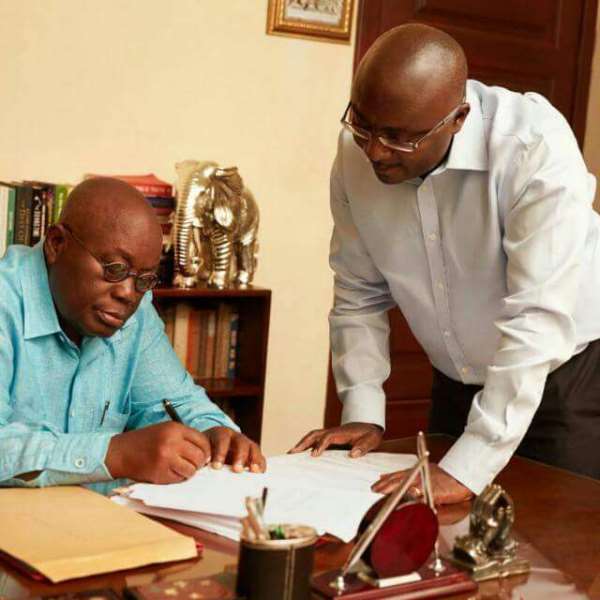 I just finished reading Mr. Haruna Nuako’s so-called Open Letter to President Akufo-Addo: Call Bawumia to Order and could not restrain myself from all the contempt that it unreservedly deserves (Modernghana.com 4/24/21). It is nauseatingly clear that the Kufuor-Kyerematen-Impiani Factionalists among the ranks of the membership of the ruling New Patriotic Party (NPP) are up their trademark dirty tricks, once more, in the leadup to the 2024 General Election. In 2008, it was not the creditable or relatively outstanding job performance of the John Agyekum-Kufuor Administration that witnessed the nomination of Nana Addo Dankwa Akufo-Addo as the Presidential Candidate of the New Patriotic Party. What makes Mr. Nuako’s intellectually insulting Open Letter to President Akufo-Addo even more sophistically flagitious is the fact that Nana Akufo-Addo had studiously and religiously followed all the rules that the letter writer would scandalously have Vice-President Mahamudu Bawumia equally subjected.

But guess what, Dear Reader? In the end, it was not party discipline that wickedly ensured that the Presidency of Nana Addo Dankwa Akufo-Addo would be deliberately delayed for another 8 years. Truth be told: It was the relentless and reckless determination by the Kufuor Cabal that ensured that it would be the three-time Presidential Candidate of the National Democratic Congress and former Vice-President John Evans Atta-Mills, of the Swedru Declaration infamy, who would succeed Mr. Agyekum-Kufuor to the Presidency. The latter, in a classical nose-thumbing fashion, would gleefully and personally conduct the newly elected President Atta-Mills through the Indian-government funded newly constructed Jubilee-Flagstaff, as our Presidential Palace was tentatively known at the time. With just 4 months before the 2008 Presidential Election, Mr. Alan John Kwadwo Kyerematen, staunchly backed by a lame-duck President John Agyekum-Kufuor, to the great horror and chagrin of Mr. BJ Da Rocha, late, the venerable first National Chairman of the New Patriotic Party, would helplessly look on, as a near-certain victory eluded Candidate Addo Dankwa Akufo-Addo.

And why, Dear Reader? You deserve to ask: All because, in the ethno-chauvinist and supremacist trend of thinking of the Kumasi Mafia, some preferred the more emotionally and politically loaded and volatile categorization of Asante Mafia, “The Little Man from Kyebi” needed to be prevented from acceding to the Presidency of the Sovereign Democratic Republic of Ghana at all costs or by hook or crook. Which was why I simply could not help but snort at this cheap, tawdry and devious attempt by the Kumasi Boys, my most preferred terminology, to luridly and regressively take us back to those bad, old days when the veritable nation-wrecking political scam-artists among the ranks of the New Patriotic Party were more fervidly focused on effectively eviscerating the presidential ambitions of the dauphin of the immortalized President Edward Akufo-Addo than the long-term interests of our beloved nation at large.

You see, cynical party hacks like Mr. Haruna Nuako, who would cavalierly have Vice-President Alhaji Bawumia effectively and definitively reduced to the pedestrian status of just another ordinary member of the ruling New Patriotic Party, conveniently forget that it was only President Akufo-Addo and Vice-President Bawumia who stood for a nationwide election in both 2016 and 2020 and, of course, had done so and have been doing so since 2008, when the “pragmatic” likes of Mr. PC Appiah-Ofori were hermetically convinced that it was criminally inadvisable for Candidate Akufo-Addo to have selected an unwinnable candidate virtually all of whose relatives and family members were bona fide card-carrying members and operatives of the National Democratic Congress, including Dr. Bawumia’s own birth or biological mother.

Already, the Vice-President has issued a statement emphatically noting that neither he nor his office has authorized any individual or group of individuals to wear T-shirts and other party paraphernalia and insignia with his image imprinted on them and go canvasing for his Presidential Candidacy in the leadup to the 2024 General Election, which he has neither personally declared nor have the executive operatives at the Kokomlemle Headquarters of the New Patriotic Party declared by way of opening up the season for individual aspirants to declare and launch their electioneering campaigns. Well, for the information of Mr. Haruna Nuako and all those rabidly anti-Akufo-Addo factionalists among the membership ranks of the NPP, the aforesaid media release is about the extent or as far as Vice-President Bawumia would be prevailed upon to go.

You see, we live in a constitutional democracy with free-speech rights and free-expression guarantees granted to each and every individual citizen. And absolutely nobody should or will be allowed to push Vice-President Bawumia around like a Kumasi-Kejetia head porter.

Greening Ghana Project fits into our 30% greening project — ...
1 minute ago