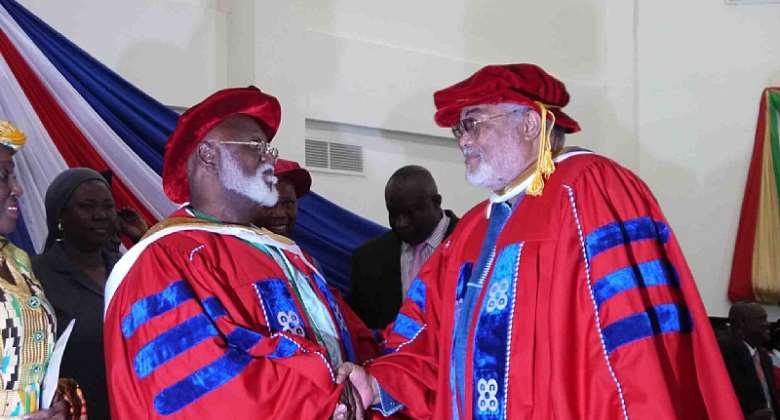 Comrades, when the death of the former President, H.E. Flt. Lt. (Rtd) Jerry John Rawlings, was announced to us on Thursday, 12 November 2020, there struck a deep and solemn note in our lives which has resounded far and wide. Our hearts are broken, sorrow has filled our hearts, sorrow that is deep and worrisome.

Oh, how we would have wished it wasn’t true, but wishes are not horses, and truly, truly our Founding Father has left us. Although it is appointed for a man to die we did not think it could be this soon.

A week has gone by but we still cannot bring ourselves to accept the fact that he is gone. No words can describe the emptiness with his gone. We pray for strength for this difficult time and for these difficult moments. We pray for strength and guidance for his wife, his children, and his families. Our lives are empty in many areas that he had so brightened. His death has shocked many lands, and made countless millions of Ghanaians pause and look around them.

A new sense of values for the time being took possession of human minds and mortal existence presented itself to so many at the same moment in its serenity and sorrow, in its splendour and in its pain, in its fortitude, and in its suffering. His Excellency Jerry John Rawlings was greatly loved by all people. He was respected as a man and as a leader far beyond the many realms over which he reigned.

We cannot think of Flight Lieutenant Rawlings today only in terms of soldier, orator or president. He was all these, and more, he was a renaissance man, a Winston Churchill of our time. Flight Lieutenant Rawlings will be borne to his grave as the deliverer of this nation, and of all to whom freedom of life was precious. This is the honour bestowed upon him for his part in the history of Ghana’s Fourth Republic. To most of us, he is the Father of Modern-Day Democracy of Ghana.

His words, probity, accountability and transparency, carried such force that they became deeds in themselves. They are the hallmark of our political philosophy and values underpinning NDC fraternity in good governance. His deeds in the service of freedom can never be forgotten. No one can question his incomparable achievement; that he provided exactly the right kind of leadership at exactly the moment when it was most desperately needed in Ghana. Generations still unborn will hear and read of this legendary Ghanaian who was an orator, a soldier and a charismatic leader.

The simple dignity of his life, his manly virtue, his sense of duty, his example as husband and father in his own family circle, his courage to lead a nation without fear, are titles of a great man and a leader in our time. It is at this time that our compassion and sympathy go out to his consort and widow. Their marriage was a love match with grandeur and splendour, a pure love. May she be granted strength to bear her sorrow. Our heartfelt condolences and sympathy go out to his children and his entire family; may God guide them during these challenging times. Our sympathy also goes to our great party, the National Democratic Congress, and all Ghanaians.

It is our hope that our great party, NDC, will win the 7th December General Election and we know he will cheer and smile wherever he is.

We pray that God will keep him safe in His bosom and grant his departed soul eternal rest.