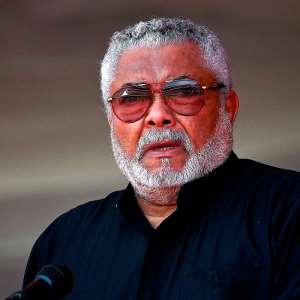 The Upper East Regional Secretary of the biggest opposition party Mr Donatus Akamugri has said the late former President Jerry John Rawlings must not be buried until the party he founded, the National Democratic Congress (NDC), comes to power again.

At a vigil in honour of the late military leader in Bolgatanga, Mr Akamugri said: “Rawlings must be buried when we are in power”.

According to him, “if he had wanted to be buried, then he should have been called to eternity before the period of elections”, however, “We had three weeks to elections when he died, so, his soul will not rest in peace if we have to bury him when an election is just around”.

“And he was eager to cast his vote for his party and once he has passed away and the election has not been done, we believe that he wants us to win election and bury him.

“Left with us, if we don’t win the election, Rawlings is supposed to be kept until NDC comes back to power and, then, we will bury him”, he told the audience at the vigil.

“And surely”, he added: “This election, we will win it because, with the spirit of Rawlings, with the way he has contributed to this country and the people seeing what he has done and even his opponents now calling him an angel, they would do him an honour for his party to come back to power and then bury him”.

“So, we are calling on everybody in this country, including our party members and those who are giving tributes to Rawlings as a good person, to give him the best tribute by making sure that the NDC wins the election and, then, his party will be in power and bury him. That is when he will go to his Maker without any hindrance or hurt in him,” Mr Akamugri said.

Mr Rawlings passed away on Thursday, 12 November 2020 while on admission at the Korle Bu Teaching Hospital.