'NDC Should March For Akonfem, Airbus Scandals Not Rawlings Probity And Accountability — Bawumia 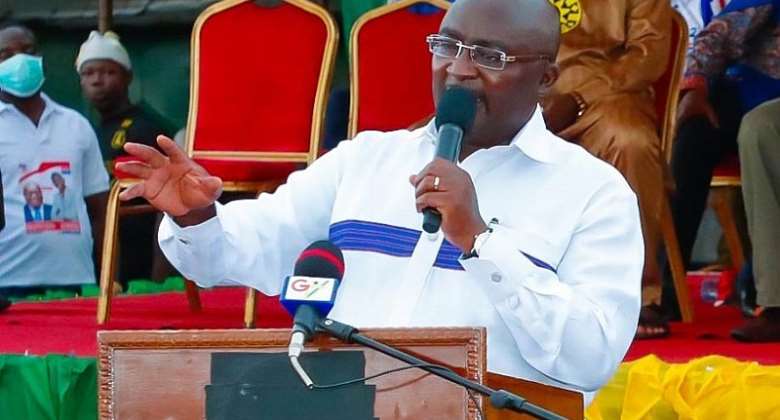 Instead of “hypocritically and dishonestly” marching for probity and accountability in honour of the late former President Jerry John Rawlings, the main opposition National Democratic Congress (NDC) should be marching for the SADA guinea fowl, bus branding and Airbus bribery scandals, Vice-President Dr Mahamudu Bawumia has said.

Dr Bawumia told supporters of the governing New Patriotic Party (NPP) at the auditorium of the Yendi Senior High School in Yendi, Northern Region, on Saturday, 21 November 2020 that for a party that “disrespected” its own founder while he was alive, he found it “dishonest” for the NDC to profess the values of Mr Rawlings now that he is no more.

“Today, after the death of the former President, may his soul rest in peace, Jerry John Rawlings, they are now there saying they are marching in his honour for probity and accountability.

“Where was the probity and accountability when they were chopping the SADA money?

In his view, the NDC is a party of hypocrites and dishonest people who denigrated their founder while he lived but are now marching for his values.

“When Jerry John Rawlings was alive, they [NDC] were not marching for probity and accountability; they were rather disrespecting him, they were calling him ‘barking dog’, ‘the Volta god’, isn’t that the case?

“They were disrespecting him, they got babies with sharp teeth to attack him; isn’t that the case? Today, now that he’s dead, they are saying they are marching for probity and accountability.

As part of activities to commemorate his passing, the NDC has been organising a series of activities such as vigils and marches in the late president’s memory.

The party’s General Secretary, Mr Johnson Asiedu Nketia, at a point, even accused President Nana Akufo-Addo and the government of attempting to “hijack” the funeral of the late military leader.