Jerry Rawlings: One Great Lesson In Life And Death 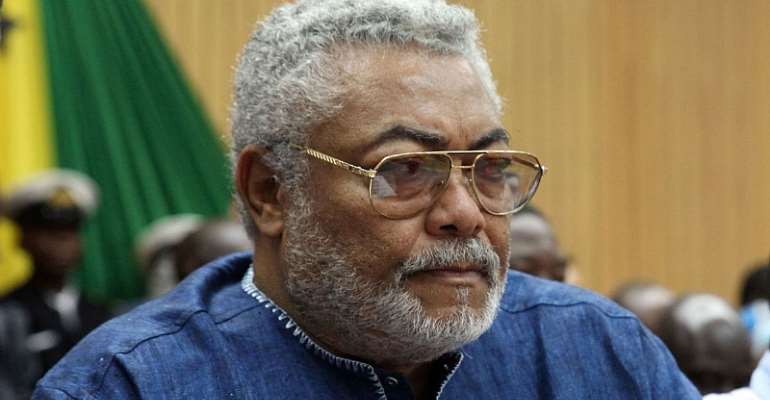 There are some who have suggested that every man who dies should rest in peace. However, great things are often not done in Peace alone but through Fire and War! I explain some of these more in my book “Life is War: A Letter to Nephews and Nieces and Loved Ones Behind” (2017).

Those who put their lives on the line for a cause they believe in, right or wrong, become heroes, and leave a mark!

Jerry Rawlings spoke of and stood up and risked his life for what he sensed as SOCIAL INJUSTICE in Ghana in the 1970s.

We all know he failed to accomplish the said objectives or vision of a more equal and just Ghana for the rich and the poor! No, he failed,, but at least he risked his life trying and for that his name remains in history.

Let’s look in the mirror!

Do we all have the courage to stand up when Ghana is being sold to foreigners and burdened with so much debt as loans?

Do local leaders and elders stand up when they see Chinese surface gold miners ruining our rivers and environment? Do elders in our Political Parties care and stand up when so much money is being borrowed with no payback plan, passing the burden to future generations?

Do our Economists and educated elites give warning when our government leaders are damaging our economy through excessive borrowing while selling our mineral and natural resources to foreigners in exchange!

Do we think of the future for those behind us?

When are we going to have equal courage to stand up for the correct moral and ethical standards and punish crimes in our nation!

When are we going to vote for an individual we believe can do the job and not for a Party of our parents, our family or tribe!

Jerry Rawlings has lived and died and left a name. Some of you felt he was special and worshipped him. Others perhaps hated him. But think about it. Was his life Some 39 years ago worth risking for what he believed in?

Some of you are given jobs and paid to serve the Public- and you cut corners when the boss is not looking and will take that brown envelopes just to make an appointment!

- Some of you see ethical impropriety and laws being broken and do not report!

- Some of you hide the land documents expecting that envelope or lunch money.

- Some of you refuse to show the boss the angry calls and hide wrongdoing and say nothing!

- Some of you men will ask a young woman to bed before signing that opportunity for promotion or even employing them!

- Some of you will criticise but when offered that 4x4 Vehicle as reward for signing the contract you know favours the foreigner and against Ghana, you never hesitate!

- Some of you will shed tears and say you were friends, but when asked to offer advise you could not tell Jerry Rawlings to wait in 1981 to form his own political Party but instead cheered on for him to commit treason and overthrow a legitimate Government of Dr. Hilla Limann.

It does not matter under the Laws of Karma whether he was ever tried for treason or not.

It does not matter whether any of the people killed without trial under the rule of Jerry Rawlings will be in Heaven or Hell.

What matters now is what Ghana we will leave behind as Jerry Rawlings is leaving behind. We all know it takes about 58,000 cedis to buy one dollar of food that used to cost about 3 cedis in 1981.

Are we better today than in 1981 before Jerry Rawlings?

A man I met on our GLU forum 20 years ago, now a Professor, recounts how his life changed around 1982-84 in high school from the revolution of Jerry Rawlings. Well,, others saw the reverse in their Businesses and fortunes.

Some lost their jobs and fortune and others gained from seized properties!

- Import duties on vehicles and what the PNDC’s Dr. Kwesi Botchwey called “super-sales tax” affected others, while some in Government gained through enhanced Colonial benefits such as travel per diems, sitting allowances, Housing and car allowances without limits. Some of the latter benefits amounted to vehicles selling at Ghs 685,000, and annual benefits in excess of their salaries that can exceed $300,000 or Ghs 1.7 million per year!

The bottom line in life is how our lives affect those of others.

As you look in the mirror, how was your life affected by the life of Jerry Rawlings?

May he face his maker all prepared.

The author has 115 publications published on Modern Ghana.

The 1986 Nobistor Affair meant to overthrow the Rawlings-led...
35 minutes ago