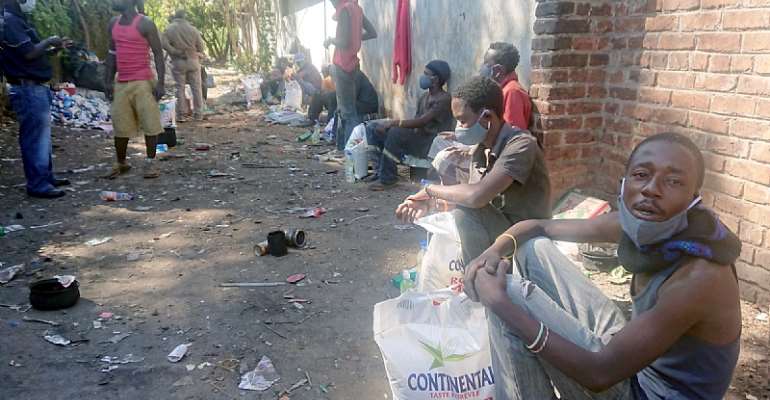 A group in the secret alleyway after a distribution of reusable masks, hand sanitiser and mealie meal. - Source: Ralph/Growing up on the Streets

The lockdown imposed to curb the spread of the new coronavirus, has had drastic effects on children and young people who live on the streets of many African cities. Their lives, even in “normal” times, are marked by ongoing hardship and tenacity.

We work on a project called “Growing up on the Streets” in three African cities: Accra, Ghana; Bukavu, in the Democratic Republic of Congo and Harare, Zimbabwe. The aim is to provide insights into their daily lives – and their struggles and coping strategies – so that policies can be better informed and, ultimately, transform their lives.

In Harare, these young people are spread across the city, sharing space in alleyways, market places, low-income settlements, or on wasteland. Precise numbers are difficult to determine , but in Harare alone across three years of Growing up on the Streets, 246 street children and youth have been involved.

We wanted to see how they're coping under Harare's COVID-19 lockdown.

On March 30, 2020, the Zimbabwean government announced a lockdown for 21 days to curb the spread of the virus. Most shops were closed and informal trading was banned, roadblocks were placed outside central Harare. This lockdown was extended indefinitely in May and a national curfew is still in place.

The lockdown measures were inevitably going to impact on these young people, and so in June we asked them to participate in creating a “story map” titled “In the Shadow of a Pandemic: Harare's Street Youth Experience COVID-19”.

Story maps are maps with text, images, and multimedia content. They're a powerful story-telling tool.

Through their story map , we saw how the lockdown appears to have been imposed with little thought of how the poor majority would survive – 63% of Zimbabweans live below the poverty line. Street children and youth are among the most deprived; their lack of identity documents and an address excludes them from access to what safety nets exist , for example in the form of welfare or social protection programmes, which almost always target households.

Measures moving forward must take their struggle to survive into account.

Eyes on the ground

We worked with local NGO Street Empowerment Trust who facilitated all the work on the ground. The project involved 24 young people, six of whom captured their stories through photographs, short films or sound recordings using borrowed phones.

The young people highlighted how they avoided arrest, found food and supported themselves when the informal economy was shut down.

Prior to lockdown in late March, street children between the ages of 10 and 16 were rounded up and placed in children's homes. The aim was to remove young people from the city centre, designated a high-risk area for COVID-19 transmission.

Roundups have been used by the authorities in the past. While intended as a protection measure, many ran away due to previous experiences of confinement – residential care facilities often lack the bare minimum of basic services.

Aside from the fear of roundups, is the fear of arrest – for loitering, moving without a pass letter from an employer, or a mask. Both involuntary confinement in care centres or police detention deprives young people of their liberty, earnings, friends and networks of support. If arrested in their shelters or on the move, young people report that their only means of escape is to pay a bribe.

Read more: How South Africa, Kenya and Zimbabwe measure up on child offenders

Carrying out their work is one reason they might be arrested. Work in the informal sector – for example picking plastics for recycling – is a main source of income for young street people. One kilo earns them about US$0.0035 (ZWD$1.30 in Zimbabwean bond notes). But restrictions of movement meant they couldn't search for plastics and food, often found in bins.

The loss of income has had many impacts, for instance on relationships. Mai Future (20) was on the street where she met her boyfriend and fell pregnant with their first child. They moved in together in a low-income settlement on the outskirts of Harare. But, with the COVID-19 lockdown, her boyfriend found it difficult to earn money to pay the rent and look after the family, so he abandoned her and their child.

Drastically reduced incomes also increase their risk of contracting the virus. Street children and youth cannot afford to buy single-use masks for daily use, sold in pharmacies for about US$2 each – far more than most Zimbabweans would earn in a day.

It is a criminal offence to move outside the home without wearing a mask, punishable by a US$20 fine, or imprisonment, or both. So street youth use discarded masks, exposing themselves to the virus. Street children youth sometimes pick up and use discarded masks due to cost. Mathew/Growing up on the Streets

They also have difficulty keeping warm when sleeping at a social distance – lockdown occurred during the Zimbabwean winter. Denford explains how young men still share an alley way – but sleep at a social distance, unable to huddle together for warmth.

The story map reveals that like any part of society, street youth are both subject to and willing to conform to rules and conventions, in this case for their own and others' safety.

The story map will remain a tangible record of how young people living on the streets are surviving during the pandemic. It captures a moment in time, specific to a certain place, and yet tells a universal story of how this pandemic is hitting the poorest.

One example of this may be Blessing. When making the story map, young people were struggling to survive due to reasons of deprivation rather than COVID-19 infection. Blessing, one of our Growing up on the Streets participants, whom we have known since 2012, died unexpectedly at the end of March. His death is symbolic of the paucity of healthcare available to young homeless in Harare, and how this was exacerbated by lockdown.

The story map is dedicated to him.

Shaibu Chitsiku of Street Empowerment Trust, Harare, project managed the story map in Harare and was key to the writing of this article

By Lorraine van Blerk, Professor, University of Dundee And

More Article
ModernGhana Links
COVID-19 pandemic receives less public sensitization attention in a Ghanaian print media — IBNA research
A grass native to Africa could transform the continent's dairy yields. Here's how
We can't banish COVID-19. But we can end the pandemic with vaccinations
My findings about the sanitation conditions in Nigeria's Ile-Ife point to a bad situation
Informal workers in Senegal, Mali and Burkina Faso have been hit harder by COVID-19
Now is the time to sprint if we want to end hunger, achieve other SDGs
Effective community policing in Nigerian town could be a model for other places
Let’s Dream of an African Renaissance
Ensure Maximum Transparency In The Confirmation Of Metropolitan, Municipal, District Chief Executive Nominees
TOP STORIES