Voter Registration: EC Vows To Prosecute Anyone Who Guarantee For More Than 10 People 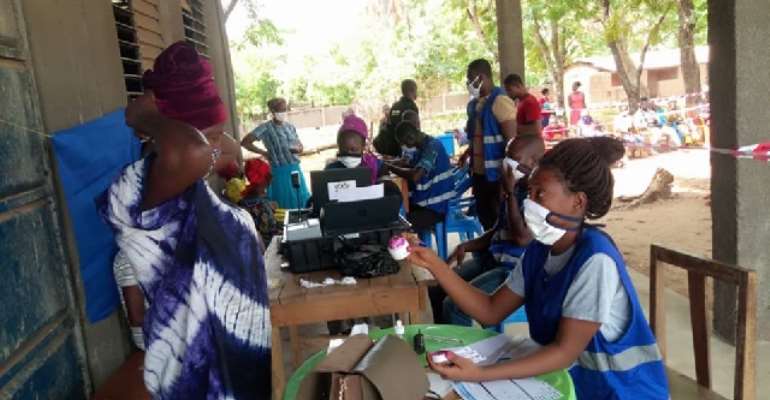 The Electoral Commission (EC) has said it is an electoral offence for a registered person to guarantee for more than 10 applicants, adding that persons found guilty of the act shall be prosecuted.

This follows the circulation of an audio on social media by a gentleman identified as McKenzie purporting to be an expert at forensics and biometric information cautioning the public against guaranteeing for up to 10 persons as this will lead to their being disenfranchised during the 7 December 2020 polls.

According to McKenzie, the system will fail to verify such persons.

He also alleged that the EC’s system is based on “algorithm mathematics.”

The EC began registering voters on Tuesday, 30 June 2020 across the country.

To qualify to register, applicants must show proof of citizenship by providing either a Ghana card or a Ghanaian passport only.

However, in the absence of these two documents, an individual can have two persons who are already registered to vouch and guarantee for them to enable them to register.

The EC, in a statement signed by its Acting Director of Public Affairs, Sylvia Annor, on Wednesday, 1 July 2020, noted that: “The said post by a gentleman who introduced himself as McKenzie is false and should be completely disregarded.”

It, however, stated that: “It is an electoral offence for an individual to guarantee for more than 10 applicants.”

The EC also indicated that its system is “capable of picking guarantors who guarantee for more than 10 applicants” and cautioned the general public that “anyone found to have done this will be prosecuted according to the law.”

The EC further revealed that the “system in place is not based on 'algorithm mathematics' as it is being alleged nor does the system have a vault called “Non-Verifiable Names.”

According to the EC, “these terms are alien and completely unknown” to the Commission.

The EC further urged the public to “refer to its news and information portal for credible information regarding the registration process” and also entreated all to be “circumspect and assist the Electoral Commission to deliver a credible register by being vigilant and ensuring that fake news is not spread.”

Mahama Installed As Development Chief Of Apesika
12 hours ago

New Voter Roll: EC Quickly Restored My Name After I Raised A...
12 hours ago