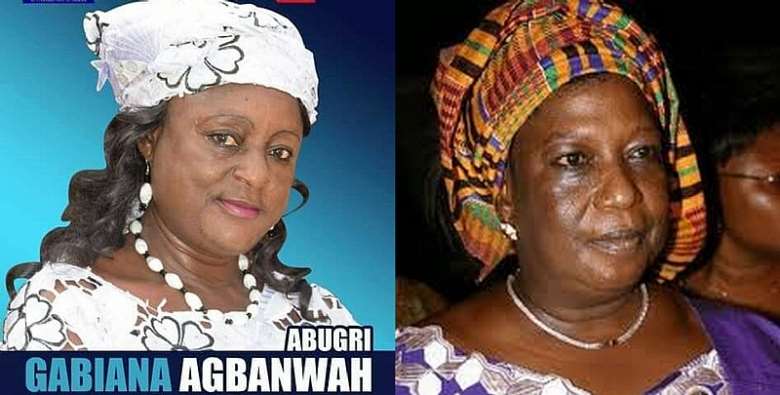 Women empowerment, leadership, and advocacy have over the decades suffered some setbacks. Socio- cultural factors have been derailing women's effort in their quest to contribute to nation-building visa vie quest to lead in a patriarchal society. One such constituency that for over three decades rewritten the story of women in political leadership and governance is the Bawku Central constituency. The Bawku Central constituency has produced two former female MPs whose track records remain unmatched since the return to constitutional democracy in 1992.

Late Hon. Hawa Yakubu affectionately called iron lady or Madam came to the scene as an independent candidate in 1992. She went ahead to win a fiercely contested election in 2000 on the ticket of the NPP, making her the first MP to win as an independent candidate and a party candidate. Madam Hawa Yakubu who became an ECOWAS MP and Minister of Tourism and Diaspora Relation has a sound credential in terms of developmental track records.

She has empowered 1000s of women in vocational training such as batik tire and dire, local soap making, weaving, and tailoring, etc. Late Hon. Hawa Yakubu has equally empowered a lot of young men and women to set up their businesses as well as become successful farmers.

In terms of education, Late Madam Hawa Yakubu raises the bar so high that, no MP within the Bawku enclave can match her socio-economic and political contributions. She ensures vulnerable households children school fees paid, networking for securing decent employment and respect for traditional authority was so enviable. Her contributions to health care, nutrition, social amenities including the provision of a potable water source, youth development remains unparalleled. Madam Hawa Yakubu's style of leadership and development approach was a selfless woman who cares for her people and does not border whether there is food on her table. Late Hawa Yakubu crossed the border to demonstrate her political prowess as she contributed to getting Africa's first female president Madam Elleson Johnson Sirleaf of Liberia elected into office.

Madam Hawa Yakubu was tipped by many commentators as possibly the first future female vice president or president of Ghana. Her untimely death marked a significant u-turn in the advancement of women in political leadership and women empowerment in Bawku and Ghana at large. She had good plans for the good people of Bawku, however, politics of greed, jealousy among others contributed to send a woman with a big heart to her maker.

The first NDC MP for Bawku since the fourth republic is Hon. Hajia Fati Seidu. She was elected into parliament in the 1996 general election. Although a onetime MP, Hon. Hajia Fati Seidu's name became a household one. She was an MP who cared so much for her constituents and demonstrated humanity, loyalty, and was much of a development character. She is credited for been the first person construct the Kariyama road using the share of the MPs common fund. As an educationist, Hajia Fati Seidu has equally paid her dues in providing access to education through the MPs common funds, women empowerment initiatives and just to mention but a few.

The dynasty of flourishing women's political leadership was broken by the most praised vibrant Harvard Trained Lawyer; in his early thirties who came to the scene in 2004 and had gone to become a three-time MP for Bawku central. He remains the incumbent and bidding for a fourth term to parliament. Let me stressed that, Hon. Mahama Ayariga ascending to the Bawku ‘political throne’ (Office of MP) was backed by a strategy of; we feeling, sense of belonging and continuous plea. He has been the most fortunate MP for Bawku central haven received endorsement from all who matter in Bawku. The big questions remain;

One will wonder why a promising and orator like Hon. Mahama Ayariga failed to cement his name in the historical records of Bawku central constituency, given that, he has the opportunity to learn more from the works of celebrated MPs in Hon. Hajia Fati Seidu and Late Hon Hawa Yakubu?

In an interesting dimension, the Bawku Central constituency has the opportunity to revisit the dynasty of women leadership. The opportunity is in this year’s (2020) upcoming general elections. The realities must be appreciated. We as constituents are fortunate to have a reincarnated Hawa Yakubu one of our finest MP in the race. For us in Bawku voting on traditional party lines must not be the game plan, rather the popular 'skirt and blows' as that is the only option to salvage our belonged constituents from a gang of looters and self-serving politicians led by our MP. From colorful looks in Our African prints to Excellent communication style; and flamboyant gesture to the captain of women empowerment; and youth development initiatives and provision of basic needs and social services to vulnerable constituents, Hon. Gabiana A. Abugri shares these accolades of Late Madam Hawa Yakubu. Even as a Parliamentary candidate, Hon. Gabiana's influence in empowering women through facilitating support for micro scheme loans, youth development, support to forfeiting school fees. Empowering farmers, connecting people, and creating varied opportunities. This is highly commendable. Remarkably, Hon. Gabiana has lobbied to secure over 15 boreholes from the Northern Development Authority (NDA) for the good people of Bawku of which Kpalwega community is a beneficiary. Supposing she gets the nod, can we imagine how prosperous Bawku Central constituency will be?

So fascinating, Bawku is a land of noblemen; from academia to politics; business to medicine; science to diplomacy, and so on. However, those men who present themselves over the past three decades, have been inferior and not a match to women's political leadership. An endorsement of women and electing her to parliament is just a confirmation that Bawku develops when a woman is at the lead in our affairs. We must all strive to reflect on the fact that, when a common man gains power he became self- centered and tried to suppressed and oppressed youth development in other to dominate. The best for a woman leadership is referenced from this philosophical quote ‘with two hands a woman caters for all the family’’ and that " if you educate a man, you educate an individual but when you educate a woman you educate a nation".