Quarter of a billion Africans at risk, as virus toll tops 300,000

By Susan Stumme, with Danny Kemp in The Hague and AFP bureaus
Africa 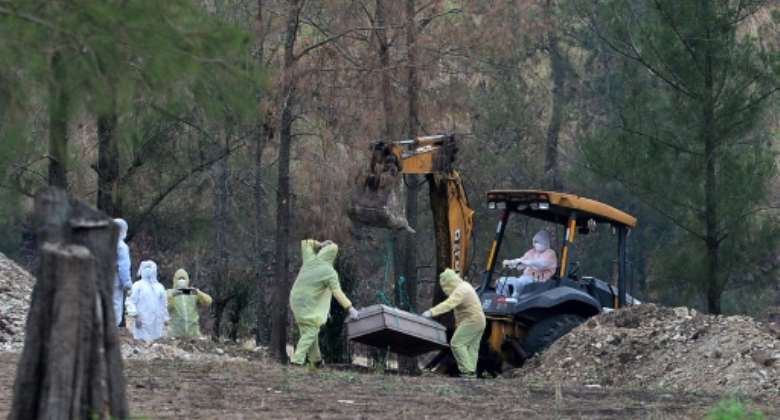 The coronavirus could infect a quarter of a billion Africans and put intolerable pressure on the continent's fragile health system, a new report said Friday, as the pandemic's global death toll topped 300,000.

Despite fears of a second wave of infections, borders began opening up in Europe and lockdowns continued to ease as governments try to get stalled economies moving again, with experts warning world output could shrink by 10 percent.

And Donald Trump ramped up his war of words with Beijing over responsibility for what he has dubbed the "Plague from China", threatening to cut ties between the two countries.

But it was the very human cost of the disease that was thrown into sharp relief with the discovery of infections in the world's biggest refugee camp, where upwards of a million Rohingya live in squalor.

"We are looking at the very real prospect that thousands of people may die from COVID-19" in these camps, Save The Children's Bangladesh health director Shamim Jahan said.

"There are no intensive care beds at this moment" in the camps at Cox's Bazaar, Jahan said.

Track and trace teams were fanning out Friday to follow up on two positive tests.

Epidemiologists have long warned that the virus could race through the cramped, sewage-soaked alleys of the camps, where the persecuted Muslim minority have lived since fleeing a military offensive in neighboring Myanmar nearly three years ago.

The nexus of poverty and risk was also laid bare by a World Health Organization report that warned Africa is a hotspot waiting to happen, despite so far having escaped the worst of the disease.

Up to 190,000 of them could die, the study published in the journal BMJ Global Health suggested.

A sacristan wearing a face mask disinfects the religious statues inside the Sagrada Familia Church in Mexico City. By ALFREDO ESTRELLA (AFP)

With large populations living in slums, social distancing is all but impossible for many on the continent, and health experts say only a vaccine will prevent widespread infection.

Despite scientists working flat out towards that aim, experts say it could still be many months -- or even years -- away.

And without a robust roll-out plan, even highly developed countries could struggle to take advantage of any breakthrough.

A teacher shows pupils how to clean their hands in a classroom at Saint-Exupery school in the Paris' suburb of La Courneuve. By Martin BUREAU (AFP)

In the US, the man formerly charged with developing a vaccine told lawmakers the government in Washington has no "master plan" to fight the pandemic and is unprepared to distribute enough vaccines to immunize millions of Americans.

"We don't have a single point of leadership right now for this response," said Rick Bright, who was removed from his job last month.

The United States has registered almost 86,000 deaths linked to COVID-19 -- the highest toll of any nation, with a third of all known global infections.

An indigenous girl from Parque das Tribos community leaves a headdress on the coffin of Chief Messias, 53, of the Kokama tribe who died of COVID-19, in Manaus, Brazil. By MICHAEL DANTAS (AFP)

In an interview aired Thursday, Trump again accused Beijing of concealing the true scale of the problem after the virus emerged in Wuhan late last year.

"I'm very disappointed in China. I will tell you that right now," he said.

Asked how the United States might choose to retaliate against what he has dubbed the "Plague from China", Trump said: "We could cut off the whole relationship".

Beijing played down the spat, saying: "To maintain the steady development of China-US relations is in the fundamental interests of the people in both countries."

The US and China are the world's two largest economies, doing hundreds of billions of dollars of mutually beneficial trade every year.

Nevertheless, the US president is keen to make Beijing the bogeyman in an election year when gloomy news has become par for the course.

New figures showed a further three million job losses, taking the newly unemployed to 36.5 million -- more than 10 percent of the US population.

Over a third of them will have trouble paying their bills, a survey has revealed.

States are slashing their budgets because of tax shortfalls caused by the job losses, with California announcing it would have a $54 billion deficit this year.

A fighter loyal to the Huthi rebels keeps guard as volunteers take measures to prevent the spread of COVID-19 in Yemen's capital Sanaa. By MOHAMMED HUWAIS (AFP)

Germany's treasury is also expecting a big hole in its budget, with around 100 billion euros wiped off the tax take in 2020.

Europe's biggest economy has already slipped into a recession, with GDP expected to shrink by 6.3 percent this year -- the biggest contraction since 1949.

The Asian Development Bank on Friday doubled its previous estimate of the cost of the pandemic, saying the world economy would shrink by $8.8 trillion -- almost a tenth of global output.

Up to 242 million jobs will vanish due to the virus, the Manila-based bank said.

'We may need more graves'

People sitting in separate perspex cubicles bid for flowers during an action inside the Multiflora warehouse in Johannesburg. By Phill Magakoe (AFP)

Much of Europe was back on the road to recovery, with more parts of the continent opening up.

Slovenia opened its borders on Friday after declaring an end to its coronavirus epidemic, despite new infections still being reported.

Austria and Germany were expected to open their shared border, while Latvia, Lithuania and Estonia were set to create their own "mini-Shengen on the Baltic", allowing free movement among the three countries.

But in Latin America, the news was looking increasingly dire.

Thousands of fresh graves are being dug in the Chilean capital's main cemetery, as the infection rate soars and as Santiago enters lockdown from Friday.

"We may need more graves, because we see what's happened in other countries," cemetery director Rashid Saud told AFP.