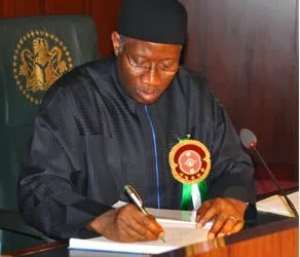 President Goodluck Jonathan has approved the sack of two judges of the high court. This information was relayed to newsmen in Abuja by the Attorney General of the Federation and Minister of Justice, Mohammed Adoke, after a meeting with the President.

The affected judges are Justice Gladys Olotu and Justice Ufot Inyang, who were recommended for sack by the Nigerian Judicial Council (NJC) over alleged gross misconduct.

A statement signed by Soji Oye, the NJC's Acting Director of Information, also confirmed the decision to sack the judges.

“The National Judicial Council has in the exercise of its disciplinary powers under the 1999 Constitution of the Federal Republic of Nigeria as amended, suspended the two judges from office with immediate effect.”

According to the statement, three other judges were issued with warning letters by the NJC on account of declining productivity.

They are Justice Dalhatu Adamu, Presiding Justice of the Court of Appeal, Kaduna Division; Justice A.A. Adeleye of the Ekiti High Court; and Justice D.O. Amaechina of Anambra High Court.